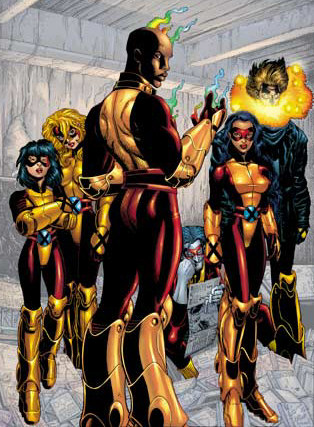 Generation X is a team, a of the franchise published by . Created by writer and artist , the team formed during the 1994 "" storyline, and appeared in their own monthly series in September 1994 with "Generation X" #1 (November 1994).

Generation X consisted of teenage mutants designed to reflect the cynicism and complexity of the series' namesake demographic. Unlike its predecessor the , the team was not mentored by X-Men founder Charles Xavier at his New York estate but by Banshee and former villain at a splinter school in western .

"Generation X" was one of the most distinct and acclaimed X-Books during its first few years but floundered after its original creators left in 1997, leading to cancellation after issue #75 in 2001.Fact|date=January 2008

A superhero team consisting of teenage mutants was nothing new in 1994. The original X-Men of the 1960s had been teenagers and another group of teens, the , existed from 1983 until 1991.

Unlike the X-Men and New Mutants, however, Generation X did not attend Xavier's School for Gifted Youngsters in upstate or learn from avier himself. Instead they trained at the Massachusetts Academy, located in Boston, , and were mentored by Banshee, an Irish X-Man who possessed a "sonic scream," and the former villain White Queen, a sexy, aristocratic telepath.

Furthermore, the team's creators intentionally avoided the trend in X-Books and other comics in which each superhero team includes a "Wolverine character" (rebellious loner), a "Cyclops character" (stoic leader), a "Colossus character" (soft-hearted strongman), etc. They also avoided a criticism often leveled at X-Books, particularly the , that the characters were stereotypes, by creating characters that purposely were the exact opposite of their ethnic stereotypes, e.g. the girl from the Appalachians was the class brain, the Asian girl was the class rebel, the Latino gang member was a nice guy, the girl of African descent was from a wealthy home, etc.Fact|date=January 2008

Generation X consisted of:
* Husk (Paige Guthrie), who could shed her skin, revealing a different substance each time; she was the younger sister of The New Mutants' Cannonball, and elder sister of Icarus.
* Skin (Angelo Espinosa), a former teenage gangster on the streets of Los Angeles who possessed six feet of extra skin. He could stretch his extremities but mostly considered his mutation, which caused him to have sagging gray skin and painful headaches, a curse.
* M (Monet St. Croix), a "perfect" young woman born into a rich family from who could fly, possessed super strength and had telepathic abilities. Her arrogant manner was an annoyance to her teammates and her habit of going into deep trances was a mystery to her teachers. Mysteries surrounding the St. Croix family would play a big part in the series.
* Jubilee (Jubilation Lee), a Chinese-American "mall rat" who could produce explosive energy. Jubilee had been a junior member of the X-Men in the early 1990s.
* Chamber (Jonothon Starsmore), a British mutant who produced huge blasts of energy from his upper chest. When his powers first manifested, they destroyed the lower half of his face and chest, leaving him with only his limited telepathic powers with which to communicate, and releasing him from any necessity to eat, drink, or breathe. Because of this, he is characteristically sullen and bitter.
* Synch (Everett Thomas), an African-American teenager, known for his pleasant, supportive temperament, who could copy the powers of other mutants/superhumans within close, physical proximity.
* Penance, a silent, childlike and mysterious mutant who possessed diamond hard, red skin and razor-sharp claws. Penance appeared mysteriously at the Massachusetts Academy and at first, little was known about her. According to the Generation X Ashcan, the writers originally intended her to be a girl named Yvette from Yugoslavia. A hint of this can be seen when her mind is read by Emma Frost, revealing Eastern European tanks on the march in her memories.Fact|date=September 2008 This background was later changed by the following creative team.
* Mondo, a laidback Samoan mutant who could take on the texture of objects he touched. Mondo was apparently killed in "Generation X" #25 (1997). It was later revealed that the Mondo who died was a clone and the real Mondo appeared two years after the clone's death.

Many members of Generation X debuted during the "" storyline, a crossover spanning across every X-Men-related comic book in the summer of 1994. The Phalanx, an extraterrestrial collective intelligence attempted to absorb many of Earth's mutants into its matrix and captured many of the young mutants who would make up Generation X as "practice" before moving on to the X-Men.

In September of that year, "Generation X" #1 was published, establishing the team at Frost's Massachusetts Academy. It also introduced their arch-nemesis , a -like mutant who sucked the bone marrow of young mutants. As the series continued, fans and critics raved about Bachalo's quirky, complex artwork and Lobdell's realistic teenage characters. The series soon became one of the most popular X-Books.

Lobdell and Bachalo departed in 1997, leaving writer and artist to reveal the long-standing mysteries behind M, Penance and Emplate. Hama revealed that M was in fact an amalgamation of 's two younger sisters who could merge as part of their mutant powers (one was autistic, explaining the trances); Emplate was their brother who, after experimenting with black magic was caught in a strange limbo and needed mutant bone marrow to escape; and Penance was the actual Monet St. Croix, transformed under one of Emplate's spells. All of this was revealed in a surreal, mystic epic in "Generation X" #35-40 (1997-1998) that was greeted with disapproval by most fans (Lobdell's original plan had involved the twins, but did not include a "real" Monet).Fact|date=September 2008

The saga ended with the actual Monet St. Croix taking on the role of M, but fans' reactions did not get much better and sales began to dip.Fact|date=September 2008 Hama's successor attempted to revive the title, bringing in a regular human student population at the school and making Emma's sister another headmistress in "Generation X" #50 (1999).

In 2000, writer , known for his dark, sarcastic style, was hired to revamp "Generation X", as part of the rebranding of several second-tier X-titles (the others being "" and "X-Man"). Ellis acted as 'plotmaster', while Brian Wood handled the actual scripting chores and later acted as sole writer of the series. Fan response was positive, largely because Ellis and Wood dealt with the teenaged cast without resorting to cliché.Fact|date=September 2008 However, in early 2001, Marvel Editor-in-Chief cancelled "Generation X," in addition to five other X-Books, arguing that so many mutant superhero books had become redundant.Fact|date=September 2008 Also, "X-Men" writer wanted to add a new cast of teenage mutants to the Xavier Institute in New York. In "Generation X" #75, the team disbanded and the Massachusetts Academy closed.

Since the end of "Generation X", Chamber and Husk each have had a brief stint in the X-Men, while M, Jubilee and Skin have also appeared in "Uncanny X-Men". Skin, however, was killed by a hate group in 2003, and writer infamously wrote the wrong name on his gravestone.Fact|date=January 2008

Chamber later underwent a mission for the X-Men (under the 'guidance' of Wolverine) to infiltrate and learn the truth about the team. During his time there, Chamber had his face and most of his body restored by Weapon X, as an incentive to join them. He later disappeared with the rest of Weapon X when trying to contact Logan about 'Neverland'.

He subsequently reappeared as an attendee of the Excelsior support group (with his mouth and chest destroyed once more, supposedly in a bar fight) within the "Runaways" series, claiming he was "only there for the free pizza" despite once again no longer having a mouth to eat with. It was revealed (to the reader, not to the rest of Excelsior) that this was merely someone posing as Chamber.

A mini-series entitled "Generation M" debuted in November 2005, focusing on the after-effects from "", in which uses her hex/mutant powers to wish for "no more mutants." The first issue revealed a powerless Chamber (on life-support, due to missing the bottom of his face and most of his chest), and the second issue showed a depowered Jubilee.

Chamber later showed up in "New Excalibur" #9 (September 2006) as a patient at a London Hospital, recounting to a so-called Dr. Hartley the story of how right before his powers burned out on M-Day they went supernova, once again destroying his face and chest. They are interrupted by , who offers Chamber Excalibur's help. As he leaves the two alone for a quick cigarette break, Hartley kidnaps Chamber. Later, Chamber awakes to find himself fully healed but looking similar to the villain Apocalypse as a side-effect. He finds himself a guest of the new Clan Akkaba, worshippers of Apocalypse who had originally appeared in the Marvel , "". In fact, Chamber's great grandfather and Hartley, revealed to be from the aforementioned limited series, were the only survivors of the original Clan Akkaba. Slade reveals that they are all descendants of Apocalypse and that Apocalypse's blood healed Chamber, though he no longer has any powers. Chamber tells them he wants nothing to do with them and is allowed to leave. As he walks outside, he meets Excalibur and tells them in no uncertain words that he doesn't want their help or to have anything to do with any X-Team. After investigating the abandoned headquarters of Clan Akkaba, "New Excalibur" discovers that Chamber was lied to, and that he is indeed still powered. The consequences of this storyline have yet to be resolved. Recently, he has appeared in going under the codename "Decibel," with Jubilee referring to him as Jono and sporting the same physical appearance given to him by Clan Akkaba. Like most of the team, his new powers are more technological in nature, and it appears he can form solid energy projections or sonic blasts much like Songbird or Banshee.

M is currently an employee of , in the "X-Factor" (Volume 3) monthly series.

Jubilee still depowered (though gained new powers through technology), and was last seen in "Wolverine: Origins" #10, and has returned in the second issue of the New Warriors fourth series, in which she is known as .

Penace (now renamed 'Hollow') recently appeared in the mini series, where she was held captive by a ring of drug makers in order to harvest her genetics to create MGH. She was subsequently freed by Ricochet. After a battle with a crazed Phil Urich, she left following him.

In February 1996, the Fox Network aired a made-for-television Generation X movie, produced by Marvel Entertainment. The film featured Banshee and Emma Frost as the headmasters of Xavier's School for Gifted Youngsters and M, Skin, Mondo, Jubilee and two new characters Buff and as students (Chamber and Husk were not written in because the budget didn't allow for the special effects their powers required). The team battled a mad scientist who used a machine to develop psychic powers. The low-budget film was a ratings failure and many fans were angered at the casting of a white actress to play the Asian character of Jubilee. Plans to develop a syndicated series that would air on the same night as popular sci-fi thriller "" (making it a bona fide "X" night on Fox) were abandoned.