The Marauders are mutant assassins employed by the X-Men archfiend Mister Sinister, with the purpose of assassination of other mutants, and act in unison as a commando strike-force to carry out acts of mass murder.

The Marauders makes their first appearance in Uncanny X-Men #210 during the 1986 crossover, the Mutant Massacre, slaughtering a large percentage of the mutant community living beneath Manhattan known as the Morlocks. During their battles with the X-Men, X-Factor including the Norse God Thor, several Marauders are apparently killed; Riptide in Uncanny X-Men #211; Prism in X-Factor #10; and Blockbuster in The Mighty Thor #374. After the Mutant Massacre, Sabretooth attacked some kids in the tunnels in Daredevil #238.

During the 1989 crossover Inferno, the dead Marauders mysteriously reappear alive in Uncanny X-Men #240 and battle the X-Men during the demonic invasion of Manhattan. Most of them perish here. Blockbuster, Malice, and Sabretooth later attacks the X-Men at Xavier's mansion in issue #243.

X-Men #34 (vol. 2, July 1994) reveals that Sinister is able to clone the Marauders back to life; Gambit #8 (vol. 3, Sept. 1999) further reveals that all the clones have gene imprints that would shut them down if they turn against Sinister. In Gambit #9, the clone samples for Sabretooth were seemingly destroyed. However, in later issues of X-Force,[volume & issue needed] a clone of Sabretooth was shown.

The 1996 miniseries, Further Adventures of Cyclops and Phoenix, features a band of criminals known as the Marauders during the 19th century, hired by Mister Sinister to kidnap homeless and deformed people on which to experiment.

Uncanny X-Men #350 (December 1997) reveals that it was Gambit who had organized the modern day Marauders, although he was never actually a member. It also says that it was him who brought them down to the Morlock tunnels. He had no idea of their intentions, and when they started killing all of them, all he could do is save a little girl named Sarah (later Marrow). This contradicts with the comics since in Uncanny X-Men #210, it was shown that the Marauders followed a young Morlock girl, Tommy. This controversy can easily be summed up, since another team showed up consisting of Sabretooth, Prism, Blockbuster in another part of the tunnels. This was most likely the team Gambit brought into the tunnels, since in Uncanny X-Men #350, it shows Sabretooth with Gambit[original research?].

The Marauders also make an appearance in Cable Annual '99, disguised as minions of Apocalypse and battle Cable after he sees through the guise.

The Marauders return in X-Men #200 (vol. 2, August 2007), attacking the X-Men and Providence to obtain certain mutants on a list. This incarnation of the team consists of the original lineup as well as Malice, who possessed Omega Sentinel after disguising itself as an e-mail, and former X-Men Lady Mastermind, Sunfire, Gambit, and Mystique, who have all aligned themselves with Acolytes Exodus, Random, Frenzy, Tempo, and Unuscione.[1]

On the list is a group of people or places that have information of the future, or even alternate timelines. In Cable and Deadpool #42 and X-Men #200, Sunfire and Gambit seemingly killed Cable, while Senyaka attacked Deadpool. Also in X-Men #200, Riptide killed Quiet Bill, and Scalphunter and Vertigo killed the Witness. In issue #202, it is revealed that Arclight brought down the Wohnhaus Strucker, a building that has ties to the future. Also in issue #202, it is revealed that Harpoon impaled Vargas with harpoons until his death. The Dark Mother was another victim taken out. They also thought they killed Gateway, although he survived. Bishop was also sought after in these attacks. Later in issue #202, the Acolytes attack the X-Mansion looking for Destiny's diaries, but find fakes. They also go to take out Blindfold, but she saw them coming and prevented her death. In issue #203, Iceman and Cannonball go against the Marauders for the diaries, but the diaries are destroyed in the process.

The Marauders also play a major role in X-Men: Messiah Complex storyline. In Messiah Complex: Chapter One, they arrive in Alaska and kill some Purifiers with the loss of Blockbuster and Prism, without finding the specical mutant child.[volume & issue needed] In X-Men #205, the Marauders battles the X-Men at Sinister's Antarctic base. In Uncanny X-Men #494, the Marauders track Cable and the baby to Forge's Aerie in Dallas, where they defeat Bishop and seize the mutant child. The Marauders fight in the final battle on Muir Island and Scrambler and Vertigo seemingly all die.

The Marauders appeared once again in the ongoing series of X-Force, where a contingent of Marauders clones had recently awakened after the death of Mister Sinister. The team returns to the facility where Vanisher lost the virus and battle the cloned assassins. 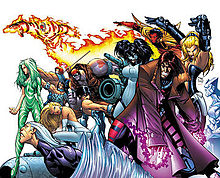 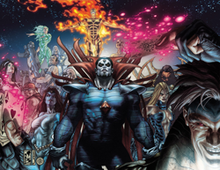 The Marauders in Messiah Complex. Art by Simon Bianchi.

In the Age of Apocalypse storyline, the Marauders are a band of human terrorists equipped with wrist-armories and air-steppers, serving Apocalypse and consisting of Dirigible, Red, Arcade and the Owl. They were notorious cowards with power; hunters by name, but scavengers at heart ever looking for easy targets.[volume & issue needed]

The group was sent by Apocalypse to destroy the land of Wakanda where Arcade was able to murder Black Panther and together destroy much of the land, the Marauders' life was cut short by Clint Barton and Gwen Stacy.[volume & issue needed]

In the House of M timeline, the Marauders are a covert ops group led by Callisto and consisting of T-Rex, Mammomax, Blob, Banshee, Sunder, Black Tom Cassidy, and Caliban.

In the Mutant X dimension, a group of thieves calling themselves the Marauders are made up of mostly X-Force and Generation X associates, such as Sunspot, Wolfsbane, an overweight Cannonball, Jubilee, and Husk.[4]

In the Ultimate X-Men series, the Marauders appear as a white supremacist group led by Arnim Zola.[5]