Mojo is a Marvel Comics supervillain, primarily an enemy of the X-Men and one of its members, Longshot. Mojo is one of the "Spineless Ones," an alien race that is immobile without advanced technology. He is a slaver who rules the Mojoverse, a dimension where all beings are addicted to his gladiator-like television programs. The character is an absurdist parody of network executives.

Created by writer Ann Nocenti and artist Art Adams, he first appeared in Longshot #3 (November 1985). Mojo was the main villain of the 1985/86 cult mini-series Longshot, the title character of which was one of his genetically engineered action stars. Mojo also appeared in issues #4-6 (December 1985-February 1986) of the series. After Longshot joined the X-Men, Mojo has appeared semi-frequently as an X-Men villain.

Most of the denizens of what would come to be called the Mojoverse were slowly driven insane by waves of energy from another space/time continuum. It would take centuries (of their time) for them to discover the origin of these transmissions. Mojo's race did not evolve much because of their inability to stand upright, until a scientist named Arize developed exoskeletons that allowed a fast technological revolution. However, some members of the race refused to use them and called themselves the Spineless Ones. Instead, they used motorized platforms to transport their bodies. They also became the rulers and demanded a race of slaves to do all the tasks they could not or would not do. Arize created the slaves, humanoid beings, using genetic engineering and basing their appearance on the "demons" of the Spineless Ones' nightmares - which were actually the characters of TV broadcasts of Earth-616, somehow scattered throughout their time line and perceived by the Spineless Ones. Unknown to the Spineless Ones, Arize secretly planted the seeds in their genetic make-up to eventually turn on their masters and rule Mojo-world justly. Arize was banished by the Spineless Ones when he refused to build weapons for them.

The power structure of this world was based on the television industry and Mojo became their leader by controlling it, along with the slave trade. Mojo named the world after himself; 'Mojo World' and the universe the 'Mojoverse'. His followers, including Warwolves (vaguely dog-like metallic beings with the ability to kill people and take over the remains of their bodies as skins), became known as Wildways. Mojo also has a Chamberlain, an android named Major Domo, who oversees Mojo's financial records and relays Mojo's commands to his servants. Major Domo is completely loyal to Mojo, but often obeys with sarcastic comments towards Mojo. Major Domo's assistant, a near-constant companion, is called Minor Domo, a hysterical young girl prone to imagining worst-case scenarios.

One of the slaves Mojo had ordered, Longshot, became one of his best stunt performers. However, Longshot disagreed with the rules and led a rebellion (most likely motivated by the death of Jackson, a fellow stuntman). He was captured and had his memories removed, but managed to escape to Earth, followed by bounty hunters. On Earth Longshot found allies in the form of Dr. Strange and the human stuntwoman Ricochet Rita and they managed to defeat Mojo, driving him back to his own world. Longshot, his friend Quark and Rita returned to the Mojoverse to free their fellow slaves. Longshot's mission failed and they were captured by Mojo. Longshot was brainwashed again, while Rita was tied to the bow of Mojo's worldtravelling ship, serving as a guide. In an alternate future, Mojo had Rita transformed into an insane warrior/mage named Spiral and she was sent back in time to capture or kill Longshot.

Mojo became interested in Earth and captured Betsy Braddock, the mutant known as Psylocke, who had been blinded, and implanted bionic eyes in her original body. Much later it was learned that the eyes Mojo gave her were in fact interdimensional cameras allowing Mojo to record and broadcast all she could see. Psylocke was rescued by the New Mutants, and she aided both the New Mutants and the X-Men before officially becoming an X-Man herself. It was later revealed that Betsy's body retained robotic eyes, as her consciousness was switched with the one of a comatose Japanese assassin.

Shortly afterward, Mojo sent Longshot to Earth where he joined the X-Men as well. Mojo had planned on enslaving the X-Men by turning them into children, but the New Mutants managed to free them and together they forced Mojo to flee again. Still Mojo found out that the adventures of the X-Men shot the audience level to top ratings; which increased his political power.

Mojo also manipulated the X-Men member Rachel Summers into working for him, but she soon escaped after realizing she was little more than a prisoner. Further setbacks began as Psylocke's broadcasts stopped when the X-Men were presumedly killed by the Adversary, but Mojo wanted to have footage of the X-Men to improve his ratings, so one of his assistants came up with a possible solution; create versions that could be controlled. Many different versions of the X-Men appeared before him, but he considered them all failures and ordered their death except the X-Babies. The X-babies were an immediate success but they rebelled almost immediately and escaped taking Rita with them.

Mojo reappeared along with an alternate version of Jubilee. Mojo had kidnapped Jubilee, taking her to the "Big Crunch", the end of time where all matter would collapse. Jubilee agreed to be Mojo's slave if he wouldn't interrupt the Crunch. Older and renamed Abcissa, she kidnapped her younger self and took her to the Crunch. Wolverine appeared with a missile and defeated Mojo. Since Jubilee refused Mojo's offer, Abcissa's existence was nullified.

Eventually, Longshot returned to free the slaves and deposed Mojo, with the help of Mojo's upright, more human looking (although yellow) clone Mojo II: The Sequel. However, Mojo II turned out to be just as bad as his predecessor and Longshot had to defeat him as well. After Mojo II was ousted, Mojo reclaimed his position and became the leader of Mojo World once more.

Mojo never learned from his mistake concerning the X-babies and would create more X-Babies, who also rebelled. Eventually all of the X-Men had X-Baby counterparts on Mojo-world, and they all rebelled against Mojo and fled to an area he could not reach. He also created the Mitey 'Vengers (child versions of the Avengers) to finally stop the X-Babies once and for all. Of course, the Mitey 'Vengers, being essentially of the same moral fabric as their adult counterparts, turned on Mojo and defeated him. Finally, he created toddler versions of the Age of Apocalypse villains. These entities were seemingly more intelligent and broke the control Mojo had on them. According to Dazzler these versions were responsible for the destruction of great part of Mojo-World, but apparently Mojo managed to defeat them and again take control of Mojo-World. He then made a deal with the Exiles: in return for Longshot's help, Mojo receives broadcasts from all over the multiverse through the Exiles' crystal palace; prior to this, Mojo had tried to get his hands on Nocturne using the "Exile Legal Eagles," clones of the Exiles' previous lineup.

Later, Mojo reappeared along with the previously vanished Nocturne and Juggernaut, using a "Jean-Bomb" to turn the X-Men into babies, and after his defeat, a guilt-ridden Juggernaut was tempted with the offer of remaining a child, but ultimately refused. Emma Frost made sure that Mojo would be handled by professionals so that he would never bother the X-Men again and was locked away by the Government. But, he is now free once again.

Mojo was one of the villains Beast offered to "sell his soul to" in order to obtain help in reversing the effects of M-Day. Spiral later mentions to Beast that Mojo is displeased with the fact that mutants are now an endangered species and how it will affect his television ratings.

Mojo was recently revealed as the villain responsible for Spider-Man and Wolverine being sent randomly shifting through time, the time-shifts being virtual creations generated by Mojo as a new idea.

Mojo's multi-legged flying platform is armed with various particle beam weapons. It also has a large artificial appendage that can be used as an arm or a slicing weapon and two smaller arms. He is strong enough to hold a human off of the ground with one arm easily. He has several powers derived from magic, including the projection of magical energy blasts. These magical powers are strengthened by the 'worship of his followers' and hence directly linked to the popularity of his TV programs. He cannot be harmed by the touch of Rogue, no matter how long she is in contact with him. He has bear hugged Rogue with much ease until she was left unconscious.

Mojo also is a force of death and corruption; his touch can wither plants and age humans. His prolonged presence on Earth could cause storms and other natural disasters according to Doctor Strange. 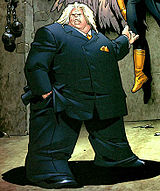 Mojo claims that he and the beings who populate Mojo World are "unique" in the sense that unlike the rest of the Marvel Universe, Mojo World has no parallel counterpart; this was documented in Exiles #18-19, though this is possibly incorrect as an alternate version of Longshot exists in the Ultimate continuity, and an Ultimate version of Mojo has been seen. A cartoon version of Mojo exists, although the cartoon is a retelling of the X-Men mythos. An alternate future reality of Mojo World, where the Spineless Ones were mistreated slaves, was featured in the "Shattershot" crossover.

In the series Ultimate X-Men, set outside the ordinary Marvel continuity, Mojo is not an alien but an ordinary human being. He is a well-dressed, obese albino television producer. He trapped a young mutant fugitive Longshot on an island where humans hunt him as part of a popular reality show. This Mojo also has a Major Domo, a young, fit, human man with a family of his own. Later on he was seen working with Augustus "Gus" Beezer and hired Deadpool and his Marauders to capture the X-Men and bring them back to Krakoa where they were to be executed on live television by the Reavers. He kept Professor X captive and forced him to watch the entire show a la Clockwork Orange by using some kind of collar to disable Xavier's telepathic powers. His plans however were foiled by the combined efforts of the X-Men and Spider-Man, who was also captured during his visit to the X-Mansion. It is unknown what happened to Mojo after this because Xavier seemed to have taken care of him during his escape. In this series, Mojo's full name is Mojo Adams, a tribute to his creator Art Adams.[citation needed] 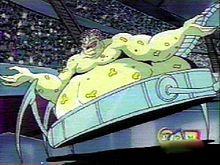 Mojo from "Mojovision" episode of X-Men: The Animated Series