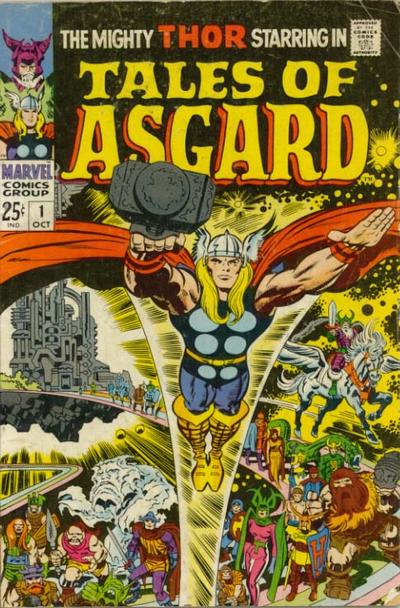 Asgard is a al realm within the universe based on the of and is home to the Asgardians and other beings of Norse mythology. Asgard features prominently in tales of Thor.

In the comic books, Asgard is an asteroid-like world suspended in a "Sea of Space". Gravity radiates from somewhere underneath this asteroid. The top of this "asteroid" is flat like a table. If someone stepped off of this "table", they would fall off the "asteroid" and down through space until they reached the "gravity-generator". Asgard can only be reached from Earth by crossing , the Rainbow Bridge.

In 2008, as a part of the new "Thor" series, Asgard, along with the Asgardians, is brought back from by Thor. The new Asgard is located on a floating landmass outside of Broxton, . Asgard is now fully within the Earthly plane of existence, instead of merely connected by Bifröst, and portrayed as only the city of the gods without the larger realms previously associated with it.

Vanaheim is the home of the Vanir who is the sister race of the Asgardians. Vanaheim is a distinct region on the Asgard planetoid.

Alfheim is the home of the Light Elves. Alfheim is a distinct region on the Asgard planetoid.

is the Earthly plane of existence. Although technically not a part of the Asgardian dimension, it is considered one of the Nine Worlds by the Asgardians because of its significant connections to Asgard.

Jotunheim is the home of the Giants.

Svartalfheim is the home of the Dark Elves.

Hel is the realm of the dead who are neither honored nor dishonored. It is ruled by Hela.

Muspelheim is the home of the Demons. It was ruled by Surtur before he disappeared.

Valhalla is a realm of the honored dead and is a distinct region on the Asgard planetoid.

Niffleheim is the realm of the dishonored dead which is distinct but closely connectioned to Hel.

The Asgardians live in Asgard and are the most human-looking and powerful of the races but are not, unlike the other races, believed to be native to Asgard.

The Giants live in Jotunheim.

The Dwarves live in Nidavellir.

The Trolls live in scattered settlements throughout Asgard, Vanaheim, Svartalfheim, and Jotunheim.

The Demons live in Muspelheim.

All known Asgardian races have super-human strength and are extremely long lived, not truly immortal like The Olympians but long enough lived to seem ageless. Each group has especially dense body tissue rendering most of them bullet proof to at least small caliber weapons. Ulik resisted high powered, armor piercing rounds but it should be noted that he is the strongest of Rock Trolls and is probably more durable as well. The Asgardians have been shown to be bullet resistant but not completely unscathed from damage by them.

All Asgardian races have the natural ability to harness eldritch energy (magic) far more easily than humans. It has previously been stated by that personal vitality is a key factor in ones ability to harness magic and since Asgardians are many times more durable than humans they can manipulate far greater magics than most human beings. Unlike human beings all Asgardians continued existences are tied into the continued health of the world tree Yggdrasil.