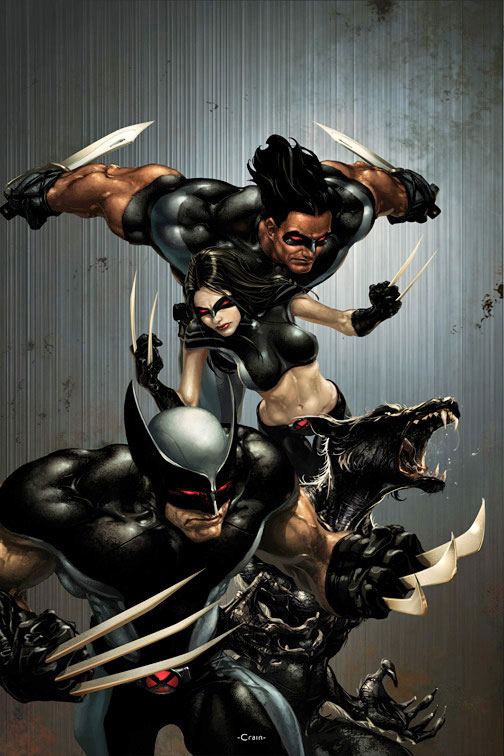 X-Force is a team, one of several s of the popular franchise. Conceived by writer/illustrator , the team was formed in "The New Mutants" #100 (April 1991) and soon afterwards was featured in its own eponymous series.

The group was a new incarnation of the 1980s team, the New Mutants. Led by the gun-toting mutant Cable, X-Force was more and aggressive than the X-Men.

Although criticized for emphasizing flashy art, big muscles and guns over character development, "X-Force" was tremendously successful in the early 1990s.Fact|date=September 2008 The series' popularity waned after Liefeld left, causing Marvel to implement several reforms in the title from 1995 until 2001 with varying degrees of success.

Low sales on the series prompted Marvel to revamp the title in 2001 with a new cast in the form of a group of self-interested young mutants who were gathered together by a corporation to become media stars and used the name X-Force. "X-Force" (vol. 1) was cancelled with #125 and relaunched as "", which featured the later incarnation of the team.

After "X-Statix" was cancelled with #26, Marvel reunited the original X-Force team for a six-issue 2004 miniseries plotted and drawn by Liefeld.

In 2007-2008, during the "" crossover, a new version of X-Force was formed that had Wolverine leading a more militaristic black ops branch of the X-Men, forming the basis for a new X-Force series starting February 2008 by writers and , plus as the artist.

X-Force was created by illustrator Rob Liefeld after he started penciling "The New Mutants" (vol. 1) comic book in 1989 with #86. The immense popularity of Liefeld’s art lead to him taking over the writing and drawing duties on the book, which allowed him to introduce Cable and several other new hard-edged characters in 1990 and 1991. With help from writer , who provided the dialogue for Liefeld’s plots, Liefeld transformed the New Mutants into X-Force in "The New Mutants" (vol. 1) #100, the book's final issue. Liefeld and Nicieza launched "X-Force" (vol. 1) in August 1991. The original line-up of the team included:

* Boom Boom, previous member of the New Mutants and a rebellious teenager who could produce “Time bombs”.
* Cable, originally a mysterious -toting mutant, later revealed to possess and telekinesis, although he continued to rely on firearms.
* Cannonball, a Kentuckian and prior member of the New Mutants who flew at jet speeds and projected a force field around himself when flying. Cannonball was the team's second-in-command under Cable.
* Domino, a world-class mercenary who possessed “luck powers,” allowing probability to turn in her favor and who was Cable’s lover. Later, it turned out that this woman was in fact the shapeshifter Copycat who had taken the place of Domino. The real Domino was still just a friend of Cable and had been imprisoned by Copycat's employers. The real Domino joined X-Force some time after her impostor was exposed.
* Feral, a cat-like mutant with claws, fur, and enhanced senses.
* , a sword wielding warrior from Mojo World who possessed superb fighting skills and limited energy-projection abilities.
* Warpath, an who, like his brother, the short-lived X-Man Thunderbird, possessed super strength and speed.

In issue #3, X-Force would be joined by:

* , the daughter of the Irish X-Man Banshee who inherited her father’s “sonic scream” and ability to fly.

Later, in issue #15, two former New Mutants who had left before the team's evolution into X-Force joined:

* , a Mexican who produced powerful shockwaves.
* Sunspot, former New Mutant and citizen of who absorbed and rechanneled solar energy.

The main opponents of X-Force during its first year were the terrorist , led by , a masked mutant with a mysterious link to Cable. Early issues also featured the wise-cracking mercenary Deadpool, the immortal , and a new version of The Brotherhood of Evil Mutants, the X-Men’s oldest enemy group.

Propelled by Liefeld's art, "X-Force" became one of Marvel’s best-selling comic books immediately after its debut. The series rivaled "" and "Uncanny X-Men" in popularity, particularly with the adolescent demographic.Fact|date=September 2008 Toy Biz responded to X-Force's popularity by introducing an X-Force action figure line alongside its X-Men action figure line.

Writer and painter parodied X-Force and other anti-hero groups from the early 1990s in the 1996 miniseries "Kingdom Come", which portrayed a future where a generation of violent anti-heroes had replaced the familiar DC characters. Their leader Magog bore an intentional resemblance to Shatterstar and Cable.Fact|date=September 2008

Liefeld illustrated the series up to #9 and stopped plotting it after #12 as Liefeld had become increasingly frustrated that he did not own the characters he created and that his art was being used on a variety of merchandise while he received little . Along with six other popular Marvel artists, Liefeld left Marvel Comics along with six other Marvel artists in 1992 to form .

"X-Force" continued with Nicieza writing and illustrating. Nicieza, who also wrote "X-Men" (vol. 2), helped plot the "" storyline that overlapped into most X-Men related books in the fall of 1992. In that story, Stryfe frames Cable for an assassination attempt on the X-Men’s founder , leading to a clash between the X-Men and X-Force. The crossover boosted Cable's popularity, despite the character's apparent death in "X-Force" #18, leading to his own solo series being launched in 1993.

Due to falling sales,Fact|date=May 2007 "X-Force" emerged from the "Age of Apocalypse" event with a new creative team of writer and illustrator , who significantly revised the team with issue #43. Loeb introduced new team uniforms, had the team move in with the X-Men at the , and placed emphasis on character-driven stories with fewer fight scenes. Rictor quit the team and Cannonball joined the X-Men. Caliban, a super-strong albino mutant who possessed the mind of a child, joined the team. Loeb's stories included revelations about Shatterstar’s origin and the transformation of Boomer (formerly Boom Boom) into the more aggressive Meltdown. Fan response was generally positive.Fact|date=September 2008

In 1997, writer John Francis Moore, portrayed the team has carefree walkers exploring the open road and had X-Force brake away from Cable and the X-Men. The roster of that incarnation was Meltdown, Siryn, Sunspot, Warpath, and Danielle Moonstar. This was one of most acclaimed eras of the series, with warm reaction from fans and critics alike.Fact|date=September 2008

In 1998, Moore and new artist had X-Force move to a new headquarters in San Francisco, returned Cannonball and later Domino to the team, and added Bedlam, a mutant who could disrupt electronic equipment. However, towards the end of this run, sales on the title began to fall drastically.Fact|date=September 2008

Writer , who was known for his dark, cynical style, revamped three books, ("X-Force", "Generation X", and "X-Man"), as part of the Revolution revamp of the X-Men series of titles in 2000. Ellis' stint on "X-Force," co-written by and illustrated by , saw Bedlam, Cannonball, Meltdown, and Warpath become a covert ops superhero team under the leadership of , a British mutant and former intelligence agent who could shoot burning blades of energy from his fingers. Sales remained about the same despite the changes in creators. [ [http://www.cbgxtra.com/Default.aspx?tabid=695 CBGXtra.com - Comics Sales Charts] ]

In early 2001, "X-Force" was completely reimagined by writer and artist , who replaced the existing incarnation of the team with an entirely different group of mutants using the X-Force name. In "X-Force" (vol. 1) #115, Bedlam, Cannonball, Meltdown, and Warpath all appeared to die in an explosion, though all later subsequently returned. The next issue, #116, saw the introduction of a new, sardonically-toned X-Force consisting of colorfully dressed and emotionally immature young mutants put together and marketed to be media superstars. "X-Force" was canceled with #129 in late 2002 and replaced with retitled "" in late 2002.

"For more details on this version of X-Force, see ."

Although all members of the final version of the first X-Force were apparently killed in an explosion, it was later revealed that they survived but had disbanded.issue|date=September 2008

In 2001, "New X-Men" writer introduced , a global mutant rescue mission. Since then, many former members of X-Force have been seen in various X-Men related books as X-Corp operatives: Sunspot in Los Angeles, Domino and Risque in , Cannonball, Rictor and Siryn in , and Feral and Warpath in . More recently, Cannonball has been an member and Domino joined the new Six Pack in "".

In 2004, Marvel released a new six-issue "X-Force" mini-series, once again plotted and illustrated by Liefeld, with dialogue by Nicieza, that gathered many of the characters featured in the first "X-Force", to critical panning yet decent sales.Fact|date=February 2007 Some controversy arose from Liefeld's insertion of over ten pages from previous unpublished comic books ("Wolverine" and "Cable: First Contact") with word balloons edited to make them fit the "X-Force" storyline.Fact|date=September 2008 It was subsequently followed with a 4-issue prequel "X-Force: Shatterstar" miniseries.

As of late 2007, Cannonball, Caliban and Warpath are members of separate teams of X-Men; Caliban recently sacrificed himself to save Warpath. Rictor and Siryn have joined , and Boom-Boom/Meltdown is in the superhero comedy series "". Not all members have moved on to other teams; Feral and Moonstar are no longer mutants, having lost their powers due to the events of "M-Day". Feral was later seen repowered in "Wolverine" (vol. 2) #54 and killed by a Weapon X-influenced Sabretooth. Moonstar is now an instructor for at . Shatterstar and Domino recently appeared in "" when they attempted to free , operating as X-Force.

In the "" storyline, specifically " "#493, orders to form a new version of X-Force and hunt down Cable. Wolverine selects the 's best trackers, Warpath, Caliban, Hepzibah, Wolfsbane, and .

The new X-Force eventually locate Cable and defend him from an attack from and the , a battle in which X-23 all but kills Lady Deathstrike and Caliban is shot dead by a Reaver.

Marvel Comics revealed at the Baltimore Comic-Con on that a new X-Force ongoing series will be launched in the aftermath of the "" crossover in February 2008, written by and Fact|date=September 2008 and drawn by . The team's lineup consists of Warpath, Wolfsbane, Wolverine, and . [ [http://www.comicbookresources.com/?page=article&id=11385 Comic Book Resources > CBR News: X-POSITION: "X-Force" & "Cable" Special Edition] ] The team's enemies include the and their leader , the reassembled Bastion, as well as a team of anti-mutant humans composed of , the , and the resurrected , , Stephen Lang and .

Issues #57 and #58 of the first series were part of the Onslaught storyline which was a top vote-getter for the "" Fan Award for Favorite Comic-Book Story for 1997.

Before the team best known as X-Force debuted, Marvel introduced an unrelated, little-known group also called X-Force. It was a short-lived group that was designed to replace Freedom Force. The members were not mutants, but received their powers artificially and were named after the X-Men. This group was organized by a government agency known as M Branch and only appeared in the pages of "Cloak and Dagger" #9-10 (1990).