Nasty Boys
This article is about the comic book villains. For other uses, see Nasty Boys (disambiguation).

The Nasty Boys, sometimes referred to incorrectly as the Nasty Boyz, are a group of supervillain mutants who have appeared in various comic book series published by Marvel Comics. This group exists in Marvel's shared universe, known as the Marvel Universe.

They are the personal strike force of X-Men and X-Factor nemesis Mister Sinister. The Nasty Boys can be distinguished from the Marauders, who were a group of mercenaries brought together by Mister Sinister to specifically kill the Morlocks.

Self-proclaimed "Nasty Boy" Slab faced X-Factor member Strong Guy before the full team appeared,[1] The full team battled X-Factor in the next issue seemingly led by U.S. Senator Steven Shaffran. Shaffran was, in fact, a disguised Mister Sinister who had taken the Senator's form in order to publicly discredit him as a mutant terrorist. While Sinister's reasons for doing this remain somewhat mysterious (as do most of his actions), it was probably because Shaffran was attempting to use his "ricochet" probability powers on different members of X-Factor, with the ultimate goal of killing them. Sinister's interest in the Summers' bloodline probably caused him to intervene, as he did not want anything happening to Alex Summers, X-Factor's leader Havok.[2]

The Nasty Boys were taken into custody following their first appearance and battle in Washington D.C. Ramrod is subsequently deported from the U.S. due to his immigrant status. Both Hairbag and Slab are rescued from prison by the Mutant Liberation Front (MLF). Sinister collects Hairbag from them, but Slab stays with the MLF for several weeks to spend time with his sister, the MLF's Thumbelina.[3]

The five members of the Nasty Boys are reunited when Sinister orders them to capture and kill former Maurader Malice. Malice interrupts the Hawaiian vacation of Havok and his girlfriend Lorna Dane (a.k.a. Polaris) in order to kill the latter mutant, whom she fears (at Sinister's request) she may be forced to bond to permanently. The Nasty Boys have a hard time controlling the situation, as Malice continues to jump back and forth between Alex and Lorna. She uses their considerable powers against anyone in her way. Both Alex and Lorna are willing to die in order to end Malice once and for all, and their combined willpower forces Malice to be stuck between them, allowing Sinister to trap and eventually kill her. The Boys get away, as their battle does not draw the attention of the local authorities until after their getaway.[4]

Later, one Nasty Boys member, Ruckus, appears at a speech given by Senator Kelly in an attempt to assassinate the senator. The X-Men stop Ruckus, and he is placed in custody.[5]

There are five Nasty Boys: 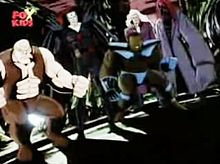 The Nasty Boys as shown on the X-Men animated series

While the Nasty Boys are barely a footnote in the extensive history of the X-Men comics, the villainous team was featured several times in FOX's 1992 X-Men animated TV series, apparently used as the series' version of Sinister's Marauders. Appearing first in the episode "'Til Death Do Us Part, Part II", the cartoon featured four of the Boys: Gorgeous George (the Boys' field leader), Ruckus, Hairbag, and Slab; Ramrod never appeared in the series. The X-Man Morph, who had been resurrected by Sinister, had an "evil" side to his personality. "Evil" Morph was often a part-time member of the Nasty Boys, but Sinister increasingly lost control of him.

The Nasty Boys reappeared in both parts of "Reunion" where, teamed with the Savage Land Mutates, they proved to be quite imposing to the X-Men whom Sinister had rendered powerless. The X-Men eventually regained their powers, freed Morph from Sinister completely, and defeated Sinister and the Boys. After leaving the Savage Land, the Boys reappeared with Sinister in all four parts of "Beyond Good and Evil". Vertigo apparently accompanied them (Sinister had given her a Magneto-inspired energy boost in "Reunion") and was made into a member, despite her female status. (In the comics, Vertigo was originally a member of the Savage Land Mutates, but then ended up joining the Marauders and helped to annihilate most of the Morlocks during the Mutant Massacre.)