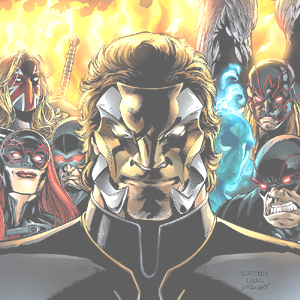 Shadow-X (also known as the Dark X-Men) is a group that first appeared in New Excalibur #1. All of their costumes are the colors of black and red.

They are not officially given a name until New Excalibur #19 where they are referred to as Shadow-X in the "Previously..." section and by Juggernaut on the final page of the issue. How this name came about is unexplained, and prior to this the team was called the Dark X-Men by fans, reviews, and even the Marvel preview descriptions. It likely refers to the fact that the team was created and controlled by the - the Shadow King's "Shadow X"-Men.

They are from an alternate dimension and were brought to the mainstream Marvel dimension during the events of Decimation. The took control of the of their reality and then was able to subvert all of the X-Men to serve him. When they were brought to the Dark Professor Xavier tried to bring Nocturne, Marvel Girl, and Shadowcat under his control, but he was defeated by them, with help from Sage, and later placed in prison.

Lionheart then threatens the rest of Shadow-X, but this fight is interrupted by the immediate arrival of the New Excalibur team. New Excalibur is short-handed because of Nocturne's recent stroke and Sage infiltrating Albion's ranks, but they are able to effectively work as a team and successfully take down Shadow-X. New Excalibur and Shadow-X both try to stop Lionheart, but they are too busy with their opponent team to be successful and she escapes. Then New Excalibur start to interrogate the Shadow-X about what was happening between them and Lionheart ["New Excalibur" #20] .

In the final battle against Albion, Dark Marvel Girl is mortally wounded while saving Nocturne's life. Still, despite her injuries, Jean and Nocturne find the source of the technology blackout. Meanwhile, Lionheart helps Dark Iceman against the rest of the Shadow Captains before he dies and withers away into a skeleton. Juggernaut, Dazzler, and Wisdom help Sage to overpower her Britannia personality. Sage then helps Cap against Albion. Together, they beat their foe as Dark Marvel Girl restores technology before she dies.

Afterwards, with his last breath, Dark Iceman banished the vast majority of the snow he’d created. The amount that was left provided civic minded superheroes to do their share of cleaning up as well opportunity for the citizens of London to play.

The Dark Beast that is a part of this group is not the same as the one from the . Furthermore, this version is in human form, unlike the Age of Apocalypse and versions.