Marvel Knights is an imprint of Marvel Worldwide, Inc. that contains material taking place within the mainstream Marvel Universe (Earth-616).

In early 2006, Joe Quesada, who had since become Marvel's editor-in-chief, announced that all ongoing titles under the Marvel Knights banner would move to the Marvel Universe imprint and that Marvel Knights would now contain high profile limited series. Quesada explained that Marvel Knights "is the showcase for 'evergreen events' — self-contained limited series that think outside the box, that challenge readers to re-think their favorite Marvel characters and re-evaluate the legends that surround them. In other words, Marvel Knights will be a place for top talent to work without constraints, and deliver the kind of product fans deserve!"[1]

Fury: Peacemaker, by Garth Ennis and Darick Robertson, was the initial limited series to launch from the redefined imprint in February 2006. This was followed up with Silver Surfer: Requiem by J. Michael Straczynski and Esad Ribic (2007), Spider-Man: Reign by Kaare Andrews (late 2006), Ghost Rider by Garth Ennis and Clayton Crain (2007), and Captain America: The Chosen (September 2007).

"These stand alone stories won't just challenge readers to re-think their favorite Marvel legends," said Marvel Knights editor Axel Alonso. "Oftentimes, we'll focus on characters that are off the beaten path—boiling these archetypes down to their cores. We want to build on the tradition of limited series like Ennis and Crain's Ghost Rider, Frank Cho's Shanna, the She-Devil and Robert Rodi and Ribic's Loki — each of which offered very distinct visions for Marvel characters, and each of which — judging by sales numbers — were embraced by fandom."[citation needed]

Marvel Knights as a team

The Marvel Knights moniker was used as a nickname for Daredevil's unnamed superhero team, which included Black Widow, Dagger, Luke Cage, Moon Knight, and Shang-Chi. The team initially formed to capture the Punisher. 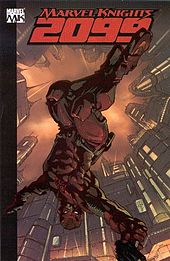 In 2004, Marvel Comics held a fifth-week event called "Marvel Knights 2099", which took place in the future on an alternate world (Earth-2992) that was not identical to the alternate Marvel Universe on Earth-928 featured in the 1990s Marvel 2099 books.

The Ultimate version of the Marvel Knights team made its debut in Ultimate Spider-Man #106. After Shang-Chi made an unsuccessful attack on the Kingpin, he was recruited by Daredevil to help bring down the Kingpin for good. Later, Daredevil, as Matt Murdock, met Spider-Man and asked him to join the group, with the plan of killing the Kingpin. Spider-Man objected to killing, and the group agreed to let Moon Knight, under the persona of Ronin join the Kingpin's employ. Ronin forcibly brought Spider-Man to the Kingpin as a captive. The Kingpin ties him up, unmasks him and tortures him and mocks him for being a teenager. After revealing that he knew that Ronin was Moon Knight, Kingpin had him beaten nearly to death, and let Spider-Man leave with the knowledge that one of the Knights was a traitor.

After a bomb destroyed the law offices of Matt Murdock, Iron Fist was revealed as the traitor, though only because Kingpin threatened his daughter. Iron Fist was sent back to Kingpin to distract him while Daredevil tried to kill his comatose wife. After a standoff between Daredevil, Kingpin, and Spider-Man, Kingpin agreed to leave the country in exchange for his wife's safety, but he secretly and furiously plotted to have Daredevil killed, Dr. Strange's hands broken, and Spider-Man's school blown up. Meanwhile, Moon Knight went to the police, revealed his secret identity, and said that Kingpin tried to kill him, which gave the police enough to arrest Kingpin on attempted murder charges. At the end of the arc there were brief images of the team going their separate ways: Shang-Chi caught a train out of town, Iron Fist returned to his daughter, Dr. Strange went back to his sanctum, and Daredevil berated himself at a church.

In the Marvel: Ultimate Alliance video game, Marvel Knights is considered a team bonus if you have any combination of the following characters on your team: Black Panther, Daredevil, Doctor Strange, Wolverine, Luke Cage, Spider-Man, Elektra and Moon Knight.

Marvel Knights is a branch of Marvel's film line, focusing on producing darker titles such as Punisher: War Zone and the upcoming Ghost Rider: Spirit of Vengeance.

In April 2010 it was announced that Shout! Factory and Marvel teamed up to release a series of Animated Series on DVD[2]. The following titles have been released thus far: