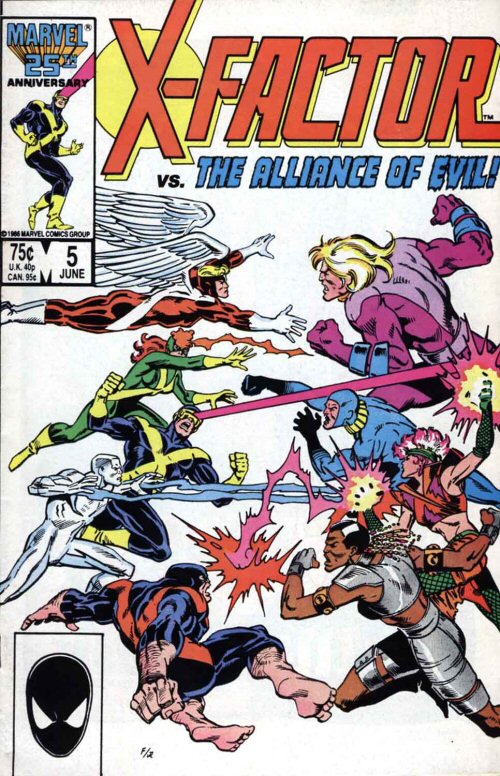 The Alliance of Evil is a name used for a group of that appear in published by .

The Alliance of Evil first appeared in "X-Factor" #5-6 (June-July 1986), and was created by writer and artist . Two of its members, Tower and Frenzy, had appeared before the rest of the team.

The Alliance of Evil" received an entry in the "Official Handbook of the Marvel Universe Update '89" #1.

The Alliance of Evil was once Apocalypse's personal strike force, and carried out his bidding. Their first mission was to find and capture Michael Nowlan, a mutant with the ability to heighten other mutants' powers. When Nowlan tried to leave, they kidnapped his girlfriend, Suzy, to use as bait. X-Factor found Nowlan and vowed to protect him. When the Alliance traced him down, they threatened Suzy to make him power them up. The Alliance fought and defeated X-Factor, bringing Nowlan back to their master. X-Factor eventually found their hideout, and on Apocalypse's orders Nowlan powered up the Alliance again. When Suzy tried to escape, Stinger's bolts accidentally kill her. Nowlan killed himself, and Apocalypse abandoned the Alliance of Evil and escaped. ["X-Factor" #5-6 (June-July 1986)]

Much later, the Alliance of Evil caused a commotion over the Mutant Registration Act. X-Factor saw them on the news and immediately attacked the Alliance. They were defeated by X-Factor and taken into custody by Freedom Force. ["X-Factor" #33 (October 1988)]

The group, minus Timeshadow, later encountered the , along with Harness and . They were defeated, and when questioned later, Frenzy admitted to being hired by A.I.M. to bodyguard Harness and Piecemeal. She was then dropped out of a helicopter. ["New Mutants Annual" #7 (1991)]

The group eventually disbanded. Frenzy went on to join the ranks of Magneto's Acolytes, Tower was killed by the , ["Uncanny X-Men Annual" #17 (1993)] and Stinger and Timeshadow have not been seen since.

* Frenzy (Joanna Cargill) - field leader of the Alliance, a super-strong mutant with steel-hard skin and resistance to temperature extremes. At first glance, she seems like your typical strongwoman, but she is actually quite intelligent. She later went on to join Magneto and his Acolytes, and eventually mind-controlled to join the . She has currently returned to the Acolytes, having retained her mutant powers.
* Tower - a mutant with the ability to increase his size and strength. He is probably the most reckless out of the group, and isn't very bright. Tower was killed by the mutant-hunting issue.
* Stinger- a young valley girl with electricity control. Her current whereabouts and status are unknown.
* - who had the mutant power to phase into time, allowing himself to teleport in a way, or appear to be in several places at once. His current status and whereabouts are unknown.
* Michael Nowlan - who was captured and forced to "join". Currently deceased ["X-Factor" #6] .