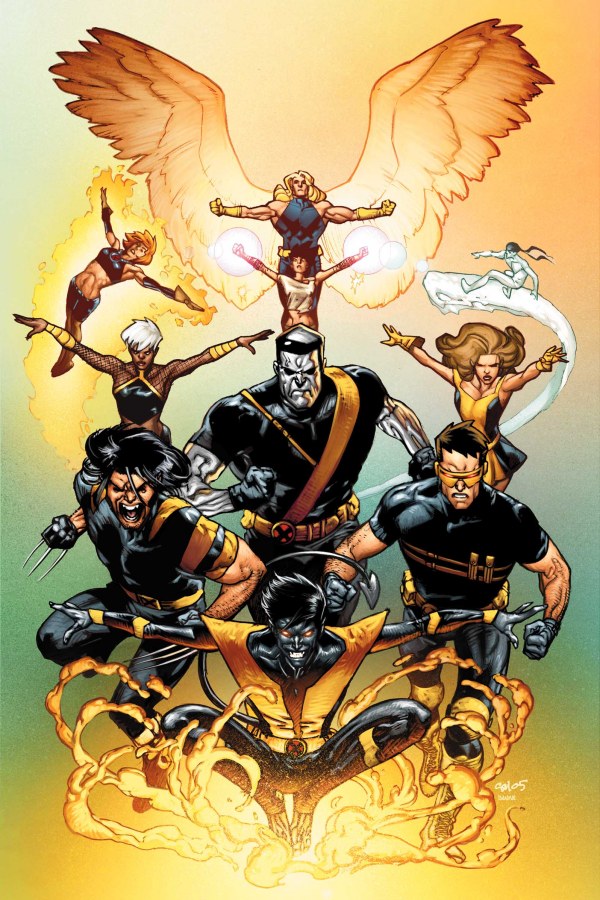 "Ultimate X-Men" is a series published by . The series is a modernized re-imagining of Marvel's long-running comic book franchise as part of its imprint. The Ultimate X-Men exist alongside other revamped Marvel characters in Ultimate Marvel titles including , The Ultimate Fantastic Four, and The Ultimates.

The protagonists are the X-Men, a group of mutants whose unusual genetics grant them super powers. This sets them apart from the rest of humanity. They are led by Professor Charles Xavier, the world's most powerful telepath. Readers familiar with the original X-Men may recognize many familiar characters and storylines. However, "Ultimate X-Men" almost completely ignores supernatural or mystical elements as plot devices. The X-Men have no secret identities, and the mutants are mistrusted and hunted down.

The series began in 2001 under writer and artist . As of , it is currently written by and penciled by Mark Brooks.

Upon its release in , "Ultimate X-Men" was the second comic of the line, preceded a few months by its sister title "". The heads of the Ultimate Universe, and , originally tried to hire to write the title, but he declined.

Common to the Millar period was an edgy tone, featuring quick action-driven plots and less moral X-Men. For instance, Wolverine tries to kill Cyclops in "Return of the King" because he is envious of Jean's love. In an interview with Sequential Tart, Millar commented: "You're not competing with on these books; you're competing with 'Buffy'. (...) Superhero comics aren't adult, but they shouldn't be written for five year olds either." Millar shaped "Ultimate X-Men" into a commercial hit, consistently outselling its sister titles, "" and "" and staying just behind 's experimental and popular "New X-Men" run. [ [http://www.icv2.com/articles/news/1850.html ICv2News: ICv2's Top 300 Comics & Top 100 GN's Index] ]

After Mark Millar's run, "Ultimate Spider-Man" writer Brian Michael Bendis took over for a year. Bendis stated that he was going to interpret his run in a more character-driven way, especially concerning Wolverine, who had previously tried to kill his teammate Cyclops. Bendis' run was marked by the relative absence of major villains and was also notorious for killing Beast, who was killed when a Sentinel attacked the White House during Frost's public disclosure of her school. This made the character the first dead Ultimate X-Man. As a side note, Ultimate X-Men #40 features what Marvel claims to be the first marriage proposal in a comic book letters column, which is answered in Ultimate X-Men #44 with a positive response.

The third "Ultimate X-Men" writer was , more known at the time for his work on '. His run was marked by the relative absence of Wolverine as the main character and the re-imagination of second-string "X-Men" characters who he felt were underused or "shoehorned". He introduced Mr. Sinister as a mutant-killing scientist with hypnotic/ stealth powers in The Tempest (#46-49), German twins Fenris as mutant corporate criminals in Cry Wolf (#50-53), as well as Mojo and Longshot, respectively, as a corrupt TV producer and a mutant felon in The Most Dangerous Game (#54-57). It is worth mentioning that both are of non-alien origin in this world and have the civilian names "Mojo Adams" and "Arthur Centino", a play on their creators' names, specifically writer and artist . Further arcs were centered on Professor X (#58) and Deathstrike in Shock and Awe (#59-60). Lady Deathstrike possesses adamantium claws and regenerative powers. Vaughan also reintroduces Emma Frost's mutant team and Magneto in Magnetic North (#61-65)"'. As a side note, his run finally confirmed Ultimate Colossus' homosexuality. [ [http://www.newsarama.com/marvelnew/UltWeek/images/UXM/UXMBKV.html Newsarama.com: An Ultimate Fifth: Brian K. Vaughan on Ultimate X-Men] ]

Vaughn's tenure was followed by , author of and . Kirkman's tenure was noted for adapting several major story arcs from the regular X-Men series. These included Jean Grey's transformation into Phoenix, the arrival of Cable and Bishop, and the appearance of Apocalypse. Kirkman reintroduced Wolverine as an important character and played with issues of team loyalty. Under his authorship major characters such as Nightcrawler and Colossus left the team. His tenure also featured Cyclops' decision to turn Xavier's into a more traditional school and consequently disband the X-Men. When this was done an alternate team of X-Men was formed by Bishop as part of the upcoming fight against Apocalypse.

"Ultimate X-Men" quickly established itself as a hit comic, lauded by critics and popular with the fans. The following table shows the development of comic sales in comparison to the mainstream titles. [Diamond Comics http://www.icv2.com/articles/news/1850.html]