There have been several groups of s in the universe who have been known as the Hellions. These groups were foes of various teams of younger mutant heroes in the franchise.

The original, and most notable, of the groups of Hellions were students of and trainees of the Hellfire Club. They were attending classes at the White Queen's Massachusetts Academy while training in the use of their powers in an underground complex beneath the school. They were longtime rivals of the , and once held their own against the X-Men. Most were killed by the er and a number of Sentinels. The White Queen's guilt over their deaths led to her eventual reform.

*Catseye (Sharon Smith) ["New Mutants" #16] - could transform her body into a purple feline or semi-feline state and shift her size between that of a house cat or a panther with razor sharp claws, enhanced senses, physical attributes, and a prehensile tail. Originally believed she was a cat with the ability to transform into a human.
*Empath (Manuel de la Rocha) ["New Mutants" #16] - able to sense and manipulate the emotional states of other living beings.
*Jetstream (Haroun ibn Sallah al-Rashid) - generated bio-thermal energy that allowed him to propel himself through the air and move at superhuman speeds. Aided in flight by bionically implanted jets that focus his energies, and a cybernetic guidance system.
*Roulette (Jennifer Stavros) - Could psionically influence probabilities, usually by means of colored disks of energy she generated that altered probabilities: red for good luck, black for bad.
*Tarot (Marie-Ange Colbert) - psionically materializes the images on her tarot cards into three-dimensional constructs or as apparel for herself and others (such as the shroud and of Death), as well as limited precognitive ability (focused through her tarot cards).
*Thunderbird (James Proudstar) - possessed superhuman physical attributes, senses, and healing ability.

*Beef (Buford Wilson) - possessed superhuman strength and limited resistance to injury.
*Bevatron (Fabian Marechal-Julbin) - capable of generating powerful bioelectric blasts from his body.
*Firestar (Angelica Jones) - able to manipulate and project microwave radiation, granting flight, heat projection, and massive destructive potential.
*Magma (Amara Juliana Olivian Aquilla) - possesses psionic and geothermal powers that allow her to control the tectonic plates beneath her, causing minor s and also which she can cause to erupt like mini volcanoes, and assume a fiery form in which she can generate and project blasts of intense heat and flame.

:Note: For a brief period, many members of the New Mutants were transferred to the Massachusetts Academy at Magneto's (then-Headmaster of Xavier's School) request, due to his students' need for psychic assistance from the White Queen to recover from severe psychological trauma after being wiped from existence and then later resurrected by the in . While at the Academy, all of the transferred New Mutants were inducted into the Hellions; they later returned to Xavier's School after their recovery and the revelation that the White Queen had employed Empath to coerce Magneto into allowing the transfer. The entry for the Hellions in 2006's "All-New " lists these New Mutants as one-time members of the Hellions: Wolfsbane, Karma, Cannonball, Cypher, and Magik. Magma was also among the afflicted New Mutants who transferred at this time; she returned to Xavier's School with the others, transferring back to the Massachusetts Academy later, after Magneto joined the Hellfire Club as its White King and relations improved between the two factions.

The next group of Hellions was organized by the parasite to attack Generation X. This group appeared only once. One member, Vincente, had been a member of the timeline's version of Generation X; another, Bulwark, appeared alongside Emplate in later stories only to be captured and killed by . Also among this group was , the former girlfriend of Generation X member Chamber, D.O.A., and a mummified mutant named Murmur.

A second group (led by Emplate) made a one-issue cameo in "Generation X" #57. Their ranks consisted of Wrap another mummified mutant whose body was made of raw energy which increased his strength, Vincente who now had the ability to change the chemical composition of his vaporous form, a female who could release psionic bolts of "Ebon" energy which disrupt the central nervous system of her targets or destabilize molecular bonds in inorganic materials, and the ubiquitous DOA.

Of note is the fact that Emplate never called his group the Hellions, but it was only in the advertising. 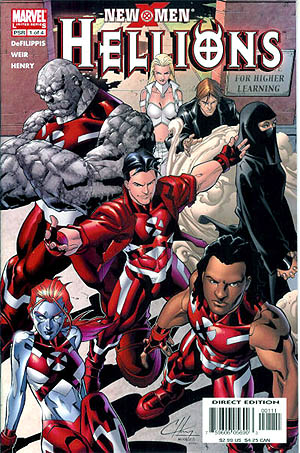 Mercury
Rockslide
Tag
Dust
Wither
Icarus (quit)
memberlist=
subcat=Marvel Comics
hero=y
villain=
sortkey=PAGENAME|A new group of Hellions debuted in "" (vol. 2) #10 (and were formally named as such in "" #2). This group is a squad of students in Xavier's school under the White Queen's leadership. Membership consists of:

* - Squad advisor, telepath, and Xavier Institute .
* (Julian Keller) - Squad leader and telekinetic.
*Mercury (Cessily Kincaid) - Solid humanoid mercury form and can turn into and move around as liquid mercury.
*Rockslide (Santo Vaccarro) - Durable granite outer layer; uses body parts as re-attachable projectiles.
*Tag (Brian Cruz) - Places a psionic broadcast on a person that repels or compels those around him toward or away from the signal; depowered and killed after group disbandment.
*Dust (Sooraya Qadir) - Changes her entire body into sand which reacts to allow her to move around in blasts and then return the sand back into her original form.
*Wither (Kevin Ford) - Rapidly deteriorates organic matter with his body upon direct contact. Formerly a New Mutant, Wither switched to the Hellions team due to a dislike of Dani Moonstar, a hatred for Elixir, and a betrayal by his fellow .

Former members:
*Icarus (Jay Guthrie), now deceased, was previously a member of this group of Hellions.
*Specter (Dallas Gibson) was part of the initial lineup (which didn't include Dust or Icarus), but wasn't in the final, formal, team. He can blend with his own shadow, which gives him darkness powers. He can't stay in shadow form for too long or he succumbs to his own darkness. The shadow form is stronger during the day.
*Anole (Victor Borkowski), like Specter, never formally joined the Hellions Training Squad, but was mentored by Emma Frost until he ultimately changed advisors from Frost to Northstar.

During 's reality warp in the "" storyline, , Hellion, Synch, Surge, Quill, and were members of 's Hellion Squad, led by .

As a result of the Decimation event, in which the depowered most of the mutant population, of the 182 students enrolled at the Xavier Institute for Higher Learning, only 27 still retain their powers. Most of the 'ex-mutants' have left the school, and all the remaining mutants have merged into one squad. While most of the New Mutants were affected, only Tag of the Hellions was; the other Hellions retained their powers. After injuring a student Wither ran away from the institute. He is currently homeless and has been found by Selene, who was in the disguise of an elderly woman.

The only surviving members of the original Hellions were (now called Warpath), , Empath, Magma, and Tarot (who died but was later resurrected through unknown means).

*Tarot later joined the third incarnation of the Hellions formed by King Bedlam. Her resurrection was never fully explained.

*Firestar later went on to join the and the Avengers. Due to the impending Civil War, she has decided to quit her superhero career.

*Magma continued her career with the and later resurfaced as a member of King Bedlam's Hellions. Her reasons for joining were purely selfish as Bedlam had promised her a large sum of money for her services. However, Magma helped out her old teammates from to save the day. She had a short tenure, along with Empath at the Los Angeles branch of , but was captured by the Church of Humanity and crucified on the front lawn of the . Her life was saved due to Archangel's healing blood and became a resident staff member for the growing student body at Xavier's mansion. After the events of M-Day, Magma went to live on the grounds of the X-Mansion with many other mutants. She found a friend in Outlaw, but some of the other mutants, quite a few of them being former villains, had trouble with her preferential treatment by the staff. She is currently a member of the new , but will reportedly be part of the new roster of X-Men in July 2008.

*Thunderbird joined with Cable when he formed X-Force and was a steady member for many years until the team disagreed with his leadership and walked out on him. They found a new leader in and he taught Warpath—then going simply by his last name Proudstar—how to further his abilities to include self-propelled flight. When X-force staged their own deaths, Proudstar later resurfaced as a member of the (Bombay) branch of X-Corporation. He recently rejoined the X-Men at Professor Xavier's behest and is now on the current roster of .

The original Hellions, appear briefly in the universe as former agents of Apocalypse. After his death, they became renegades and were hunted down and captured by the X-Men for the United States government. Their fates after being remanded into government custody is unknown.