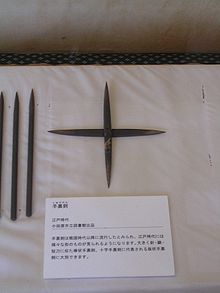 A shuriken (Japanese 手裏剣; literally: "sword hidden in the hand") is a traditional Japanese concealed weapon that was generally used for throwing, and sometimes stabbing or slashing. They are sharpened hand-held blades made from a variety of everyday items such as needles, nails, and knives, as well as coins, washers, and other flat plates of metal.

Shuriken are commonly known in the West as "throwing stars", "ninja stars" or inaccurately as "Chinese stars", though they took many different shapes and designs during the time they were used. The major varieties of shuriken are the bō shuriken (棒手裏剣, stick shuriken) and the hira shuriken (平手裏剣, flat shuriken) or shaken (車剣, also read as kurumaken, wheel shuriken).

Shuriken were mainly a supplemental weapon to the more commonly used sword or other various weapons in a samurai warrior's arsenal, though they often played a pivotal tactical role in battle.[1] The art of wielding the shuriken is known as shurikenjutsu, and was mainly taught as a minor part of the martial arts curriculum of many famous schools, such as Yagyū Shinkage-ryū, Tenshin Shōden Katori Shintō-ryū, Ittō-ryū, Kukishin-ryū and Togakure-ryū. 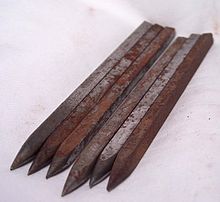 Bo-shuriken are throwing weapons consisting of a straight, iron or steel spike, usually four-sided but sometimes round or octagonal in shape. They are usually single-pointed, but some have points on both sides. The length of bo-shuriken ranges from 12 to 21 cm (5–81⁄2 in) and the average weight was from 35 to 150 grams (1.2–5.4 ounces).[2]

The bo-shuriken is thrown in a number of ways, such as overhead, underarm, sideways and rearwards, but in each case, the throw involved the blade sliding out of the hand through the fingers in a smooth, controlled flight. This is not to be confused with the kunai, which is a thrusting and stabbing implement that is sometimes thrown.

Bo-shuriken were constructed from a wide variety of everyday items, and thus there are many shapes and sizes. Some derive their name from the materials they were fashioned from, such as kugi-gata (nail form), hari-gata (needle form) and tantō-gata (knife form); others are named after the object to which they appear similar, such as hoko-gata (spear form), matsuba-gata (pine-needle form) while others were simply named after the object that was thrown, such as kankyuto (piercing tool form), kunai-gata (utility tool form), or teppan (plate metal) and biao (pin).[2]

Other items were also thrown as in the fashion of bo-shuriken, such as kogai (ornamental hairpin), kogata (utility knife) and hashi (chopsticks), although these items were not associated with any particular school of shurikenjutsu, rather they were more likely just thrown at opportune moments by a skilled practitioner who was skilled in a particular method or school.

The origins of the bo-shuriken in Japan are still unclear despite continuing research in this area. This is partly because shurikenjutsu is a secretive art, and also to the fact that throughout early Japanese history there were actually many independent innovators of the skill of throwing long, thin objects. The earliest known mention of a school teaching shurikenjutsu is Ganritsu Ryu, prevalent during the 17th century. This school utilized a long thin implement with a bulbous head, thought to be derived from the arrow. Existing examples of blades used by this school appear to exhibit a mixture of an arrow's shape with that of a needle traditionally used in Japanese leatherwork and armor manufacture.[2]

There are also earlier mentions in written records, such as the Osaka Gunki (大阪軍記, the military records of Osaka), of the standard knife and short sword being thrown in battle, and Miyamoto Musashi is said to have won a duel by throwing his short sword at his opponent, killing him. 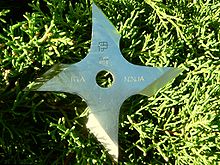 Hira-shuriken are constructed from thin, flat plates of metal derived from a variety of sources including hishi-gane (coins), kugi-nuki (carpentry tools), spools, and senban (nail removers), and generally resemble popular conceptions of shuriken.

They often have a hole in the center and possess a fairly thin blade sharpened only at the tip. The holes derive from their source in items that had holes – old coins, washers, and nail-removing tools. This proved convenient for the shuriken user, as well, as the weapons could be strung on a string or dowel in the belt for transport, and the hole also had aerodynamic and weighting effects that aided the flight of the blade after it was thrown.[2]

There is a wide variety of forms of hira-shuriken and they are now usually identified by the number of points the blades possess. As with bo-shuriken, the various shapes of hira-shuriken were usually representative of a particular school (ryū) or region that preferred the use of such shapes, and it is therefore possible to identify the school by the type of blade used.[2]

Contrary to popular belief, shuriken were not primarily intended as a killing weapon, but rather as a secondary weapon that sometimes played a role supportive to a main weapon, usually the sword or spear.[3] Shuriken were primarily used to cause either nuisance or distraction. Targets were primarily the eyes, face, hands, or the feet, the areas most exposed under armor. The shuriken would sometimes be thrown in a way that cuts the opponent and become lost, later causing the opponent to believe that they were cut by an invisible swordsman.[1]

Shuriken, especially hira-shuriken, were also used in other novel ways—they might be embedded in the ground, injuring those who stepped on them (similar to a caltrop or tetsubishi), wrapped in fuse to be lit and thrown to cause fire, or wrapped in a cloth soaked in poison and lit to cover an area with a cloud of poisonous smoke.[4] They can also be used as a handheld striking weapon in close combat.[5]

There are reports of shuriken being coated with poison intended either for a throwing target or for whoever may pick them up when left in a conspicuous place.[6] Other reports indicate that shuriken may have been buried in dirt or animal feces and allowed to harbor the bacterium Clostridium tetani—if the point penetrated a victim deeply enough, the bacteria transferred into the wound could cause a then-incurable tetanus infection.

Shuriken are a simple weapon, but their historical value, thanks to their wide variety of uses and the ready availability of material from which they could be made, has increased. Unlike the treasured katana and other bladed weapons, antique shuriken are not often well preserved, largely due to their original status as expendable weapons.[7]

Japanese shuriken or sword hidden in the hand, these could be senbon or bo shuriken

Modern shuriken, unlike historical ones, are most often made of stainless steel and are commercially available in many knife shops in Europe and North America or online. They are however illegal to possess or carry in some countries (e.g. Canada,[8] Germany[9]) while in some countries such as the United States, some regions prohibit them (e.g., California,[10] Indiana[11]), while others allow them. In some cases they may also be allowed, but still subject to specific local legislation. Owners may be required to possess a certificate for the possession of knives.

Popularly believed to have been used by Japanese ninja, shuriken are most common in the popular culture in the form of metallic four-pointed hira shuriken. A fictional enlarged version of shuriken is called fūma shuriken.

The shuriken can be seen in a wide range of modern media set in historical, modern and even futuristic settings. While shuriken are almost always associated with ninja and to a lesser extent other thieves and assassins, they are sometimes seen as wholly separate from that context.