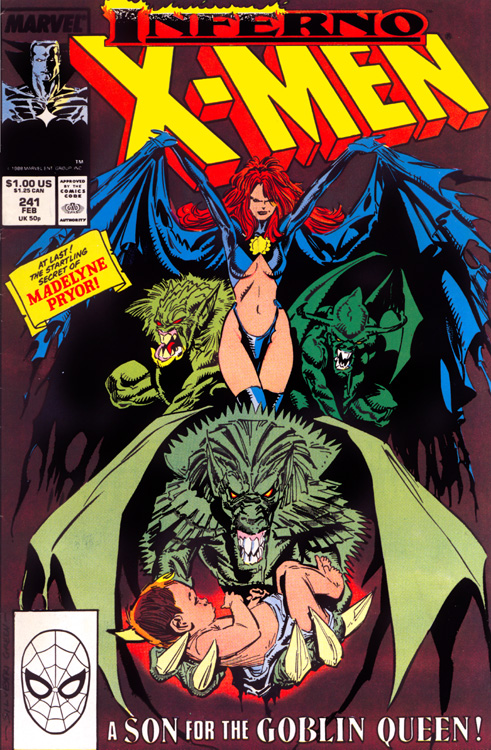 Cover_to_" #241. Art by thumb|200px"Inferno" was the name of a company-wide crossover that mainly involved the titles in .

's clone, was taken in by the demons and . They planned for a demonic invasion of Earth, beginning with . Illyana Rasputin of the began to mutate into a demon and N'astirh tricked her into opening a gateway. The city of Manhattan fell under siege, and the Avengers, , Daredevil, , and had to fight numerous demons, most importantly Hobgoblin, now possessed by a demon that did not disappear with the others when the crisis was over, and the mutant-hating Boogeyman, transformed into a monster by N'astirh. Even objects became demonically tainted and people's souls became twisted. Havok, , Wolverine, , Archangel, and Storm all fell to the darkness to some extent. Colossus was one of the few who remained wholly immune to the effects of Inferno, due to the protection of his organic steel armor, which is a naturally disruptive force against magic. Some civilians weren't so lucky; some were maimed, others were simply killed and/or devoured.

As shown in "Daredevil", life tried to continue as normal in the city. Buses still ran, under an all-volunteer force since the drivers had been eaten. Subways functioned, though Daredevil had to save one from being sucked into the depths of Hell. Stores still sold products. Helicopter tours ran.

Other parts of the city did not function as well. "The Daily Bugle" was under siege, though fortunately for the untrained civilians and an injured Spider-Man inside, the demons shattered under one blow. Demons attack , and puts on his trappings to defend it.

The New Mutants finally convinced Illyana to give up her powers and seal the gate. This eradicated most of the demons, but Madelyne Pryor and her servants remained, and many parts of the city remained demonically transmogrified. Jean Grey battled her clone. Weary, Madelyne forcibly linked herself to Jean's mind and willed herself to die, attempting to take Jean with her. However, the fragment of the Phoenix Force that first gave Madelyne life emerged and Jean absorbed the fragment into herself, breaking Madelyne's mental hold on her. New York then returned to normal. The X-Men then went after Madelyne's creator, , who was responsible for the manipulations which led to Madelyne's creation. Cyclops blasted Sinister to bits, though he inexplicably returned later, as did Madelyne Pryor.

Despite all of the destruction and death, many human Inferno survivors were convinced it was all a shared hallucination.

Chronologically, this is roughly the order they occur:

The chronology is imperfect because of the many different points of view (of the same events) presented, so an exact chronology would break individual issues into parts. However, it is more accurate than the chronology given in "Wizard" in 1992, particularly when it comes to N'Astirh's physical change and the placement of "Power Pack" #44, which is stated in the issue to occur after "Cloak and Dagger" #4, but was published a month earlier, and thus appears earlier in "Wizard"'s chronology. When collected into a trade paperback, only the portions from "The Uncanny X-Men", "X-Factor", and "The New Mutants" were included, and the latter story line was presented separately from the first two. Starting with "Excalibur" #6, the story moves into aftermath phase, and most of the subsequent issues show the demons leaving New York.

Part of the story has been collected into a trade paperback: