The New York State Capitol is the capitol building of the U.S. state of New York. Housing the New York State Legislature, it is located in the state capital city Albany, on State Street in Capitol Park. The building, completed in 1899 at a cost of $25 million (worth approximately half a billion current dollars), was the most expensive government building of its time. It was declared a National Historic Landmark in 1979.[2][3]

The current building is the third capitol building. A small building, the Van Gaasbeek house, was used briefly at Kingston, New York.[4] From August 22 to 25, 1777, the Van Schaick House at Cohoes was used by Governor George Clinton as the New York State Capitol.[5] After the Revolution, a second building was erected on land just in front of the current building. 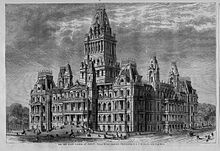 Interim plan for the Capitol by Thomas Fuller

The present Capitol was constructed between 1867 and 1899. Three teams of architects worked on the design of the Capitol during the 32 years of its construction. They were managed by: 1867-75: Thomas Fuller, 1875-83: Leopold Eidlitz and Henry Hobson Richardson, 1883-99: Isaac G. Perry. Fuller, the initial architect, was an Englishman who also designed the Canadian Parliament buildings in Ottawa.

The ground floor of the state capitol was built in the Classical/Romanesque style. Lieutenant Governor William Dorsheimer then dismissed Fuller in favor of Eidlitz and Richardson.[6], who built the next two floors in a Renaissance Classical style, noticeable on the exterior two floors as light, open columnwork. The increasing construction costs became an ongoing source of conflict in the legislature, and it was difficult to secure the funding necessary. Eidlitz and Richardson, were dismissed by Grover Cleveland upon his election to governorship and his review of the increasing costs of construction. He hired Perry to complete the project.[6] The legislative chambers, the fourth floor and roof work were all finished in Victorian-modified Romanesque that was distinctively Richardson's design. It "was Richardson who dominated the final outcome of the grand building, which evolved into his distinguished Romanesque style" (which came to be known as Richardsonian Romanesque).[6] It is claimed that Richardson was imitating the Hôtel de Ville (City Hall) in Paris, France.

The central open court is dominated by a shaft intended to support a massive dome. The dome and tower were never completed, as it was found that the weight of the building was already causing stress fractures and actually to make the build shift downhill toward State Street. To stop this movement, a very large, 166-foot (51 m) long exterior Eastern Staircase was added to support the front facade. The Capitol exterior is made of white granite from Hallowell, Maine, and the building incorporates marble cut by state prisoners at Sing Sing. The granite structure is 220 feet (67 m) tall at its highest point, and it is one of ten U.S. state capitols that does not have a domed roof. Underground tunnels connect it to the Empire State Plaza and Alfred E. Smith Building. The building's exterior is currently undergoing restoration.[7]

The Assembly Chamber was built originally with the largest open arched span in the world. However, this produced very inconvenient acoustic results. A more serious problem was that the shifting foundations of the whole structure made the vaults unstable. A lower false ceiling was introduced to prevent rock shards from the vaults from falling to the assembly floor.[8]

The Capitol initially featured two large murals by Boston artist William Morris Hunt painted directly onto the sandstone walls of the Assembly Chamber. The two enormous works, named The Flight of Night and The Discoverer, each some 45-feet long, were later covered when the Assembly's vaulted ceiling proved unstable and the ceiling was lowered four feet below the murals. Earlier, the murals had been damaged by moisture in the building and had begun to flake. Plans for later murals by Hunt were abandoned due to lack of funding, and some people have speculated the artist's suicide might have resulted from his resulting depression.[9][10][11]

There have been reports that the building is haunted, to the point that a local historian offers a special Hauntings Tour. The best-known ghost is alleged to be that of Samuel Abbott, a night watchman who died during a severe fire in 1911, a fire that also destroyed half a million books while sparing sacred Iroquois artifacts. A ghost haunting the Assembly chamber, supposedly producing cold spots and occasional flickering lights, is believed to be William Morris Hunt, angry over his work being concealed. Another one is said to be a local fruit vendor, despondent over his business, who committed suicide in 1890 by jumping off the staircase to the Senate chamber on the fourth floor.[12]