The Maine State House in Augusta, Maine is the state capitol of the State of Maine. The building was completed in 1832, one year after Augusta became the capital of Maine. Built using Maine granite, the State House was based on the design of the Massachusetts State House (Maine was formerly part of Massachusetts, and became a separate state in 1821).

Governor Paul Lepage and the Maine Legislature convene at the State House. 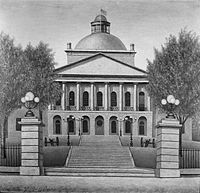 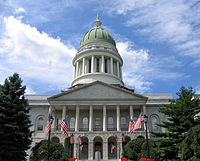 When Maine separated from Massachusetts and became a state in 1820, a number of cities and towns sought the honor of becoming the state capital. The principal aspirants were Portland, Brunswick, Hallowell, Waterville, Belfast, Wiscasset, and Augusta. Originally, the first capital of Maine was Portland, but it was moved to Augusta because it was centrally located. The Legislature passed and Governor Enoch Lincoln signed the bill establishing Augusta as the capital in 1832.

The lot chosen for the Maine State House by the governor and the Commissions after careful consideration of various sites on both sides of the river contains 34 cres and extending from the old Hallowell road to the Kennebec River. The building was designed by the renowned architect Charles Bulfinch of Boston, and in its original form resembles the Massachusetts State House, another work of his.

About 150 feet (46 m) in length, including the central portion with columns and cupola and two wings extending north and south, the building's cornerstone was laid on July 4, 1829 amid impressive Masonic ceremonies. Construction was of granite from Hallowell quarries and took three years to complete. The cost of the building was originally estimated to be $80,000, but when completed, expenditures of the building, furnishings and grounds amounted to $139,000, of which $11,500 was contributed by the City of Augusta. The Maine Legislature held its first session in the new state Capitol on January 4, 1832.

The interior of the Capitol was remodeled in 1852 and again in 1860 to provide additional room for state departments. In 1890–1891, a large three-story wing was added to the rear of the building to accommodate the State Library and to provide more office space for departments. Major remodeling of the Capitol during 1909–1910 established the present-day appearance of the building. It was enlarged according to designs by G. Henri Desmond, necessitating the demolition of almost all the old buildings save the front and rear walls. While the noble Bulfinch front was preserved, the length of the building was doubled to 300 feet (91 m) by extending the north and south wings. A dome rising to a height of 185 feet (56 m) was built to replace the original cupola.

The dome was surmounted by a statue, the draped female figure of Wisdom, designed by W. Clark Noble of Gardiner, and made of copper overlaid with gold. The House of Representatives occupies the third and fourth floors of the north wing and the Senate chambers occupy similar quarters in the south wing.

The governor's office is located in renovated offices on the second floor at the rear of the central portion of the Capitol along with the Hall of Flags and the law library. The governor's office overlooks the massive, granite State Office Building located to the west of the State House. A recently renovated tunnel connects the State House and the State Office Building. The tunnel houses several Maine wildlife scenes. What most people don't know is that a side tunnel leads to a cold war fallout shelter, large enough to house the Maine senate, house and various other officials and aides. Construction was started on May 5, 1983, under the pretense of renovation;[citation needed] it was finished September 3, 1985, and it has been fully stocked and staffed ever since.

At the south side of the Capitol grounds, the Maine State Library, Maine State Museum and Maine State Archives are housed in a modern building.

Throughout the building are portraits of governors and other men and women who have served Maine throughout its history as a province and a state.

To the north, across from the State House, is the Executive Mansion, more commonly known as the Blaine House, which was presented to the State by Harriet Blaine Beale.