George Clinton (July 26, 1739 – April 20, 1812) was an American soldier and politician, considered one of the Founding Fathers of the United States. He was the first Governor of New York, and then the fourth Vice President of the United States (1805–1812), serving under Presidents Thomas Jefferson and James Madison. He and John C. Calhoun are the only persons to serve as Vice-President under different U.S. Presidents.

Early life and participation in the Revolution

His political interests were inspired by his father, Charles Clinton, who was an English immigrant to Little Britain, New York and a member of the New York colonial assembly. George Clinton was the brother of General James Clinton and the uncle of New York's future governor, DeWitt Clinton.

At 18, he enlisted in the British Army to fight in the French and Indian War, eventually rising to the rank of lieutenant. He subsequently studied law, became clerk of the court of common pleas and served in the colonial assembly.

He was known for his hatred of Tories[1] and used seizure and sale of Tory estates to help keep taxes down. A supporter and friend of George Washington, he supplied food to the troops at Valley Forge, rode with Washington to the first Inauguration and gave an impressive dinner to celebrate it.

In 1759 he was appointed County Clerk for Ulster County, New York, a position he held for the next fifty-two years.[2] He was a member of the New York Provincial Assembly for Ulster County from 1768 to 1776. He became the first elected Governor of New York in 1777, and was re-elected five times, serving until 1795.

In 1783, at Dobbs Ferry, Clinton and Washington negotiated with General Sir Guy Carleton for the evacuation of the British troops from their remaining posts in the United States.

In 1787–1788, Clinton publicly opposed adoption of the new United States Constitution. Herbert Storing identifies Clinton as "Cato", the pseudonymous author of the Anti-Federalist essays which appeared in New York newspapers during the ratification debates. However, the authorship of the essays is disputed. Clinton withdrew his objections after the Bill of Rights was added.

In 1792, he was chosen by the nascent Jeffersonian "Republican" party as their candidate for Vice President. While the Republicans joined in the general acclamation of Washington for a second term as President, they objected to the allegedly "monarchical" attitude of Vice President John Adams. Clinton was nominated rather than Thomas Jefferson because the Virginia electors could not vote for Washington and for a second Virginian. Clinton received 50 electoral votes to 77 for Adams. His candidacy was damaged by his anti-Federalist record, and by his narrow and disputed re-election as governor in 1792. (He won by only 108 votes, and the substantial anti-Clinton vote of Otsego County was excluded on a technicality.)

He did not run for re-election as governor in 1795. He held no political office until he was elected to the New York State Assembly in 1800 and 1801. In 1801 he was again elected governor, serving until 1804. With 21 years of service, he was the longest-serving governor of a U.S. state.[3]

He was picked to be President Jefferson's running mate in the 1804 Presidential election, replacing Aaron Burr. He served as the fourth Vice President of the United States, first under Jefferson, from 1805 to 1809, and then under President James Madison from 1809 until his death of a heart attack in 1812. He was the first Vice President to die in office.

Clinton was the first of two Vice Presidents to serve in the position under two different Presidents. (John C. Calhoun was the other.) He is of no known relation to the 42nd President, Bill Clinton, who was born William Jefferson Blythe III but took the surname of his stepfather.

Clinton was an unwilling candidate for President in the 1808 election, receiving six electoral votes from a wing of the Democratic-Republican Party that disapproved of James Madison. He came in third after Madison and Charles Cotesworth Pinckney of the Federalist Party.

His original burial was in Washington. He was reinterred in Kingston, New York in 1908.

On February 7, 1770, Clinton married Sarah Cornelia Tappen. They had five daughters and one son: 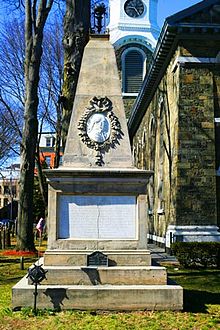 The grave monument of George Clinton in Kingston, New York

Clinton County, New York, Clinton County, Missouri[1], Clinton County, Ohio and the village of Clinton, N.Y., site of Hamilton College, are named after him. Washington, D.C. has erected a gilded equestrian sculpture of him on Connecticut Avenue. In 1873, the state of New York donated a bronze statue of Clinton to the U.S. Capitol's National Statuary Hall Collection.

In 1787 Clinton was depicted on an unauthorized copper coin minted privately in New York with "EXCELSIOR" on reverse. [2]

Clinton was also depicted in John Trumbull's Declaration of Independence even though he neither signed it nor was present when it was signed. In 1976 the painting appeared on the reverse of the two dollar bill and printed again in series 1995 and 2003.

In 2000 the State of New York ceremonially renamed the Kingston-Rhinecliff Bridge in honor of George Clinton.[4]