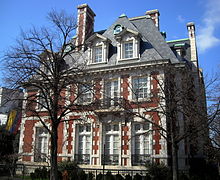 According to the National Park Service, the first instance of law dealing with contributing properties in local historic districts occurred in 1931 when the city of Charleston, South Carolina, enacted an ordinance which designated the "Old and Historic District."[1] The ordinance declared that buildings in the district could not have changes made to their architectural features visible from the street. By the mid 1930s, other U.S. cities followed Charleston's lead. An amendment to the Louisiana Constitution led to the creation of the Vieux Carre Commission in 1937.[1] The commission was charged with protecting and preserving the French Quarter in the city of New Orleans. The city then passed a local ordinance which set standards regulating changes within the quarter.[1] Other sources, such as the Columbia Law Review in 1963, indicate differing dates for the preservation ordinances in both Charleston and New Orleans. The Columbia Law Review gave dates of 1925 for the New Orleans laws and 1924 for Charleston.[2] The same publication claimed that these two cities were the only cities with historic district zoning until Alexandria, Virginia adopted an ordinance in 1946.[2] The National Park Service appears to refute this.[1]

In 1939, the city of San Antonio, Texas, enacted an ordinance which protected the area of La Villita, which was the city's original Mexican village marketplace.[1] In 1941 the authority of local design controls on buildings within historic districts was being challenged in court.[3] In City of New Orleans vs Pergament (198 La. 852, 5 So. 2d 129 (1941)) Louisiana state appellate courts ruled that the design and demolition controls were valid within defined historic districts. Beginning in the mid 1950s controls which once applied to only historic districts were extended to individual landmark structures.[3] The United States Congress adopted legislation which declared the Georgetown neighborhood in Washington, D.C. protected in 1950.[1] By 1965 51 American communities had adopted preservation ordinances. Thirty three years later, in 1998, more than 2,300 U.S. towns, cities and villages had enacted historic preservation ordinances.[1] 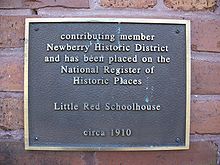 A building within a historic district that contributes to the historic character of the district. See Building property type of NRHP listing.

An object within a historic district that contributes to the historic character of the district. See Object property type of NRHP listing.

A structure within a historic district that contributes to the historic character of the district.See Structure property type of NRHP listing.

A site within a historic district that contributes to the historic character of the district. See Site property type of NRHP listing. 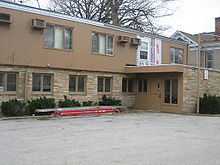 This medical clinic building in the East Grove Street Historic District in Bloomington, Illinois is an example of a non-contributing property.

Historic buildings identified as contributing properties can become non-contributing properties within historic districts if major alterations have taken place. Sometimes, an act as simple as re-siding a historic home can damage its historic integrity and render it non-contributing. In some cases, damage to the historic integrity of a structure is reversible, while other times the historic nature of a building has been so "severely compromised" as to be irreversible.[11]