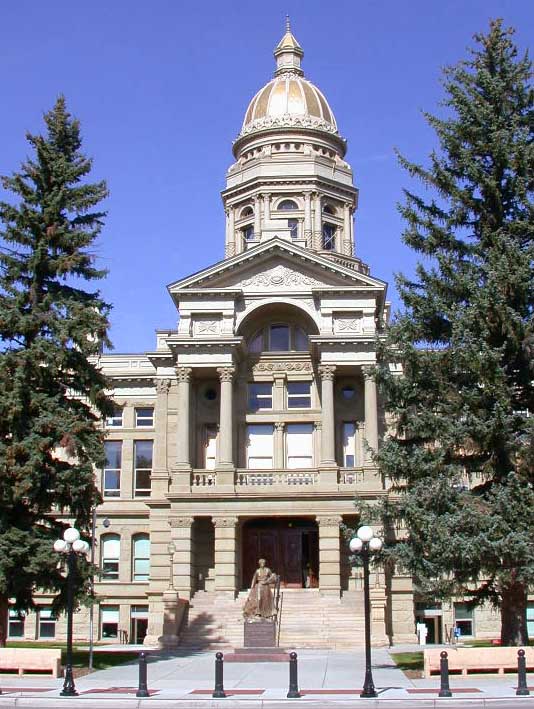 The Wyoming State Capitol is the state capitol and seat of government of the of . Built between 1886 and 1890, the capitol is located in Cheyenne and contains the chambers of the and well as the office of the . It was designated a U.S. in 1987.

The construction of the capitol was authorized in in 1886 by the Ninth Territorial Legislature Assembly, which specified that the cost should not exceed 150,000. Governor appointed a five-member commission to select and purchase a site in Cheyenne, as well as to select an architect and solicit for construction. The commission selected the architectural firm of David W. Gibbs & Company, which submitted plans and specification, which were accepted in July 1886. The construction contract was awarded to Adam Freick & Brothers, which submitted the lowest bid at $136,275.12. Construction began on , 1886. The cornerstone was laid on , . The original cornerstone contained maps and a roster of territorial officers. During the celebration of the capitol in 1987, the cornerstone was removed, the original documents were replaced, and the cornerstone was reset.

In 1974 the 42nd State Legislature authorized funds for the first phase of a renovation of the building. The renovation was completed in 1980 at a total cost of $7.6 million. It included stripping and staining all woodwork, painting walls in the original design, replacing wooden floor beams with steel and concrete, as well as modernizing the wiring, heating, plumbing, and air conditioning.

The building was designated a in 1987.

The capitol is located north of downtown . It is Corinthian in style with a central dome and portico reminiscent of the . It has three stories above ground, and one floor below ground. The first two courses of the building are made of quarried near . The remainder is sandstone from near . The central is covered with 24 carat (100%) and has been gilded six times, between 1900 and 1988. It stands 146 ft (43 m) high and 50 ft (15 m) wide at its base, and is visible from roads entering the city.

The interior of the building features a ground-floor rotunda from which the interior of the central dome is directly visible overhead. The dome interior features blue and green from . Since normal sunlight cannot penetrate the glass, electrical lights were installed within the dome to illuminate the glass from behind. The officers of four of Wyoming's five elected officials&mdash; Governor, Secretary of State, Auditor, and Treasurer&mdash; have their officers on the ground floor surrounding the rotunda.

The wood in the rotunda is . The rotunda also features a prominent statue of Chief Washakie of the . The wings of the ground floor contain several large specimens, including a mounted which was raised with the state herd in near Thermopolis. The bison weighed approximately 3,000 lb (1350 kg) while living, and is the third largest bison recorded in the Boone and Crocket Book of Records.

The Senate chamber is the west wing of the second floor building; the House chamber is in the east wing of the second floor. Each chamber contains four large s by Allen True, who painted them in August 1917 for a cost of $500 each. The murals depicting various aspects of the culture, history, and industry of Wyoming. The murals in the Senate chamber are entitled "Indian Chief ", "Frontier Cavalry Officer", " Rider", and "Railroad Builders/Surveyors". The House murals are entitled "Cattlemen", "Trappers", "Homesteaders", and "Stagecoach". The ceilings of both chambers are inlaid with Tiffany-style stained glass, with the displayed in the center. Both chambers are accessible to visitors by balconies on the third floor. The House chamber also includes two oil paintings by William Gollings. The wood in both chambers is .

The exterior approach to the front steps of the capitol features a prominent statue of , who played a significant role in gaining women's in the Wyoming Territory. The statue is by sculptor . The Act to grant women the right to vote was passed by the First Territorial Assembly and signed by Governor on , . Wyoming thus claims to be the first government in the world to grant women the right to vote. Morris was also appointed as the first female in the territory in 1870. A replica of the Morris statue stands in the in the U.S. Capitol.

The capitol is open to the public during business hours during the week. The front desk in the rotunda provides informational pamphlets. Tours also are available. Wyoming's Capitol is unusual in that it is highly accessible by the public at all times of the year, including during the Legislative session.