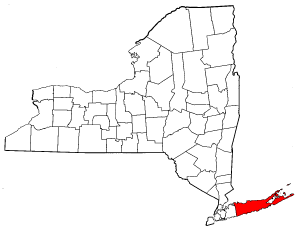 Suffolk County is a county located in the of . As of the 2000 census, the population was 1,419,369. It was named for the county of Suffolk in , from which its earliest settlers came. The is Riverhead, though many county offices are in Hauppauge on the west side of the county where most of the population lives. There are also offices in Smithtown, for the legislature, Yaphank, and Farmingville.

Suffolk and Nassau counties together are generally referred to as "" by area residents &mdash; as distinct from the boroughs of (Queens County) and (Kings County), which geographically make up the island's western end.

Suffolk County is the easternmost county in New York State and the .

Suffolk County was an original county of New York State, one of twelve created in 1683. Its boundaries were substantially the same as at present, with only minor changes in the boundary with its western neighbor, which was originally Queens County but since 1899 has been Nassau County. However, as eastern Suffolk County has become more suburbanized there have been efforts to split the east end of the county off into a new county, called Peconic County.

Suffolk County occupies the easternmost portion of , in the southeastern portion of State. The eastern end of the county splits into two s, known as the North Fork and the South Fork. The county is surrounded by water on three sides, including the and the . The eastern end contains large s. Suffolk County is divided into 10 towns: Babylon, Brookhaven, East Hampton, Huntington, Islip, Riverhead, Shelter Island, Smithtown, Southampton, and Southold. Also part of the county, but not considered parts of the above towns, are the Poospatuck and Shinnecock s. Poospatuck is d within Brookhaven in the Mastic CDP, and Shinnecock is enclaved within Southampton, adjacent to Southampton village, Tuckahoe, and Shinnecock Hills.

Major facilities include in Upton and on Plum Island. Several airports serve commuters and business travelers, most notably in Islip, in East Farmingdale and in Westhampton Beach.

Suffolk County has long been a Republican bastion in . U.S. Congressman , who opposed in the 2000 Senate race, was from Suffolk County. However, recent elections have turned the county more toward the Democrats. In 2003, Democrat Steve Levy was elected county executive, ending longtime Republican control. In 2001, Democrat Thomas Spota was elected District Attorney, and ran unopposed in 2005. Although Suffolk voters gave a victory here in 1992, the county voted for in 1996 and continued the trend by giving a large victory here in 2000 and a smaller margin of victory in 2004.

Democratic voters in Suffolk, as well as neighboring Nassau County have helped to turn Downstate into a solidly Democratic region.

Republicans controlled the county legislature until a landmark election in November 2005 where three Republican seats switched to the Democrats, giving them control. William Lindsay is the current Presiding Officer of the legislature while Jon Cooper is the majority leader.

In November 2007, the Democratic Party once again retained control over the Suffolk County Legislature picking up one seat in the process.

Police services in the five western towns (Babylon, Huntington, Islip, Smithtown and Brookhaven) are provided primarily by the . The five "East End" towns (Riverhead, Southold, Shelter Island, East Hampton, and Southampton), maintain their own police forces. Also, there are a number of villages, such as Amityville, Lloyd Harbor, Northport and Westhampton Beach, that maintain their own police forces.

In an unusual move, the Village of Greenport in 1994 voted to abolish its police department and turn responsibility for law and order over to the Southold Town Police Department.

After the was disbanded in 1980, all state parkways in Suffolk County became the responsibility of Troop L of the , headquartered at . State parks, such as Robert Moses State Park, are the responsibility of the , based at . In 1996, the Police Department was consolidated into the , which has jurisdiction over all rail lines in the county.

The Suffolk County Sheriff's Office is a separate agency. With over three hundred years of tradition, the Sheriff's Office has been an integral part of Suffolk County's history. The Sheriff's Office is headed by the Sheriff, an elected position that serves a four year term. The Sheriff is the highest law enforcement official in the county. The Sheriff's Office operates the two Suffolk County correctional facilities (in Yaphank and Riverhead), provides county courthouse security and detention, service and enforcement of civil papers, evictions and warrants. There is also a full-service patrol unit that primarily assists the East End town and village police forces, although can be assigned anywhere in the county and can respond to 911 calls and make arrests anywhere in Suffolk County. In addition, the Sheriff's Office has several specialized units including K-9 Units, Marine Units, a Dive Team, a Traffic Enforcement Unit (including a Motorcycle Section) which covers all roadways in Suffolk County though is primarily concerned with the East End, and the , a Mountain Bike Unit, an ATV Unit, a SWAT unit called the Sheriff's Emergency Response Team (SERT) which includes a tactical weapons team and a sniper section. Suffolk County Deputy Sheriff Investigators participate in various task forces (such as the East End Drug Task Force, and the specially created joint task force with the US to investigate and arrest illegal immigrant gang members, the DEA, HIDTA and the U.S. Marshals Service), undercover assignments, and also conduct criminal investigations. Suffolk County Deputy Sheriffs are also responsible for patrolling and investigating all crimes committed on county-owned property such as county government office buildings and the campuses of the , as well as providing assistance to the . As of 2008, the Suffolk County Sheriff's Office employs 275 Deputy Sheriffs, 850 Correction Officers and about 200 civilian staff.

Suffolk County has a special court system, somewhat similar to Nassau County, and very different from the rest of the state. Like Nassau, there is a District Court, but only for about half the county. For about half of the county, most traffic tickets are handled by the Traffic Violations Bureau of Suffolk County. TVB is an arm of the Department of Motor Vehicles, and is not part of the state court system. There are TVBs in New York City, Rochester and Buffalo as well. Suffolk County also has village courts and five town courts.

In New York State, a town is the major subdivision of each . Towns provide or arrange for most municipal services for residents of hamlets and selected services for residents of villages. All residents of New York who do not live in a or on an live in a town. A is an which is usually, but not always, within a single town. A village is a clearly defined that provides the services closest to the residents, such as garbage collection, street and highway maintenance, street lighting and building codes. Some villages provide their own police and other optional services. A hamlet is a populated area within a town that is not part of a village. The term "hamlet" is not defined under New York law (unlike cities, towns and villages), but is often used in the state's statutes to refer to well-known populated sections of towns that are not incorporated as villages. For more information, see the article "".