"Five Boroughs" redirects here. For the Mercian area of this name during the tenth and eleventh centuries, see Five Boroughs of the Danelaw.

New York City, one of the largest cities in the world, is composed of five boroughs. Each borough now has the same boundaries as the county it is in. County governments were dissolved when the city consolidated in 1898, along with all city, town, and village governments within each county. A borough is a unique form of governmental administration for each of the five fundamental constituent parts of the consolidated city. Technically, under New York State Law, a "borough" is a municipal corporation that is created when a county is merged with populated areas within it.[citation needed] It differs significantly from other borough forms of government used in Connecticut, New Jersey, Pennsylvania, Alaska, other states, Greater London and elsewhere. 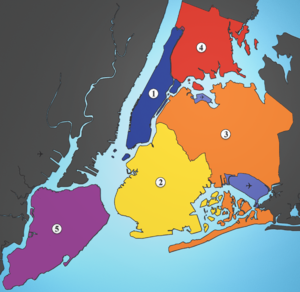 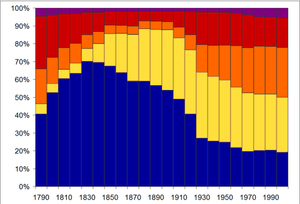 The percentage of New York City population residing in each borough (from bottom to top): 1. Manhattan, 2. Brooklyn, 3. Queens, 4. The Bronx and 5. Staten Island. (Populations before 1898 are for the areas now enclosed in the present boroughs.)

New York City is often referred to collectively as the Five Boroughs; the term is used to refer to New York City as a whole unambiguously, avoiding confusion with any particular borough or with the greater metropolitan area. It is often used by politicians to counter a focus on Manhattan and to place all five boroughs on equal footing. The term Outer Boroughs refers to all the boroughs excluding Manhattan (although the geographic center of the city is along the Brooklyn/Queens border).

Unlike most American cities, which lie within a single county, extend partially into another county, or constitute a county in themselves, each of New York City's five boroughs is coextensive with a county of New York state.

All boroughs were created in 1898 during consolidation, when the city's current boundaries were established. The Borough of Bronx was originally the parts of New York County that had been previously ceded by Westchester County, until Bronx County was created in 1914. The Borough of Queens originally consisted of just the western part of a larger Queens County, until Nassau County was created by the secession from Queens County of the three eastern towns in 1899. The Borough of Staten Island was officially the Borough of Richmond until the name was changed in 1975 to reflect its common appellation.

Each borough is represented by a Borough President and, with the exception of Manhattan, has a borough hall (the same functions, and others, reside in the Manhattan Municipal Building). Since the abolition of the Board of Estimate in 1990 (due to a 1989 ruling of the U.S. Supreme Court[4]) the borough president now has minimal executive powers, and there is no legislative function within a borough. Most executive power is exercised by the Mayor of New York City, and legislative functions are the responsibility of the members of the New York City Council. Because they are counties, each borough also elects a District Attorney, as does every other county of the state. Some civil court judges are also elected on a borough-wide basis, although they are generally eligible to serve throughout the city.