The Manhattan Municipal Building, at 1 Centre Street in New York City, is a 40-story building built to accommodate increased governmental space demands after the 1898 consolidation of the city's five boroughs. Construction began in 1907 and ended in 1914,[3][2] marking the end of the City Beautiful movement in New York. William M. Kendall[2] of the noted architectural firm McKim, Mead and White designed the building, which was the first to incorporate a New York City Subway station into its base. Enormously influential in the civic construction of other American cities, its application of Beaux-Arts architecture served as the prototype for the Terminal Tower in Cleveland, and the Wrigley Building in Chicago, in addition to the Seven Sisters of Stalin-era Soviet architecture.

Located at the intersection of Chambers Street and Centre Street, the Municipal Building, which stands 580 feet (177 m) tall, is one of the largest governmental buildings in the world. It houses thirteen municipal agencies of New York City, and until 2009, when the Manhattan Marriage Bureau moved to another city building at 80 Centre Street,[4][5] 18,000 people[6] were married in its second floor chapel each year. There are 25 floors of work space served by 33 elevators, with an additional 15 stories in the tower.

The building was designated a New York City landmark in 1966,[3] and was added to the National Register of Historic Places in 1972. 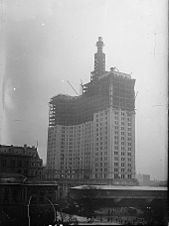 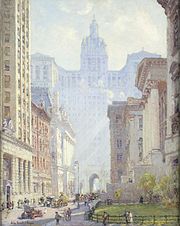 In the 1884 annual report of the City of New York, Mayor Franklin Edson declared that more space was badly needed for governmental functions. But he also noted that City Hall was not expandable because its "style of architecture was such that without marring its present symmetry, it couldn't be enlarged to the required extent."

The City's agencies rented space in various buildings strewn all the way from Downtown Manhattan up to Midtown Manhattan, with the number of such arrangements increasing by the year. The government, desiring to cut down the amount of rent paid to private landlords, held several design competitions for a new, massive building that would be suitable to house many agencies under one roof. Mayor Abram Hewitt appointed a commission to study suitable plans and plots of land in 1888, and four competitions were held between that year and 1907. The final competition was held by the Commissioner of Bridges, who had already secured a new plot of land to be used for a new trolley hub at the Manhattan base of Brooklyn Bridge. Twelve architectural firms entered the last competition, and the winning entry was received from William Mitchell Kendall,[6] a young partner of McKim, Mead and White, which had been urged to enter the contest by Mayor George B. McClellan.[6] McKim, Mead was at the time the largest architectural firm in the world, with a staff numbering over 100. Despite their standing in the architectural community, the Manhattan Municipal Building would be their first skyscraper.

The building was first occupied in January 1913, and the majority of the building's offices were opened to the public by 1916. At present the Municipal Building is home to thirteen public agencies, employing 2,000 staff in nearly 1 million square feet (90,000 m²) of floorspace.

The gilded statue of Civic Fame at the top 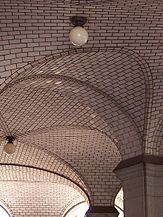 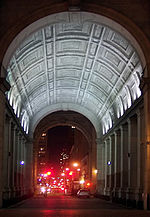 The central arch was inspired by the Roman Arch of Constantine

Various types of sculpture and relief were used in the building, but it most closely resembles classic Roman architecture, with the Arch of Constantine being the inspiration for the design of the central arch, which is large enough that automobile traffic once went through it, although in modern times the shortened Chambers Street no longer continues through to the eastern side. A screen of Corinthian columns flanks the arch.[3]

The terra-cotta vault was modeled on the entrance of the Palazzo Farnese in Rome, and the south arcade has a ceiling of white Guastavino tiles.[3]

The facade of the building was restored in 1990 by Wank Adams Slavin.[2]

The statue of Civic Fame on top of the Municipal Building, installed in March 1913, is a gilded figure designed by Adolph A. Weinman. At 25 feet (8 m) tall, it is the second largest statue in all of Manhattan. Constructed from Weinman's plaster model of sheets of copper with a hollow core, it is similar in this respect to the nearby Statue of Liberty. Standing barefoot on a sphere, the figure wears a flowing dress and a crown of laurels to signify glory. In her left hand is a five-sectioned mural crown, to represent the five boroughs of New York City: Manhattan, Brooklyn, The Bronx, Queens, and Staten Island; the building's five cupolas also represent the five boroughs. In her right hand is a shield and a laurel branch to represent victory and triumph.

Audrey Munson (1891–1996), who posed for the figure,[7][8] was also Daniel Chester French's model for America, which stands in front of the Alexander Hamilton Custom House; she was probably also Weinman's model for Day and Night from the former Pennsylvania Station, and more than a dozen other public sculptures in New York.

Weinman also sculpted the allegorical bas-relief panels at the base of the building.[3][7] 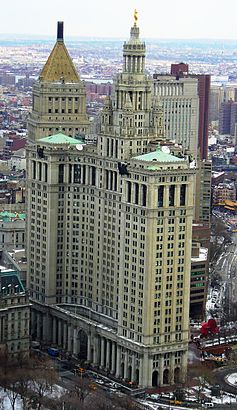 A view of the building from above with Thurgood Marshall United States Courthouse in the background.