Because the population of South Florida is largely confined to a strip of land between the Atlantic Ocean and the Everglades, the Miami urbanized area (that is, the area of contiguous urban development) is about 110 miles (180 km) long (north to south), but never more than 20 miles (32 km) wide, and in some areas only 5 miles (8.0 km) wide (east to west). South Florida is longer than any other urbanized area in the United States except for the New York metropolitan area.[9] It was the eighth most densely populated urbanized area in the United States in the 2000 census.[10] 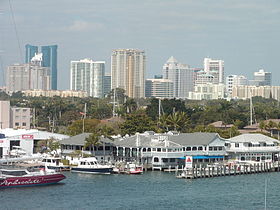 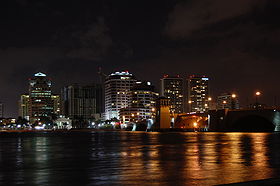 Areas with fewer than 10,000 inhabitants 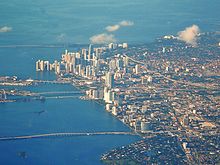 An aerial view of Downtown Miami 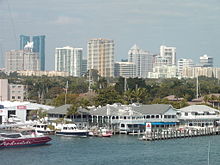 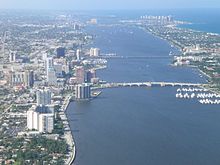 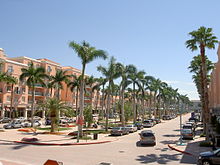 South Florida is a very diverse community with much of the population coming from all over Latin America and the Caribbean, Europe, Canada, and Asia.[citation needed]

Another large factor are residents who were former snowbirds from the Northeast. Many of them come from a variety of age-ranges, mostly retirees, and tend to be American Jews, American Muslims, Italian Americans, Irish Americans, African American, Nicaraguan American, Stateside Puerto Ricans, Dominican Americans, and other second and third-generation Americans.[citation needed]

To a lesser extent, snowbirds are also from the Midwest (mostly Ohio, Illinois, and Michigan) and West Coast (mainly California,) as well as the South and the Pacific Northwest.[citation needed]

Politically speaking, South Florida is heavily Democratic. Broward County is the second most reliably Democratic county in the state,[20][21] behind only Gadsden County (where African Americans make up the majority). Palm Beach County, like Broward, is largely Democratic as well, especially amongst its Jewish community,[22] while the rest of Florida tends to follow Southern politics and vote more Republican, with the exception of certain parts of Florida where Southern culture is not as influential. With a majority Hispanic population in Miami-Dade, Republican votes are mainly by older generations of Cuban Americans most of whom had fled to the United States to escape the Communist reign of Fidel Castro, but Miami-Dade County still remains very Democratic when compared with most of Florida's other counties.[23][24][25]

South Florida has a very large Jewish community; 10.2% of the population was Jewish in the 2000 Census.[citation needed] There is also a sizable Muslim community numbering at 70,000 some of whom are American born converts to Islam.[28]

National origin and language: Of the people living in the South Florida metro area in 2005, 63% were born in the United States (including 30% who were born in Florida) and 37% were foreign born. Among people at least five years old living in South Florida in 2005, 52% spoke English at home while 48% spoke some other language at home. Of those speaking a language other than English at home, 78% spoke Spanish and 22% spoke some other language (mainly Haitian Creole, but also French, German, Hebrew, Italian, Portuguese, Russian or Yiddish). About 47% reported that they did not speak English "very well."

The Port of Miami is the world's largest cruise ship port. 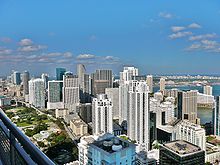 The urban neighborhood of Brickell in Downtown Miami contains the largest concentration of international banks in the U.S.

Occupations and Type of Employer: Among the most common occupations were: 32% were management, professional, and related occupations, 30% were sales and office occupations, 18% were service occupations, 11% were construction, extraction, maintenance and repair occupations, and 9% were production, transportation, and material moving occupations. 81% of the people employed were Private wage and salary workers; 12% were Federal, state, or local government workers; and 7% were Self-employed in own not incorporated business workers.

Traveling to Work: 79% of South Florida workers drove to work alone in 2005, 10% carpooled, 4% took public transportation, and 4% used other means. The remaining 3% worked at home. Among those who commuted to work, it took them on average 28.5 minutes to get to work.

Property tax increase: In March 2009, South Florida lawmakers passed a 5–10% hike in property tax millage rates throughout the metropolitan area to fund the construction of new schools and to fund understaffed schools and educational institutions, resulting in an increase in residents' property tax bills beginning in the 2009 tax year. 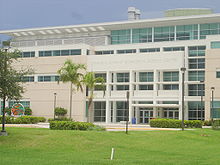 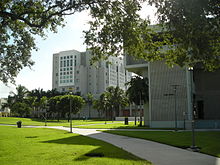 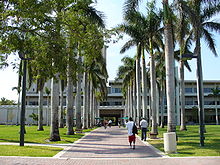 In Florida, each county is also a school district. Each district is headed by an elected school board. A professional superintendent manages the day-to-day operations of each district, who is appointed by and serves at the pleasure of the School Board.

Some colleges and universities in South Florida include: 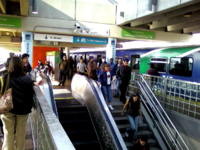 Government Center is one of the main stations for the Metrorail and Metromover.
See also: Transportation in South Florida

The South Florida metropolitan area is served by five interstate highways operated by the Florida Department of Transportation (FDOT) in conjunction with local agencies. Interstate 95 (I-95) runs north to south along the coast, ending just south of Downtown Miami at South Dixie Highway (US 1). I-75 runs east to west, turning south in western Broward County and connecting suburban north Miami-Dade to Naples on the Southwest Coast via Alligator Alley, which transverses the Florida Everglades before turning north. I-595 connects the Broward coast and downtown Fort Lauderdale to I-75 and Alligator Alley. In Miami, I-195 and I-395 relay the main I-95 route east to Biscayne Boulevard (US 1) and Miami Beach across Biscayne Bay via the Julia Tuttle and MacArthur causeways.

The urban bypass expressway in greater Fort Lauderdale is the Sawgrass Expressway (SR 869), connecting the northern Broward County coast at I-95 and Deerfield Beach to I-595 and I-75 at Alligator Alley in Sunrise. 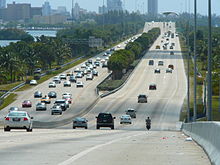 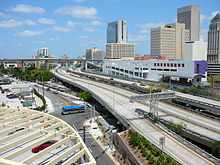 The metropolitan area is served by three major commercial airports. These airports combine to make the fourth largest domestic origin and destination market in the United States, after New York City, Los Angeles, and Chicago.[31]

The following smaller general aviation airports are also in the metro area:

The metropolis also has four seaports, the largest and most important being the Port of Miami. Others in the area include Port Everglades, Port of Palm Beach and the Miami River Port.

Miami-Dade Transit (MDT) is the largest public transit agency in Florida, operating rapid transit, people movers, and an intercity bus system. Metrorail is Florida's only rapid transit, currently with 22 stations on a 22.4-mile (36.0 km) track, and expanding to 23 stations and a 24.9-mile (40.1 km) track upon the completion of Miami Central Station at Miami International Airport in 2012. The Downtown Miami people mover, Metromover, operates 21 stations and three lines on a 4.4-mile (7.1 km) track through the Downtown neighborhoods of the Omni, the central Downtown, and Brickell. Metrobus is serves the entirety of Miami-Dade County, also serving Monroe County as far south as Marathon, and Broward County as far north as downtown Fort Lauderdale. In Broward County, Broward County Transit runs public buses, as does Palm Tran in Palm Beach County. Additionally, the South Florida Regional Transportation Authority operates Tri-Rail, a commuter rail train that connects the three of the primary cities of South Florida (Miami, Fort Lauderdale, and West Palm Beach), and most intermediate points.

A view of Biscayne National Park in Miami-Dade County

South Florida has a tropical climate, the only major metropolitan area in the 48 contiguous states that falls under that category. More specifically, it generally has a tropical monsoon climate (Köppen climate classification, Am).[32] The metropolis does experience cold fronts from November through March, however most of the year is warm and humid and the mean temperature for any month is never below 64.4 °F (18 °C). In addition, the metropolis sees most of its rain in the summer (wet season) and is mainly dry in winter (dry season). The wet season, which is hot and humid, lasts from May to October, when it gives way to the dry season, which features mild temperatures with some invasions of colder air, which is when the little winter rainfall occurs – with the passing of a front. The hurricane season largely coincides with the wet season.[33]

In addition to its sea-level elevation, coastal location and position just above the Tropic of Cancer, the area owes its warm, humid climate to the Gulf Stream, which moderates climate year-round. A typical summer day does not see temperatures below 75 °F (24 °C). Temperatures in the high 80s to low 90s (30–35 °C) accompanied by high humidity are often relieved by afternoon thunderstorms or a sea breeze that develops off the Atlantic Ocean, which then allow lower temperatures, although conditions still remain very muggy. During winter, humidity is significantly lower, allowing for cooler weather to develop. Average minimum temperatures during that time are generally in the 50s to around 60 °F (10–15 °C), occasionally dipping into the 40s (5–9 °C) and rarely below 35 °F (2 °C). The average maximum for South Florida during the winter is around 75 °F (24 °C).

Hurricane season officially runs from June 1 through November 30, although hurricanes can develop outside that period. The most likely time for South Florida to be hit is during the peak of the Cape Verde season, mid-August through the end of September.[34] Due to its location between two major bodies of water known for tropical activity, South Florida is also statistically the most likely major area to be struck by a hurricane in the world, trailed closely by Nassau, Bahamas, and Havana, Cuba. Many hurricanes have affected the metropolis, including Betsy in 1965, Andrew in 1992, Irene in 1999, and Hurricanes Katrina and Wilma in 2005. In addition, a tropical depression in October 2000 passed over the city, causing record rainfall and flooding. Locally, the storm is credited as the No Name Storm of 2000, though the depression went on to become Tropical Storm Leslie upon entering the Atlantic Ocean.

The Stephen P. Clark Government Center in Downtown Miami is the headquarters of the Miami-Dade County government.

According to the August 14, 2008 Time magazine article, "Democrats are mounting serious challenges to at least two of Miami's three Republican lawmakers" and that "the Miami challenges have caught the GOP off guard. Democratic voter registration in Miami-Dade County, as in other places, is up, and Republican registration is down."[39] 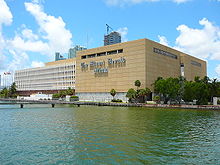 South Florida is served by several English-language and two major Spanish-language daily newspapers. The Miami Herald, headquartered in Downtown Miami, is Miami's primary newspaper with over a million readers. It also has news bureaus in Broward County, Monroe County, and Nassau, Bahamas. The South Florida Sun-Sentinel circulates primarily in Broward and southern Palm Beach counties and also has a news bureau in Havana, Cuba. The Palm Beach Post serves mainly Palm Beach County, especially the central and northern regions, and the Treasure Coast. The Boca Raton News publishes five days a week and circulates in southern Palm Beach County.[40] El Nuevo Herald, a subsidiary of the Miami Herald, and Diario Las Americas,[41] are Spanish-language daily papers that circulate mainly in Miami-Dade County. La Palma and El Sentinel are weekly Spanish newspapers published by the Palm Beach Post and Sun-Sentinel, respectively, and circulate in the same areas as their English-language counterparts.

In addition to the Miami-Fort Lauderdale market, West Palm Beach has its own. It is the 49th largest radio market and the 38th-largest television market in the U.S. Television stations serving the West Palm Beach area include WPTV (NBC), WPEC (CBS), WPBF (ABC), WFLX (FOX), WTVX (The CW), WXEL (PBS), WTCN (MyNetworkTV), and WPXP (ION). The West Palm Beach market shares use of WSCV and WLTV for Telemundo and Univision respectively. Also, both markets cross over and tend to be available interchangeably between both areas.

See also: List of urbanized areas in Florida (by population)