In 2006, Progressive Farmer rated Ontario County as the "Best Place to Live" in the U.S., for its "great schools, low crime, excellent health care" and its proximity to Rochester.

When counties were established in New York State in 1683, the present Ontario County was part of Albany County. This was an enormous county, including the northern part of New York State as well as all of the present State of Vermont and, in theory, extending westward to the Pacific Ocean. This county was reduced in size on July 3, 1766 by the creation of Cumberland County, and further on March 16, 1770 by the creation of Gloucester County, both containing territory now in Vermont.

On March 12, 1772, what was left of Albany County was split into three parts, one remaining under the name Albany County. One of the other pieces, Tryon County, contained the western portion (and thus, since no western boundary was specified, theoretically still extended west to the Pacific). The eastern boundary of Tryon County was approximately five miles west of the present city of Schenectady, and the county included the western part of the Adirondack Mountains and the area west of the West Branch of the Delaware River. The area then designated as Tryon County now includes 37 counties of New York State. The county was named for William Tryon, colonial governor of New York.

In the years prior to 1776, most of the Loyalists in Tryon County fled to Canada. In 1784, following the peace treaty that ended the American Revolutionary War, the name of Tryon County was changed to honor the general, Richard Montgomery, who had captured several places in Canada and died attempting to capture the city of Quebec, replacing the name of the hated British governor. Seth Reed, a Colonel in the Battle of Bunker Hill moved here with his family as a Pioneer between 1787 and 1795. see also Geneva (town), New York[1]

In 1796, Ontario County was reduced in size by the splitting off of Steuben County.

In 1802, Ontario County was reduced in size by the splitting off of Genesee County. The actual area split off from Ontario County was much larger than the present county, also including the present Allegany, Cattaraugus, Chautauqua, Erie, Niagara, Orleans and Wyoming Counties and parts of Livingston and Monroe Counties.

In 1821, portions of Genesee County were combined with portions of Ontario County to create Livingston and Monroe Counties. 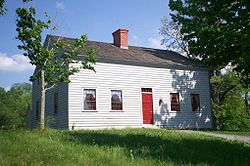 Home of the Joseph Smith, Sr. family in Manchester, known as the "frame home".

Latter Day Saint movement founder Joseph Smith, Jr. lived in Manchester in the 1820s on the border with Palmyra and several events in the early history of the movement occurred in Ontario County. Hill Cumorah in Manchester is where Smith is said to have discovered the Golden plates which contained the writings later known as the Book of Mormon. Smith visited the hill each year on the fall equinox (September 22) between 1823 and 1827 and claimed to be instructed by the angel Moroni. Smith said he was finally permitted to take the record on September 22, 1827. The Book of Mormon would be published in Palmyra in 1830. The 110-foot (34 m) hill (which was then unnamed) is on the main road toward Canandaigua from Palmyra to Manchester (modern State Route 21) and was only a few miles from Joseph Smith's home. Since the 1930s the Hill Cumorah Pageant is held annually at the hill by The Church of Jesus Christ of Latter-day Saints and regularly attracts thousands to its performances.[2] The church also maintains a visitors' center at the hill and the former Smith property and homes, which straddles the border between Ontario and Wayne counties, as well as the Palmyra New York Temple.

The county is governed by a Board of Supervisors, and uses the Board-Administrator system with a County Administrator. The Board of Supervisors has twenty-one members, one from each town, two from the city of Canandaigua, and three from the city of Geneva. As of 2004 the county government has over 800 full time employees (augmented by another 360 seasonal or available part-time workers), and a budget of $136 million. The county is similar to much of the rest of rural Upstate New York by being a Republican leaning county. In 1996 the county voted democratic for the first time since 1964. In 2008 John McCain narrowly edged a victory over Barack Obama by less than 1%.