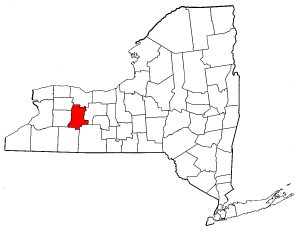 Livingston County is a located in the of . As of the 2000 census, the population was 64,328. It is named after Robert R. Livingston, delegate to the 1775 , member of the committee that drafted the Declaration of Independence, and father-in-law of , after whom Montgomery County (and similarly named counties in many other states) were named. Its is Geneseo.

When counties were established in New York State in 1683, the present Livingston County was part of Albany County. This was an enormous county, including the northern part of New York State as well as all of the present State of and, in theory, extending westward to the . This county was reduced in size on , by the creation of Cumberland County, and further on , by the creation of Gloucester County, both containing territory now in Vermont.

On , , what was left of Albany County was split into three parts, one remaining under the name Albany County. One of the other pieces, Tryon County, contained the western portion (and thus, since no western boundary was specified, theoretically still extended west to the Pacific). The eastern boundary of Tryon County was approximately five miles west of the present city of Schenectady, and the county included the western part of the and the area west of the West Branch of the . The area then designated as Tryon County now includes 37 counties of New York State. The county was named for , colonial governor of New York.

In the years prior to 1776, most of the Loyalists in Tryon County fled to . In 1784, following the peace treaty that ended the , the name of Tryon County was changed to Montgomery County in order to honor the general, , who had captured several places in Canada and died attempting to capture the city of , replacing the name of the hated British governor.

Genesee County was created by a splitting of Ontario County in 1802. This was much larger than the present Genesee County, however. It contained the present Allegany, Cattaraugus, Chautauqua, Erie, Niagara, Orleans, Wyoming, and portions of Livingston and Monroe Counties.

Livingston County was formed from Genesee and Ontario Counties in 1821.

Livingston County is home to the State University of New York, College at Geneseo (now SUNY Geneseo), one of the top liberal arts colleges in the country.Fact|date=February 2007

Livingston County is located in , south of Rochester and east of Buffalo.