This article is about the county in New York. For other uses of "Chautauqua," see Chautauqua (disambiguation).

Chautauqua County is a county located in the U.S. state of New York. As of the 2010 census, the population was 134,905. Its name may be a contraction of a Seneca Indian word meaning "bag tied in the middle". Its county seat is Mayville, and its largest city is Jamestown.

On February 9, 1811, Chautauqua was completely organized, and so its separate government was launched.[2] This established Chautauqua as a county of 1,100 square miles (2,848.99 square km) of land. Chautauqua was never altered.

Chautauqua County, in the southwestern corner of New York State, along the New York-Pennsylvania border, is the westernmost of New York's counties. Chautauqua Lake is located in the center of the county, and Lake Erie is its northern border.

Part of the Eastern Continental Divide runs through Chautauqua County. The area that drains into the Conewango Creek (including Chautauqua Lake) eventually empties into the Gulf of Mexico; the rest of the county's watershed empties into Lake Erie and out into the North Atlantic Ocean. This divide, known as the Chautauqua Ridge, can be used to mark the border between the Southern Tier and the Niagara Frontier. It is also a significant dividing point in the county's geopolitics, with the "North County" being centered around Dunkirk and the "South County" centered around Jamestown each having their own interests.[3]

Chautauqua County was governed by a board of supervisors until 1975, when a new county charter went into effect with provisions for a county executive and a 13-seat county legislature.[7] The county council currently consists of 25 members each elected from single member districts.

Most of the county is in the 150th New York State Assembly district, represented by Andy Goodell, with the exception of the eastern tier of towns, which are in the 149th district represented by Joseph Giglio. The entire county is within the bounds of New York's 27th congressional district (served by Brian Higgins) and the New York State Senate 57th district (served by Catharine Young). Prior to 2003, the county was part of New York's 31st congressional district (now the 29th), but was controversially redistricted out of that district and into what is now the 27th, and was replaced in the 29th district by Rochester suburbs that had never before been part of the district. Chautauqua County, at the same time, joined southern Erie County and portions of the City of Buffalo in the 27th, areas that had also never been in the same district with each other. In both cases, the suburban additions were significantly more Democratic populations than the rural 31st was, leading to Democrats winning both portions of the now-divided territory and accusations of cracking-based gerrymandering.

Chautauqua County has been a perfect bellwether county since 1980, having correctly voted for the winner of the presidential election in each election; the county missed twice between 1960 and 1976.

Jamestown Community College has two campuses in the county at Jamestown and Dunkirk. The State University of New York at Fredonia is located in the northern part of the county. Jamestown Business College offers two year degrees, certificates, and a four year degree in Jamestown. 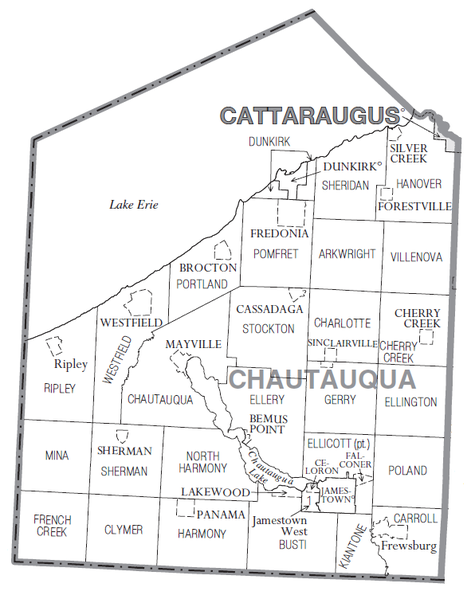