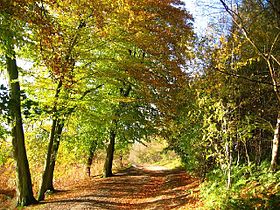 Delamere Forest or Delamere Forest Park is a wood in the Cheshire West and Chester area of Cheshire, England, near the town of Frodsham. It includes 972 hectares (2,400 acres) of mixed deciduous and evergreen woodland, centred at around SJ548704, making it the largest area of woodland in Cheshire.[1] The name means "forest of the lakes".[2]

Delamere Forest is the remnant of the Forests of Mara and Mondrem, which covered over 60 square miles (160 km2) in the north-west of the county in the 11th century. A hunting forest of the Norman Earls of Chester, it was subject to the harsh forest law, which greatly limited agricultural use for centuries. Ownership passed to the Crown in 1812 and then to the Forestry Commission, which now manages the forest, shortly after its establishment in 1919.

The area also includes Old Pale hill, the high point of the northern mass of the Mid Cheshire Ridge, and Blakemere Moss, a lake around 1 km in length. Black Lake, a rare example of quaking bog or schwingmoor, has been designated a Site of Special Scientific Interest (SSSI) and forms part of an international Ramsar site; Linmer Moss has also been designated an SSSI for its fenland habitat. The white-faced darter, a species of dragonfly that is rare in the UK, has been recorded at Delamere Forest, and marsh fern and white sedge, wetland plants that are rare in Cheshire, are found here.

A popular recreational area, Delamere Forest is used by walkers, cyclists, mountain bikers and horse riders. The forest is also a venue for outdoor concerts. 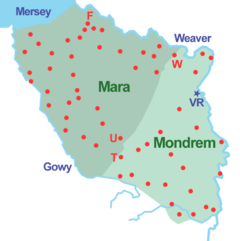 Delamere Forest is the remnant of the twin medieval Forests of Mara and Mondrem, which in the 11th century covered over 60 square miles (160 km2), stretching from the Mersey in the north to a few miles north of Nantwich in the south, and from the Gowy in the west to the Weaver in the east.[2][3] At a date somewhere between 1277 and 1536, the forest encompassed over sixty townships or villages.[3] One of the hunting forests of the Norman Earls of Chester, it might have earlier been an Anglo-Saxon hunting forest.[3] In this context, "forest" means an area outside the common law and subject to forest law; it does not imply that the area was entirely wooded, and the land remained largely in private ownership.[3] Game was hunted with dogs and included wild boar, and red, fallow and roe deer.[4] During the early Norman period, the penalties for killing game were blinding, mutilation or execution; these savage punishments were gradually replaced by huge fines.[5]

The original woodland was mixed, predominantly oak, but also including elm, lime, yew, chestnut, fir, larch, beech, ash, silver birch, hazel, willow and alder.[6][7] The forest area also encompassed heath and wetland, as well as pasture, arable land and even small settlements.[3][8] Agriculture was, however, allowed within the forest boundaries only under severe restrictions; assarting, or enclosing and clearing new land for agriculture, was prohibited until 1215.[5][9]

The northerly Forest of Mara remained wooded in the 14th century, and still retained a population of wild boar and wolves. By that date, however, large areas of the southerly Forest of Mondrem had been cleared.[6] 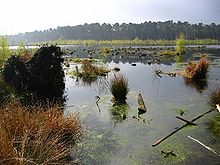 Blakemere Moss in 2004, six years after it was flooded

A total of 7,755 acres (3,138 ha) in the south of the Forest of Mara, a small fraction of the original area of Delamere Forest, remained a hunting forest until 1812, when an Enclosure Act was passed disafforesting the remaining forest (that is, returning its legal status to ordinary land) and transferring ownership of the remnant half to the Crown and half to surrounding major landowners.[10][11][12] The Forestry Commission, established in 1919,[13] took over the management of Delamere Forest in 1924; the land was managed for timber production.[14][15] Since 1968, the Forestry Commission has worked with the county council to promote recreational usage of the area.[16]

Blakemere Moss was drained in around 1815, supposedly by prisoners from the Napoleonic Wars. During the 19th century, it was unsuccessfully planted with oak, and later with Scots pine. The Forestry Commission planted the moss with pine and western hemlock during the 1940s, which proved uneconomic.[17] It was decided in 1992 to restore Blakemere Moss as a wetland environment, which was achieved in 1998 by clear-felling the area and then flooding it.[17][18] The restored lake now provides a habitat for wildlife, particularly birds. Following the success of this project, it was announced in January 2010 that a further 33 hectares (82 acres) of drained fenland at four sites in the Delamere Forest area would be rewetted as part of Natural England's "Wetland Vision" scheme.[19]

Delamere Forest forms part of the Mersey Forest, an initiative to increase woodland coverage in areas close to urban communities.[1][20] Nearly all the Forestry Commission land is open access land under the Countryside and Rights of Way Act 2000.[21][22] A few small additional areas contiguous with the Forestry Commission land are also wooded.[21]

The Mid-Cheshire Railway Line runs east–west through Delamere Forest; Delamere railway station is located at SJ555704, around ½ mile (800 m) from the Linmere Visitor Centre. The B5152 road runs north–south through the forest, and Ashton Road runs east–west.[18][21] The National Cycle Network Cheshire Cycleway (Regional Route 70) follows Ashton Road.[18][23] The nearest town is Frodsham, to the north-west; nearby settlements (anti-clockwise from the south) include Delamere, Cuddington, Norley, Kingsley, Mouldsworth and Kelsall.[21] 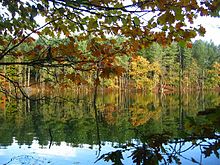 The majority of the modern Delamere Forest falls within the Mouldsworth Gap, a break in the Mid Cheshire Ridge which runs north–south through the centre of Cheshire. This region originated at the end of the last ice age, when glacial meltwaters formed a vast lake in the West Cheshire basin which burst through the sandstone ridge, and deposited large amounts of sand and gravel across an extensive outwash fan on the eastern side of the ridge.[8][24] The soils are very varied, including brown earths, podsols, peats and gleys. One valley adjacent to the railway line has eight different soil types within a small area, and hosts a soil trail.[25]

This part of Delamere Forest is undulating in character, with elevations predominantly in the range 60–90 metres.[21] It is composed of numerous hummocks and peatland basins, some of which are glacial in origin while others have been created by sand extraction.[19][26] The basins form lakes and mosses (bogs) within the forest, the largest of which is Blakemere Moss, which originated in two glacial kettle holes and is now a lake around 1 km in length.[18] Other sizeable wetlands include Black Lake, Dead Lake and Linmer Moss.[18] This forest area has several named local high points, including Hart Hill, Hunger Hill and Manley Hill.[18][21]

The Old Pale hill (176 metres; SJ543696) stands towards the south of the Forestry Commission-owned area; it forms the high point of the northern mass of the Mid Cheshire Ridge.[18][21] The summit, Pale Heights, has a trig point and three transmitter masts which carry radio, television and telephone signals.[21][27] There is a view point with views of seven counties: Cheshire, Derbyshire, Lancashire, Shropshire and Staffordshire in England, and Denbighshire and Flintshire in Wales.[18]

Delamere Forest encompasses broadleaved and mixed woodlands, blocks of coniferous plantation, as well as grassland and wetland.[1][8] The area provides a habitat for numerous woodland bird species, including nuthatches, treecreepers, crossbills, siskins, tawny owls and greater spotted and green woodpeckers.[18][28][29] Dragonflies such as the southern hawker can be seen in the wetland areas; the nationally scarce white-faced darter has been observed at several sites within the forest, including Black Lake.[28][30][31] Butterflies such as the small tortoiseshell are common in the Old Pale area.[18][28] Adders have been observed in the woodland, and mammals seen here include badgers, foxes and bats.[18]

Two Sites of Special Scientific Interest (SSSIs) lie within the area of Delamere Forest owned by the Forestry Commission. Black Lake (SJ537709) is an example of the rare quaking bog or schwingmoor habitat, a type of bog in which bog vegetation forms a raft which floats on top of water. The site is particularly notable for including the very earliest stages in quaking bog development, although all stages are present, from open water to largely consolidated schwingmoor in the process of colonisation by Scots pine. In addition to Sphagnum species, common sundew and the locally rare white sedge are present. The site is managed by Cheshire Wildlife Trust and forms part of the Midland Meres and Mosses Ramsar site.[31][32]

Linmer Moss (SJ546706) is unusual within Delamere Forest in having a fen environment which is not dominated by Sphagnum species. The vegetation is predominantly tussock sedge and reedmace. Marsh fern and white sedge, which are rare in Cheshire, are found here; other species include cuckooflower, marsh bedstraw, marsh cinquefoil and Sphagnum squarrosum. The site has experienced rapid changes in water levels during its history, and contains the trunks of birch trees which died when the area flooded. It is now being colonised by alder and willow.[33]

Multiple other wetland SSSIs fall within the historical bounds of Delamere Forest, including Hatch Mere and Flaxmere Moss, which lie immediately outside the Forestry Commission boundary, as well as Abbots Moss, Oak Mere and Pettypool Brook Valley.[34][35][36][37][38] Little Budworth Common SSSI and the woodland around Abbots Moss are considered to be among the closest modern representatives of the forest before human settlement in the area.[39] 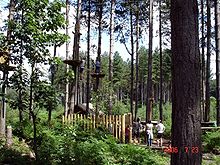 Part of the Go Ape course

Delamere Forest is a popular recreational area, drawing visitors mainly from nearby urban areas.[16] Three long-distance footpaths meander through the forest, the Sandstone Trail, Delamere Way and Baker Way. Two waymarked circular walking trails of 1.7 and 2.7 miles (2.7 and 4.3 km) and two waymarked cycling trails of 4 and 7 miles (6.4 and 11 km) start near the Linmere Visitor Centre; the cycling trails are also open to walkers. There are two easy-access circular trails which are suitable for wheelchair users and pushchairs; one starts at Barnsbridge car park and leads to Blakemere Moss (0.75 miles (1.2 km) in length), the other explores Old Pale hill from the Linmere Visitor Centre. Numerous non-waymarked footpaths are also available for both cyclists and walkers. There is a large area of dirt cycle jumps on Manley Hill for extreme mountain biking enthusiasts.[1][18]

Other activities include horse riding, jogging, orienteering, bird watching and nature study.[16][40] Britain's largest Go Ape facility opened in Delamere Forest in 2006; it includes numerous zip wires, Tarzan swings, tightropes and nets high in the treetops.[18][41] Delamere Forest is the venue for the northern Hellrunner cross-country race, and the Sandstone Trail Race finishes in the forest.[42][43]

Since 2003, the Old Pale area of the forest has served as a music venue, playing host to performers including Ian Brown, The Charlatans, Jools Holland, Status Quo, Sugababes, Paul Weller, The Zutons, Doves and Elbow.[18][44] The forest has also been used for open-air theatre.[45] 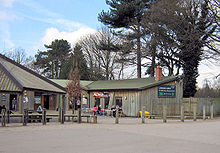 The Linmere Visitor Centre (SJ546703) has an information centre, shop, cycle hire facility, covered picnic area, café and toilets (including disabled).[46][47] Picnic facilities are also found at numerous points within the forest including most parking areas, and refreshments are available at weekends at the Barnsbridge and Whitefield car parks during the peak season.[48] A classroom and "learning garden" near the visitor centre can be hired for educational visits.[46][49]