In the UK, all of the band's eleven studio albums have charted in the Top 40 in the UK Albums Chart, three of them being number ones. They have also achieved seventeen Top 30 singles, and four Top 10 hits in the UK Singles Chart.

Although the name The Charlatans was used when original members of the band were located in the West Midlands, many sources state that they formed in Northwich, Cheshire.[2] This is because the band relocated to the home town of new lead singer Tim Burgess (who lived in Northwich) before the 1990 release of The Charlatans' debut single "Indian Rope", on the band's own Dead Dead Good Records label. This means that, based on the definition of the hometown used by Guinness World Records, the band formed in Northwich and consequently, Northwich is recorded as their home town in such publications as British Hit Singles & Albums. 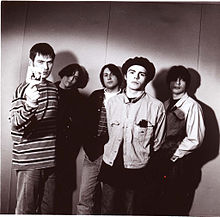 The Charlatans during their early days

The debut single, "Indian Rope" proved an indie hit and the group soon found a major label, Beggars Banquet off-shoot Situation Two, in time for the release of "The Only One I Know" which reached the Top 10 in the UK Singles Chart.[3] A further single, "Then", and debut album Some Friendly, were released later that year. Around this time The Charlatans were forced to add UK to their name for an American tour due to competing claims by a 1960s rock band also known as The Charlatans.[1]

Baker left the band after 1991's "Over Rising" single to be replaced by Mark Collins (no relation to Rob), and the band brought in producer Flood for their second album Between 10th and 11th (named after the address of the New York Marque, site of the group's first US concert). Released in early 1992, the album failed to reach the Top 20 in the UK Albums Chart.[3] However, the Top 20 success of the lead single "Weirdo" and a double weekend of gigs ('Daytripper') in Blackpool and Brighton with Ride kept them in the public eye.[3][4]

Later that year, the band suffered a major setback when Rob Collins was charged with armed robbery after his friend had robbed an off licence while he was waiting in the car outside.[1] Collins claimed to have no foreknowledge of the robbery until he heard a gunshot inside the shop and his friend exited, although he later admitted that he should not have picked his friend up after he realised what he had done. At court, he pleaded guilty to the lesser charge of "assisting an offender after an offence" and served four months in prison.[1]

In 1995 the band's self-titled fourth album saw them become major UK stars again, topping the UK albums chart and spawning the Top 20 single "Just When You're Thinkin' Things Over".[3]

Keyboard player Rob Collins was killed in a car crash during the recording of fifth album Tellin' Stories on 22 July 1996. The Charlatans decided to continue, and the Primal Scream and former Felt keyboardist Martin Duffy was drafted in, particularly for The Charlatans support slot with Oasis at their Knebworth concerts in mid-1996, until a permanent replacement for Collins could be found.

Tellin' Stories was released in 1997 featuring contributions from both Rob Collins and Duffy and in the singles "One to Another", "North Country Boy" and "How High" the group had their biggest UK hits to date.[3]

After releasing the career-spanning compilation Melting Pot the band's contract with Beggars Banquet was up, and they signed to Universal Records.[1] Relations with 'Beggars' remained strong however, and the band helped put together the B-sides collection Songs From The Other Side and DVD Just Lookin' 1990 - 1997, showcasing all their promotional videos, and a selection of live recordings from that era.

Us And Us Only saw the start of a new era for The Charlatans. Their first release for Universal saw new keyboard player Tony Rogers make his Charlatan's album debut[1] (he had previously toured in support of Tellin' Stories and contributed to b-sides "Keep It to Yourself" and "Clean Up Kid" from the "How High" single) and the band took on a slightly country sound, heavily influenced by Burgess's love of Bob Dylan. The soul influenced Wonderland followed in 2001, before Up At The Lake was released in 2004.

The band released their ninth full-length album on 10 April 2006, their first for new label Sanctuary Records. Titled Simpatico, the reggae and dub tinged album featured tracks like the fan favourite "NYC (There's No Need to Stop)", first single "Blackened Blue Eyes", and was produced by Jim Lowe.[5] The single charted at number 28. The album reached the top 10 in its first week of release, but dropped out of the charts shortly after.[3]

Their follow-up to Simpatico was the career-spanning singles compilation entitled Forever: The Singles which was released on CD and DVD on 13 November 2006. It was preceded by the re-recorded (remixed by Youth) song "You're So Pretty We're So Pretty" which appeared originally on their 2001 album Wonderland. The band seem in a good place now, happy with their level of success and keen to record their next album in 2007, as they told STV in this interview in November 2006. In an interview for their Simpatico album, the band mentioned lack of shower facilities and bad bus drivers as the worst aspects of touring. "[Bus drivers] get so bloody moody. They don't want you on the bus, yet you're paying them a fortune to drive you. They'd rather drive around the whole of the country with nobody in the back".[6]

The band played a number of high-profile supporting gigs in mid-2007, including for The Who and The Rolling Stones, at venues including Wembley Stadium and Twickenham Stadium in London, as well as the Bingley Music Live event, Nass festival 2007, and at Delamere Forest in Cheshire. A recording of Live At Delamere Forest was released as a download only via the official website in five parts for a limited time only.

On an independent label (2008-present)

In an October 2007 issue of the NME, the band contributed the song "Blank Heart, Blank Mind" to the magazine's free Love Music, Hate Racism compilation CD. Later the same month, the new single "You Cross My Path" was released as a free download exclusively through the XFM website. On the 3 March 2008, The Charlatans teamed up with Xfm again to become the first UK band to release an album completely free to download via a radio station. This was preceded a week earlier by the second single from the album, "Oh! Vanity". The album, titled You Cross My Path, is The Charlatans' tenth studio album and received a physical CD/LP release on 19 May 2008 on the Cooking Vinyl label, coinciding with a full UK tour.

In January 2010, Brookes has stated via the official Charlatans website blog that the Charlatans are back in the studio to work on their eleventh album planned for release in August 2010.[7] 2010 also coincides with twentieth anniversary of the band's debut album, Some Friendly which they played live at Primavera Sound Festival 2010.[8] The album is due for re-issue with bonus material, and an extensive UK tour for both the re-issue and new album launch is due to take place to support these releases.

Their eleventh studio album, Who We Touch, was released on 6 September 2010. The first single release was "Love Is Ending". The album charted at #21 in the UK Albums Chart.

On 15 September 2010, Brookes collapsed during a performance in Philadelphia. A few days later he was diagnosed with a brain tumor.[9] Since then, he has apparently made a full recovery and the band is playing live again.[10]