Davenham (pronounced Day'vnum) is a rural village and civil parish approximately 3 kilometres (1.9 mi) south of the town of Northwich, part of the Borough of Cheshire West and Chester and the ceremonial county of Cheshire in England. It has a population of 5,655.[1] The village is close to the A556 and A533 roads and both the River Dane and River Weaver. It is the birthplace of marathon runner Paula Radcliffe.

Davenham is recorded in the Domesday Book as Devenham. Its name means "hamlet on the River Dane".[2] The site of the Norman Shipbrook Castle by the river Dane is indicated by the name of Castle Hill, between Shipbrook Bridge, and Shipbrook Hill Farm, but no traces now remain.

Between 1996 and 2006 a large housing development was built on farmland to the north west of the village centre. The estate is known as Kingsmead and is separated from the historic village of Davenham by the A556, Northwich bypass. This area was originally the Kingsmead ward of the civil parish with five members representing the ward on Davenham Parish council. It has now formed a separate parish with its own Parish Council. In 2006 the Kingsmead Residents Association was formed by residents who were concerned at the state of maintenance of the public areas of the estate. By Easter 2007 the Kingsmead Residents Association had expanded to have over 500 members and has expanded its interests to cover topics such as litter on the estate, speeding on the main spine and loop roads and the adoption of the estate's roads by the County Council, in addition to the Association's primary aim which is to take over the Estate Management company responsible for the upkeep of the public areas of the estate.

Davenham Parish Council along with Moulton Parish Council decided in 2007 to part fund a P.C.S.O. (Police Community Support Officer) in order to keep a Police presence in Davenham and Kingsmead. Due to policing boundaries it was decided that 1 PCSO from Winsford NPU (Neighbourhood Policing Unit) would police Davenham and Moulton whilst a PCSO from Northwich NPU would cover Kingsmead and Leftwich.

Sign posts on the various major roads provide a 'Welcome to Davenham Village'. When travelling into Kingsmead from Northwich, the signpost situated at the entrance to the estate is geographically incorrect. At this point you are not entering 'Davenham Village', as the village itself lies the other side of the Northwich bypass, you are instead entering 'Kingsmead, part of Davenham Parish'.

The village's football team reached the final of the 1887 Welsh FA Cup, losing to Chirk. 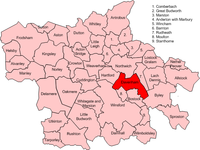 Civil parish of Davenham within the former Borough of Vale Royal

Davenham is situated in the centre of the Cheshire Plain between the River Weaver and River Dane. It is surrounded by the civil parishes of Northwich, Hartford, Rudheath, Byley, Bostock, Moulton and Winsford.

The church of St. Wilfrid goes back to the Domesday period but the current edifice is the fourth on the site, dating from a major reconstruction between 1844 and 1870 in the Victorian Gothic revival style. The tower has a recessed spire built in 1850.

Legend says that the church was founded by St Wilfrid on a journey through Cheshire in the 7th Century, but the first documented evidence of a church on the site is an existing priest and church in 1086.

Davenham has traditionally had a Primary school, Davenham Church of England Primary School. However the parish now includes parts of the Kingsmead development which includes Kingsmead Primary School built in 2004.

Both these schools are feeder schools to the County High School Leftwich as well as other, more distant secondary schools.