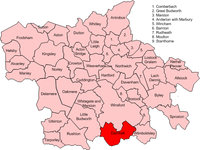 Darnhall is a civil parish and small village to the south west of Winsford in the Borough of Cheshire West and Chester and the ceremonial county of Cheshire in England. It has a population of 214.[1]

The Norman earls had a hunting lodge or summer palace at Darnhall in Over parish. There was an enclosed area where deer and wild boar were kept to be hunted by the Earl and his guests. It was there that the last Norman Earl of Chester met his death. It was rumoured that his wife, Helen the daughter of the Prince of Wales, had poisoned him in order to favour the powerful aristocrat that her daughter had married. However, as this was the time of the Second Barons' War, King Henry III took control of the county and of the manor himself and even spent time at Darnhall. It was during this time that the brook there was dammed to drive three water mills and to make pools to keep fish.[2]

The first mention of a priest is in 1307 when a Thomas de Dutton is mentioned, but it is uncertain if this was at St Chad's in Winsford or as a chaplain at Darnhall, or both. The church and responsibility for the parish was given to St Mary's Convent in Chester, who appointed the priests in charge.[2]

A small area near the eastern boundary of the civil parish falls within the Weaver Valley Area of Special County Value. The parish includes Darnhall Wood, part of the Wettenhall And Darnhall Woods Site of Special Scientific Interest, together with woodland in the adjacent Wettenhall parish.[3][4]

Darnhall is home to one of the radio telescopes that make up the Jodrell Bank MERLIN (Multi-Element Radio Linked Interferometer Network) radio telescope array linking six observing stations that together form a powerful telescope with an effective aperture of over 217 kilometres.[citation needed]