/ˈmɜrzi/) is a river in North West England. It is around 70 miles (113 km) long, stretching from Stockport, Greater Manchester, and ending at Liverpool Bay, Merseyside. For centuries, it formed part of the ancient county divide between Lancashire and Cheshire.

The Mersey is formed from three tributaries: the River Etherow, the River Goyt, and the River Tame. The modern accepted start of the Mersey is at the confluence of the Tame and Goyt, in central Stockport, Greater Manchester. However, older definitions, and many older maps, place its start a few miles up the Goyt; for example the 1911 Encyclopedia Britannica states "It is formed by the junction of the Goyt and the Etherow a short distance below Marple in Cheshire on the first-named stream." The 1784 John Stockdale map shows the River Mersey extending to Mottram, and forming the boundary between Cheshire and Derbyshire.[1] 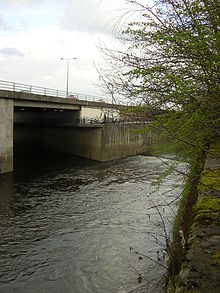 From Stockport it flows through Didsbury, Northenden, Stretford, Urmston and Flixton, then at Irlam it flows into the Manchester Ship Canal, which is the canalised River Irwell to this point. The course of the Mersey has been obliterated by the Canal past Hollins Green to Rixton although the old river bed can be seen outside Irlam and also at Warburton. At Rixton the River Bollin enters the Canal from the south and the Mersey leaves the Canal to the north, meandering through Woolston, where the Ship Canal Company's dredgings have formed a nature reserve (Woolston Eyes), and Warrington. It is tidal from Howley Weir in Warrington, although high spring tides often top the weir. A small bypass around Howley Weir, Howley Lock, was created before the ship canal existed, but is now redundant. The lock is still visible.

The River Mersey empties into the Manchester Ship Canal at Irlam

West of Warrington the river widens, and then narrows as it passes through the Runcorn Gap between the towns of Runcorn and Widnes, in Halton. The Manchester Ship Canal lies in the Gap on the southern bank of the river. The Gap is bridged by the Silver Jubilee Bridge and Runcorn Railway Bridge; as of 2008 a project known as Mersey Gateway to build a new road bridge further east is under consideration and has received some government support.[2]

From the Runcorn Gap, the river widens into a large estuary, which is three miles (5 km) wide at its widest point near Ellesmere Port. The course of the river then heads north, with Liverpool to the east and the Wirral Peninsula to the west. The Manchester Ship Canal enters the river at Eastham Locks. The eastern part of this estuary is much affected by silting, and part of it is marked on modern maps as dry land instead of as tidal. These wetlands are of importance to wildlife, and are listed as a Ramsar site.

The estuary then narrows to flow between Liverpool and Birkenhead, where it is constricted to a width of 1.2 kilometres (0.7 mi), between Albert Dock in Liverpool and the Woodside ferry terminal in Birkenhead. The river then continues into Liverpool Bay on the Irish Sea, after a total course of 68 miles.

The Estuary is also the home of Seaforth Dock, a Freeport on the Liverpool side of the river, where the river meets Liverpool Bay. The dock construction began in the 1960s opening in 1971. The dock deals with around 500,000 containers, 1,236,000 tonnes of oil, over 2.5 million tonnes of grain and animal feed, 452,000 tonnes of wood per year and with 25% of all container traffic between UK and USA making the port one of the most successful in the world. It is known world over as the "Atlantic Gateway".[3] Liverpool was the first UK port with radar assisted operations.[3]

On the Liverpool side of the estuary Liverpool Docks stretch for over 12 kilometres (7.5 mi). This is the largest enclosed interconnected dock system in the world. American author Herman Melville described Liverpool Docks as being comparable to the pyramids in the vast scale of the construction. The docks were built out into the river bed. The Mersey Docks and Harbour Board owned a granite quarry in Scotland to source the stone for the quays, so much was used in the construction.

The conurbation on both sides of the river in this area is known as Merseyside.

At 4 metres (13.1 ft) neap tide to 10 metres (32.8 ft) spring tide, the River Mersey has the second highest tidal range in Britain – second only to the River Severn. The bottleneck in the river estuary forces water to flow faster creating a deep channel at the narrows.

The strong river water currents has led to proposals for the future construction of a tidal barrage to generate electricity and create another crossing.[citation needed] Very high spring tides often generate a tidal bore starting at Hale penetrating as far upstream as Warrington.

The Mersey Ferry runs between the Pier Head at Liverpool, and the Wirral terminals at Seacombe, Wallasey and Woodside, Birkenhead.

Water quality in the River Mersey had been severely affected by industrialisation in the region, and in 1985, the Mersey Basin Campaign was established to improve water quality and encourage waterside regeneration. In 2002, oxygen levels that could support fish along the entire length were witnessed for the first time since industry began on the Mersey.[5] Salmon are now found in the river. They can be viewed jumping at Woolston and Howley Weirs between the months of September and November. Salmon parr and smolt have also been caught in tributaries of the Mersey, the Rivers Goyt and Bollin.[6] Since 2006 Atlantic Grey Seals have also ventured as far inland as Woolston.[7]

In 2009 it was announced that the river is "cleaner than at any time since the industrial revolution" and is "now considered one of the cleanest [rivers] in the UK".[8]

Ferry across the Mersey, June 2005 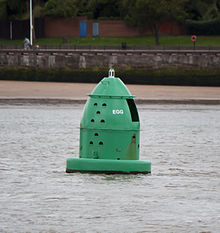 Since the construction of the Manchester Ship Canal, large commercial vessels do not normally navigate the estuary further upstream than Garston on the North Bank, or the locks into the Ship Canal at Eastham. Deep-water channels are maintained to both. Until the early 20th century, commercial traffic bound for further upstream was mainly carried in large flat-bottomed sailing barges known as Mersey Flats. These could carry cargo as far inland as Howley Wharf in Warrington and (via the Sankey Canal) to St Helens. Motor barges continued to deliver to riverside factories at Warrington until at least the 1970s, but nowadays only pleasure craft and yachts use the upper estuary and the tidal river, with a number of sailing clubs based at this point in the river. On most high tides, seagoing yachts with their masts raised can navigate as far upstream as Fiddlers Ferry – about 5 km (3.1 mi) downstream of Warrington – where there is a small marina accessed via a river lock. Although river craft can continue as far upstream as Howley Weir, there are no landing or mooring facilities. Portable craft can penetrate as far as Woolston. The barrier to further navigation here is a legal one in that the Mersey then shares its course with the Manchester Ship Canal for some miles upstream.

The river is now internationally famous thanks to the music of the 1960s known as Merseybeat or the Mersey Sound and its strong association with Liverpool. The Mersey itself was popularized in the Merseybeat song Ferry Cross the Mersey by Gerry & The Pacemakers, which was released in 1965 and featured a music video in which the group performed their song on a boat crossing the river between Birkenhead and Liverpool. It has since been covered by Ferry Aid (for a 1989 charity single to dedicated to the victims of the Hillsborough disaster)and Frankie Goes to Hollywood.

The Mersey is considered sacred by British Hindus, and is worshipped in a similar way to the River Ganges. Festival of Immersion ceremonies are held each year on the river, in which clay figures representing the Hindu Lord Ganesh, the elephant deity riding a mouse, are submerged in the river from a ferry boat. Followers also throw flowers, pictures and coins into the river.[9][10]

Moving upstream, tributaries of the Mersey include: