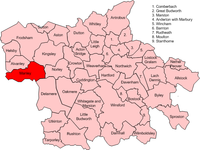 Manley is a village and civil parish in the unitary authority of Cheshire West and Chester (formerly Vale Royal) and the ceremonial county of Cheshire, in the north west of England.

Manley Has A Cafe, and a mere called manley mere