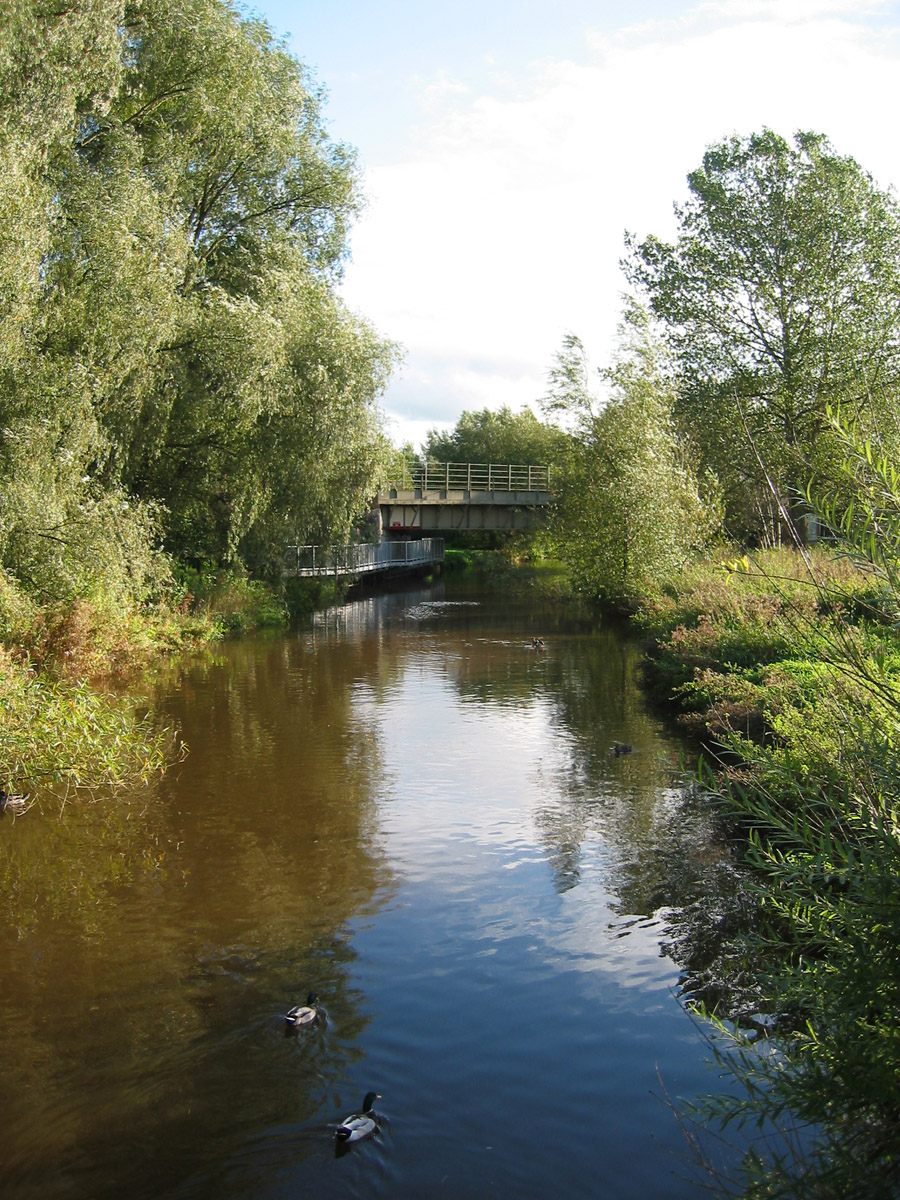 The River Weaver is a river, navigable in its lower reaches, running in a curving route anti-clockwise across west , northern .

Perhaps its most notable feature is the (), near Northwich, which links the Weaver with the some convert|50|ft|m|0|lk=on above.

From its source in the hills of west Cheshire near , it initially flows in a south-easterly direction towards the border with , fed by tributaries some of which rise in north Shropshire. Just south of the Cheshire village of , the river then starts to flow approximately northwards across the Cheshire Plain, and today empties into the at Weston Point Docks, (it previously flowed into the ).

From the Peckforton Hills, the Weaver flows through the village of , and then passes to the west of Audlem. The first significant town on the river is the market town of . Further north, it passes through , then , then flows north-west across north , joining the Manchester Ship Canal between and .

The convert|21|mi|km|0|lk=on long stretch north from Winsford Bridge has been made navigable (as the Weaver Navigation) by dredging and cuts. Acts of Parliament dating back to were introduced to allow the river to be 'canalised' to carry freight, including and chemicals).

The major town on the navigation is Northwich. Just below here, the Weaver flows past the Anderton Boat lift, which for the vast majority of leisure boats is the only connection with the rest of the waterway network. The river itself is not navigable below Sutton Weaver: navigation beyond this point (to Weston Point Docks) is on the Weston Canal, past heavy (chemical) industry.

Before the creation of the Weston Canal, the last cut of the Weaver Navigation was the short Frodsham Cut, which avoided the river loop above Frodsham and rejoined the river after descending Frodsham lock. But between and , the Weston Canal, was built to bypass the lower Weaver entirely. This canal extended the Navigation to Weston Point Docks, and hence the Manchester Ship Canal. Beyond Weston Docks, the Runcorn and Weston Canal continued to Runcorn Docks: these were in turn connected via Runcorn Locks to Runcorn town centre and the terminus of the Bridegwater Canal.

A ship lock (Marsh Lock) was also built to connect the Weston Canal (at a point roughly halfway between Sutton Weaver and Weston Point) to the Weaver at the point where it joined the Ship Canal. The old, narrow, Frodsham lock subsequently became derelict.

There is now normally no traffic on the canal to Weston Docks: of the few boats which travel between the Ship Canal and the River Weaver, all (or almost all) use Weston Marsh Lock.

There is not currently an obvious attractive "destination point" for recreational boaters heading down the Weaver Navigation, although Weston Marsh Lock and the Weston Point Docks are of interest to those who like industrial heritage. However, there are now plans to reopen the Frodsham cut, and to redevelop the Frodsham wharves on the Weaver. Frodsham is an attractive small town, but has no particular focus of interest to visitors. The proposers of the new "waterfront" believe that it will be a popular attraction to boaters and s alike.

Rowing is popular on the River Weaver, with competitive clubs in , , [cite web |url= http://www.northwichrowing.co.uk|title= Northwich Rowing Club - Official website|accessdate=2007-09-07] and Acton Bridge (The Grange School). is also popular along the river especially at Weaver Parkway where it runs adjacent to the - the railway line from to /.

Sailing is also popular on the lower reaches of the Weaver at Frodsham from the Weaver Sailing club. [cite web |url= http://www.weaver-sc.org.uk/|title= Weaver Sailing Club - website|accessdate=2007-09-07 |format= |work=] This club caters for all dinghy sailboats with racing on most Sundays.