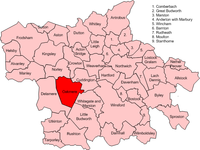 Oakmere is a village and civil parish in the unitary authority of Cheshire West and Chester and the ceremonial county of Cheshire, England.

Oakmere is situated on the A556 road, approximately 7 miles (11 km) west of Frodsham. It has three pubs, The Abbey Arms (named after the nearby Vale Royal Abbey), the Fishpool Inn (named after a now dried up fish pond used by the monks from Vale Royal abbey) and The Fourways, a former country club.[citation needed] There is also a car-sales business[1] and a caravan sales company.[2] The adjoining village of Delamere has a post-office, church and railway station on the Chester to Manchester line.

The area is mainly agricultural, and has a number of large sand quarries nearby, some of which are wet-workings.[citation needed] The lake from which the village takes its name is a Site of Special Scientific Interest.[3][4]