Crewe is a railway town within the unitary authority area of Cheshire East and the ceremonial county of Cheshire, England. According to the 2001 census the urban area had a population of 67,683. Crewe is perhaps best known as a large railway junction and home to Crewe Works, for many years a major railway engineering facility for manufacturing and overhauling locomotives, but now much reduced in size. From 1946 until 2002 it was also the home of Rolls-Royce motor car production. The Pyms Lane factory on the west of the town now produces Bentley motor cars exclusively.

Although the name Creu first appears in the Domesday Book, the modern urban settlement of Crewe was not formally planned out until 1843 by Joseph Locke to consolidate the "railway colony" that had grown up since around 1840-41 in the area near to the railway junction station opened in 1837, even though it was called Crewe by many, from the start.[1][2] Crewe was thus named after the railway station, rather than the other way round.

Until the Grand Junction Railway (GJR) company chose Crewe as the site for its locomotive works and railway station in the late 1830s, Crewe was a village with a population (c. 1831) of just 70 residents.[9] Winsford, 7 miles (11 km) to the north, had rejected an earlier proposal, as had local landowners in neighbouring Nantwich, 4 miles (6 km) away. Crewe railway station was built in fields near to Crewe Hall and was completed in 1837. 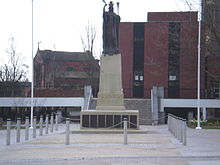 A new town grew up, in the parishes of Monks Coppenhall and Church Coppenhall, alongside the increasingly busy station, with the population expanding to reach 40,000 by 1871. GJR chief engineer Joseph Locke helped lay out the town.[9]

The town has a large park, Queen's Park (laid out by engineer Francis Webb), the land for which was donated by the London and North Western Railway, the successor to the GJR. It has been suggested that their motivation was to prevent the rival Great Western Railway building a station on the site, but the available evidence indicates otherwise.[10]

The railway provided an endowment towards the building and upkeep of Christ Church. Until 1897 its vicar, non-conformist ministers and schoolteachers received concessionary passes, the school having been established in 1842. The company provided a doctor's surgery with a scheme of health insurance. A gasworks was built and the works water supply was adapted to provide drinking water and a public baths. The railway also opened a cheese market in 1854 and a clothing factory for John Compton who provided the company uniforms, while McCorquodale of Liverpool set up a printing works.[9] Nevertheless, the dominance of the railway industry was such that times of recession were keenly felt.

Crewe crater on Mars is named after the town of Crewe. Crewe was described by author Alan Garner in his book Red Shift as "the ultimate reality". Bill Bryson described Crewe as "the armpit of Cheshire" in his 1995 book "Notes from a Small Island". 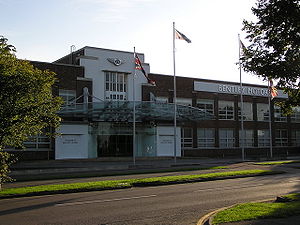 The railways still play a part in local industry at Crewe Works, which carries out train maintenance and inspection. It has been owned by Bombardier Transportation since 2001. At its height, the site employed over 20,000 people; in 2005 fewer than 1,000 remained, with a further 270 redundancies announced in November of that year. Much of the site once occupied by the works has been sold off and is now occupied by a supermarket, leisure park, and a large new health centre.

The Bentley car factory is on Pyms Lane to the west of town. As of early 2010, there are about 3,500 working at the site.[11] The factory used to produce Rolls-Royce cars, until the licence for the brand transferred from Bentley's owners Volkswagen to rival BMW in 2003.

There is a BAE Systems Global Combat Systems factory in the village of Radway Green near Alsager, producing small arms ammunition for the British armed forces.

The headquarters of Focus DIY plc and the off-licence chain Bargain Booze are in the town.

There are a number of business parks around the town hosting light industry and offices. Crewe Business Park is a 67 acre site with offices, research and IT manufacturing. Major presences on the site include Air Products, Barclay's Bank, Fujitsu Services Ltd, Focus DIY and URS Scott Wilson.[12] The 12 acre Crewe Gates Industrial Estate is adjacent to Crewe Business Park, with smaller industry including the ice cream van manufacturer Whitby Morrison. The Weston Gate area has light industry and distribution. Marshfield Bank Employment Park is to the west of the town, and includes offices, manufacturing and distribution. There are industrial and light industrial units at Radway Green.

The town has two small shopping centres; the Victoria Centre and the Market Centre. There are indoor and outdoor markets throughout the week. Grand Junction Retail Park is just outside the centre of town. Nantwich Road provides a wide range of secondary local shops, with a variety of small retailers and estate agents.

A planned redevelopment of Crewe's town centre, including the current bus station and main shopping area have currently been abandoned because of "difficult economic conditions".[13]

There were also plans to revamp the railway station moving it to Basford. This was pending a public consultation by Network Rail scheduled for autumn 2008, however, no such public consultation was made. The plan has now been abandoned and instead maintenance work is being carried out on the current station.[14]

Planning consent has been granted on Mill Street for a mixed use regeneration scheme by Clowes Developments in May 2010. It will include of a discount food store, retail and housing. Work on the first phase is likely to start late 2010 depending on the economic climate. 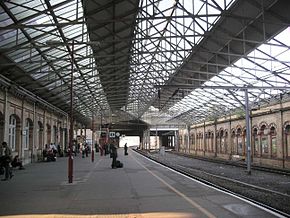 Crewe railway station is less than a mile from Crewe town centre, although it was not incorporated into the then Borough of Crewe until 1937. It is one of the largest stations in the North West and a major interchange station on the West Coast Main Line. It has 12 platforms in use and has a direct service to London (Euston) (average journey time of around 1 hour 35 minutes), Edinburgh, Cardiff, Liverpool, Manchester, Birmingham, Glasgow, Derby, Stoke-on-Trent, Chester, Wrexham, Holyhead and many other towns and cities.

The main bus company in Crewe is Arriva, which also operates in the surrounding towns and villages. Smaller operators such as GHA Coaches and D&G Coach and Bus run the shorter local routes.

The Crewe Heritage Centre is located in the old LMS railway yard for Crewe railway station. The museum has three signal boxes and an extensive miniature railway with steam, diesel and electric traction. The most prominent exhibit of the museum is the British Rail Class 370 Advanced Passenger Train. 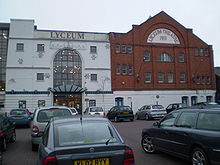 The grade-II-listed Edwardian Lyceum Theatre is in the centre of Crewe. It was built in 1911 and shows drama, ballet, opera, music, comedy and pantomime.[16] The theatre was originally located on Heath Street from 1882. The Axis Arts Centre is on the Manchester Metropolitan University campus in Crewe. It relocated from the university's Alsager Campus when it closed. The centre has a programme of touring new performance and visual art work.[17] The Box on Pedley Street is the town's main local music venue.

Crewe has six Anglican churches, three Methodist, one Roman Catholic (which has a weekly mass in Polish) and two Baptist.[18]

There is a museum dedicated to Primitive Methodism in the nearby village of Englesea-Brook.[19]

The Jacobean mansion Crewe Hall is located to the east of the town near Crewe Green. It is a grade I listed building, built in 1615–36 for Sir Randolph Crewe. Today, it is used as a hotel, restaurant and health club.

There is a multiplex Reel cinema on Phoenix Leisure Park on the endge of the town centre, as well as a bowling alley.

Queen's Park is the town main park, and is currently undergoing a £6.5 million transformation.[20] It features walkways, a children’s play area, crown green bowling, putting, a boating lake, grassed areas, memorials and a cafe. Jubilee Gardens are in Hightown and there is also a park on Westminster Street.

The weekly Crewe Chronicle, the Crewe and Nantwich Guardian and the daily Sentinel newspapers all cover the town. Local radio stations are Silk 106.9 from Macclesfield, Signal 1 and Signal 2 from Stoke-on-Trent and BBC Radio Stoke. Nantwich-based community radio station The Cat covers news, sport and local issues for the people of Crewe. Crewe TV is a Hyperlocal blog covering local events and issues.

Cheshire has adopted the comprehensive school model of secondary education, so all of the schools under its control cater for pupils of all levels of ability.[21] Until the late 1970s Crewe had two grammar schools, Crewe Grammar School for Boys, now Ruskin Sports College and Crewe Grammar School for Girls, now King's Grove High School. The town's two other secondary schools are Sir William Stanier Community School, a specialist technology and arts college, and St. Thomas More Catholic High School, specialising in mathematics and computing and modern foreign anguages.

Although there are eight schools for those aged 11–16 in Crewe and its surrounding area, South Cheshire College is one of only two local providers of education for pupils aged 16 and over, and the only one in Crewe. The college also provides educational programmes for adults, leading to qualifications such as Higher National Diplomas (HNDs) or foundation degrees. In the 2006-07 academic year 2,532 students aged 16–18 were enrolled, along with 3,721 adults.[22]

Manchester Metropolitan University's (MMU) Cheshire Faculty has one of its two campuses in Crewe, in a part of town which has been rebranded as the University Quadrant. The second campus, about 6 miles (9.7 km) away in Alsager, is being moved to Crewe over the next few years as of 2009, as Crewe becomes the university's Cheshire base for courses in business and management, the arts, exercise and sport science, humanities and social studies, education and teacher training.[23] Initial expansion of the Crewe campus to accommodate the extra students and staff included the opening of a £30-million student village in 2005, part of an estimated £70 million investment being made in the campus.[24] 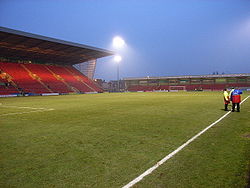 Crewe's local football club is Crewe Alexandra. During the late 20th century the club enjoyed something of a renaissance under the management of Dario Gradi, playing in the First Division – the second tier of the professional pyramid – for five seasons from 1997–2002. They were relegated to the Second Division in the 2002–03 season, but were promoted back to the First Division after only one season. At the end of the 2005–06 season, Crewe were relegated to the third tier (renamed to League One) again. Crewe Alexandra play in League Two (the fourth tier of English football) during 2009–2010 having been relegated at the end of the 2008–2009 season. The club has a reputation of developing young players through its youth ranks; in recent times the likes of Geoff Thomas, Danny Murphy, Craig Hignett, David Platt, Rob Jones, Neil Lennon and Dean Ashton have all passed through the club, whilst internationals Bruce Grobbelaar and Stan Bowles were also on the books at one time in their careers. Probably their most famous home-grown player was Frank Blunstone, born in the town in 1934, who was transferred from "The Alex" to Chelsea in 1953, and went on to win five England caps.

Crewe's local rugby clubs are both based in or near Nantwich. The Crewe & Nantwich Steamers (formerly Crewe Wolves), who play in the Rugby League Conference, are based at Barony Park, Nantwich, while Crewe and Nantwich RUFC play their home games at the Vagrants Sports Ground in Willaston.

Speedway racing was staged in Crewe in the pioneer days of the late-1920s/early-1930s. The venue was the stadium in Earle Street which also operated in the 1970s. The Crewe Kings raced in the lower division – British League Division Two, then the National League – from 1969 until 1975. At the time the track was the longest and fastest in the UK.[25] Amongst their riders were Phil Crump (father of Jason Crump), Les Collins (brother of Peter Collins), Dave Morton (brother of Chris Morton), Geoff Curtis, John Jackson, Jack Millen and Dave Parry. The stadium has since been demolished to be replaced by a retail park housing a number of national companies.