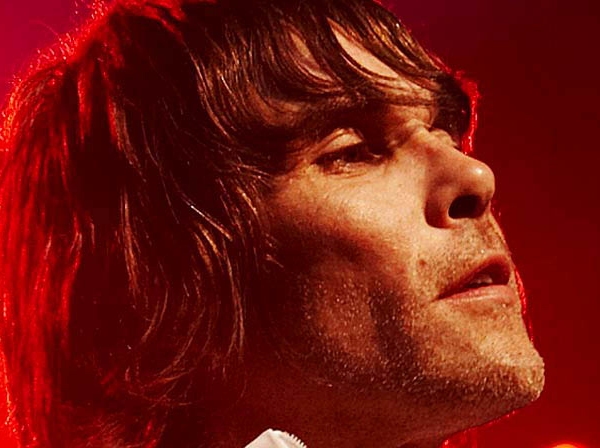 Ian George Brown (born ) is an English musician and former lead singer of the band . He is widely considered by fans to be one of the pioneering members of the scene.

Since the band's acrimonious and prolonged break up in 1996, Brown has released five solo albums and twelve UK top 40 singles. He has appeared on several club tours and has performed at the three times since 1998.

Brown is widely considered to be a very influential artist, as well as an enduring indie cult icon. His work from his early Stone Roses days, to the present day have provided inspiration for numerous hugely popular indie groups today. frontmen Liam and have cited on numerous occasions Ian's influence on the band, with Noel Gallagher recently quoting Brown's lyrics from Stone Roses track '' as 'my inspiration' for a recent poster campaign. Sheffield indie icons have also cited Brown as one of their biggest and most important influences, and have claimed that he is their "musical hero".

Brown was born in in 1963. His father, George, was a and his mother Jean worked in a paper factory. Brown's family moved when he was young and he grew up in , Greater Manchester, along with his brother and sister, as a karate-obsessed admirer of , and . He was educated at Heyes Lane Infant and Junior School and then .

His active interest in music was inspired by the originators of punk, specifically the , but also the likes of , local band and (he and original bassist attended the recording of the single "" in Manchester). The first gig Brown attended was however a gig at Bowdon Vale Youth Club in 1978.

He shared his musical interests with friend , who lived on the same street; the pair attended "all-nighters" across the north of England in the late 70s and early 80s as the scene faded. Brown joined Squire's band on bass before it evolved into , whilst was playing lead guitar at the time; they became in 1984. Around this time, Brown met one of his idols, soul legend , who told him, "You're a star. You're an actor. Be a singer."

Allegedly nicknamed "King Monkey" by 's drummer , [ [http://www.imdb.com/name/nm1497594/bio Biography] , Internet Movie Database] [ [http://www.jambase.com/Artists/Bio.aspx?ArtistID=45330 Biography] , JamBase] Brown is noted for his wispy, raspy, and throaty singing style. Particularly live, he is not the most technically sound singer; some critics have compared his delivery to "a man shouting into a bucket".Fact|date=April 2007. It is his delivery of lyrics, enormous charisma and stage presence that make him stand out.

In his solo career, Brown has worked with many notable musicians including (adding vocals to the instrumental album track "Unreal", for its release as the single "Be There" and sings the vocals on the "Reign" single, released in 2004) and Oasis' . Previously, he acted as a mentor to the up-and-coming British band, South.

Brown appeared in a cameo role in the movie adaptation of "Harry Potter and the Prisoner of Azkaban". The singer became good friends with the movie's director , who has personally promised to direct one of Brown's future music videos. Brown took only the standard extras fee of £200 for appearing in the film.

In 2002, "Q" magazine named Ian Brown in their list of the "50 Bands To See Before You Die", although this was part of a sub-list of "5 Bands That Could Go Either Way".

Brown has had several run-ins with the law. In 1998, he was sentenced to 4 months in jail for , after a threatening of a stewardess with plastic cutlery, offering to cut her hands off on a flight. This demonstration that the title of 'punk' was well-earned, resulted in a spate of "Free Ian Brown" graffiti in and around Manchester. Most of his sentence was served at Strangeways jail. In an interview with Dave Haslam he claimed "I saw more drugs in a couple of months in Strangeways than in the whole of the rest of my lifetime." [ [http://www.davehaslam.com/control.php?_command=/DISPLAY/16/8//3000&_path=/102/104 Dave Haslam, Author and DJ - Official Site ] ]

In 2005, he was arrested for assault during a gig, but no charges were brought.

He undertook a sell out UK tour in 2005, including selling out the 16,000 capacity on and visited Australia (Falls Festival, Southbound Festival, Sydney, Brisbane and Melbourne) in 2006.

Since the demise of the Roses, Brown has stayed in touch with some of the former members. He has performed with bassist Mani and remains friends with drummer Reni. Both Reni and Mani contributed to the track "" on Brown's debut album "Unfinished Monkey Business", although Reni maintains that this was in fact a drum machine and not him.

Brown has also worked with (who regularly acts as the support act at Brown's gigs), and , who all performed with the Roses on their ill-fated 1996 summer tour which included the in Spain and the now infamous performance.

In the 2006 NME awards, Brown was presented with the "Godlike Genius" award. He said that as well as his work with the Stone Roses, he considered the track "F.E.A.R." (co written with dave colquhoun/dave mccracken)to be one of his moments of genius.

In October 2006, Brown made a surprising move to headline the held outdoors in Victoria Park HK. During the two-day event and prior to his appearance on stage he strolled around anonymously and mingled with members of the crowd. His eventual stage performance was hailed by the and other local newspapers as a great success.

In September 2007, Brown released his fifth studio album, "The World Is Yours". The album represented a more political approach in his music, particularly the anti-war single, "Illegal Attacks".

On 13 June 2008, Ian was dragged from the stage by a member of the crowd whilst performing at Sheffield's Carling Academy, hitting his head on the concrete floor. He was rushed to hospital where he received 10 stitches to a head wound, but was well enough to perform at the the following night.

On 3 July 2008, Brown revealed he is working on his sixth solo album which will be set for release sometime in spring 2009.

He has won numerous awards in his career, in recognition of his work as a solo artist and his work with The Stone Roses. The awards he has won are as follow:

Ian Brown has provided infuence for many hugely popular bands. frontmen Liam and have stated on several occasions that Ian Brown is their main inspiration for their band. have cited that Brown is their 'musical hero'. Other bands influenced by / are , , , , and .

of British band , and of the British group have, in particular, have visibly been influenced by Ian's physical appearance in the days of the Stone Roses. Both have, at some stage, sported replicas of Ian Brown's characteristic long, shaggy haircut, and have worn clothing on stage in similar fashion to what Ian would have worn on tour with the Stone Roses, particularly trainers and tracksuits. Many hardcore Stone Roses fans have in the past labelled both stars as 'Ian Brown impersonators' on social networking sites and message boards due to the unmistakable resemblance at times between the three. Said of Oasis, when remarking on his initial thoughts on seeing the Stone Roses for the first time in (now defunct) Manchester club "That's what we [Oasis] want to look like" [http://www.youtube.com/watch?v=Xg3xYzX_bQs]

Brown has had no contact with his former song writing partner and childhood best friend . Brown's key reason for the band not reforming is his lack of contact with Squire along with Squire's cocaine abuse and their differing musical tastes. In a 2004 interview with , Squire went as far as branding Brown as a "tuneless knob", although this was taken out of context by some members of the press as it referred to Brown during the recording of the Stone Roses' second album, "Second Coming" due to his large in-take of cannabis.

Squire has once contacted Brown since the demise of the Roses. When Brown was in jail before Christmas 1998 for air rage, Squire sent Brown a box of (as this was the gift that they traditionally exchanged in their youth at Christmas) with a note reading "I Still Love You". Whilst Brown was released just before Christmas and did not directly contact Squire afterwards, he is said to have been touched by the gesture.

In September 2005 Ian appeared to rule out a Stone Roses reunion saying "there's more chance of me reforming the Happy Mondays than the Roses". in fact have reformed, but yet Brown appears pessimistic about a likelihood of any reunion.

In June 2007 John Squire said he wouldn't reform the Roses even if Ian Brown phoned him up personally. [ [http://www.davehaslam.com/control.php?_command=/DISPLAY/139/23 Dave Haslam, Author and DJ - Official Site ] ]

Brown and his wife , from , have one son, Emilio who is eight. The family currently resides in , , and also has a house in , a district of in the county of . He has two older sons - Frankie and Casey - from a previous relationship.

Brown has been an ardent fan since childhood [ [http://arts.guardian.co.uk/features/story/0,,1576145,00.html The unsinkable Ian Brown | Music | The Guardian ] ] [ [http://www.manutd.com/default.sps?pagegid=%7B83A644F4-1A7E-48B9-AF95-4605613A9A18%7D&newsid=353252&page=1 FANZONE - Fan News & Blogs: Fanzone Interview: Ian Brown - Manchester United Official Web Site ] ] and is also a supporter of Rugby League Club, whose majority shareholder Simon Moran organised The Stone Roses' legendary gig at Warrington night club 'Legends', as well as many of Brown's gigs since then. Brown wore a Warrington Wolves away jersey during the encore of his performance at Warrington's Parr Hall on 6th October, 2007.

Brown's music has been used frequently in the CSI television series franchises. In , Episode: 319 - A Night at the Movies, Brown's "F.E.A.R" is played when Sara is searching the warehouse and goes outside to look for evidence. In Episode: 414 - Suckers, "Set My Baby Free" is played when Nick is creating a photofit of the thief.

In , Episode 116, Evidence of Things Unseen, "Forever and a Day" is heard at end of the episode while Horatio talks to a stripper.

Listed are chart positions for the United Kingdom.