The conifers, division Pinophyta, also known as division Coniferophyta or Coniferae, are one of over 9000 division level taxa within the Kingdom Plantae. Pinophytes are gymnosperms. They are cone-bearing seed plants with vascular tissue; all extant conifers are woody plants, the great majority being trees with just a few being shrubs. Typical examples of conifers include cedars, Douglas-firs, cypresses, firs, junipers, kauris, larches, pines, hemlocks, redwoods, spruces, and yews.[1] The division contains approximately eight families, 68 genera, and 630 living species.[2][3] Although the total number of species is relatively small, conifers are of immense ecological importance. They are the dominant plants over huge areas of land,[4] most notably the boreal forests of the northern hemisphere,[1] but also in similar cool climates in mountains further south. Boreal conifers have many winter time adaptations. The narrow conical shape of northern conifers, and their downward-drooping limbs help them shed snow. Many of them seasonally alter their biochemistry to make them more resistant to freezing, called "hardening". While tropical rainforests have more biodiversity and turnover, the immense conifer forests of the world represent the largest terrestrial carbon sink, i.e. where carbon is bound as organic compounds. They are also of great economic value, primarily for timber and paper production;[1][4] the wood of conifers is known as softwood.

The earliest conifers in the fossil record date to the late Carboniferous (Pennsylvanian) period (about 300 million years ago),[5] possibly arising from Cordaites, a seed-bearing plant with cone-like fertile structures. This plant resembled the modern Araucaria. Pinophyta, Cycadophyta, and Ginkgophyta all developed at this time.[5] An important adaptation of these gymnosperms was allowing plants to live without being so dependent on water. Other adaptations are pollen (allowing fertilization to occur without water) and the seed, which allows the embryo to be transported and developed elsewhere.[5]

Conifers appear to be one of the taxa that benefitted from the Permian–Triassic extinction event.

The division name Pinophyta conforms to the rules of the ICBN, which state (Article 16.1) that the names of higher taxa in plants (above the rank of family) are either formed from the name of an included family (usually the most common and/or representative), in this case Pinaceae (the pine family), or are descriptive. In the latter case the name for the conifers (at whatever rank is chosen) is Coniferae (Art 16 Ex 2), which is also in widespread use. Older scientific names (no longer allowed) are Coniferophyta and Coniferales.

According to the ICBN it is possible to use a name formed by replacing the termination -aceae in the name of an included family, in this case preferably Pinaceae, by the appropriate termination, in the case of this division -ophyta. Alternatively, "descriptive botanical names" may also be used at any rank above family. Both are allowed.

Commonly the conifers are considered equivalent to the Gymnosperms,[4] particularly in areas with a temperate climate where they may be the only commonly occurring gymnosperms. However, these are two different levels of grouping: conifers are the largest and economically most important component group of the gymnosperms, but nevertheless they comprise only one of the four groups. The division Pinophyta consists of just one class, Pinopsida, which includes both living and fossil taxa. Subdivision of the living conifers into two or more orders has been proposed from time to time. The most commonly seen in the past was a split into two orders, Taxales (Taxaceae only) and Pinales (the rest), but recent research into DNA sequences suggests that this interpretation leaves the Pinales without Taxales as paraphyletic, and the latter order is no longer regarded as distinct. A more accurate subdivision would be to split the class into three orders, Pinales containing only Pinaceae, Araucariales containing Araucariaceae and Podocarpaceae, and Cupressales containing the remaining families (including Taxaceae), but there has not been any significant support for such a split, with the majority of opinion preferring retention of all the families within a single order Pinales, despite their antiquity and diverse morphology. 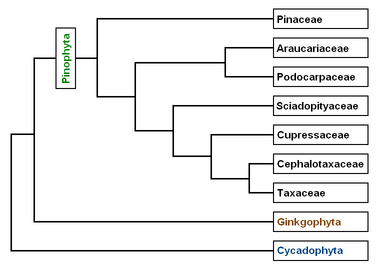 Phylogeny of the Pinophyta based on cladistic analysis of molecular data.[6]

The conifers are now accepted as comprising six to eight families, with a total of 65-70 genera and 600-630 species (696 accepted names).[2] The seven most distinct families are linked in the box above right and phylogenetic diagram left. In other interpretations, the Cephalotaxaceae may be better included within the Taxaceae, and some authors additionally recognize Phyllocladaceae as distinct from Podocarpaceae (in which it is included here). The family Taxodiaceae is here included in family Cupressaceae, but was widely recognized in the past and can still be found in many field guides.

The conifers are an ancient group, with a fossil record extending back about 300 million years to the Paleozoic in the late Carboniferous period; even many of the modern genera are recognizable from fossils 60-120 million years old. Other classes and orders, now long extinct, also occur as fossils, particularly from the late Paleozoic and Mesozoic eras. Fossil conifers included many diverse forms, the most dramatically distinct from modern conifers being some herbaceous conifers with no woody stems. Major fossil orders of conifers or conifer-like plants include the Cordaitales, Vojnovskyales, Voltziales and perhaps also the Czekanowskiales (possibly more closely related to the Ginkgophyta).

All living conifers are woody plants, and most are trees, the majority having monopodial growth form (a single, straight trunk with side branches) with strong apical dominance. Many conifers have distinctly scented resin, secreted to protect the tree against insect infestation and fungal infection of wounds. Fossilized resin hardens into amber. The size of mature conifers varies from less than one meter, to over 100 meters [7] The world's tallest, largest, thickest and oldest living things are all conifers. The tallest is a Coast Redwood (Sequoia sempervirens), with a height of 115.55 meters (although one Victorian mountain ash, Eucalyptus regnans, reportedly grew to a height of 140 meters).[citation needed] The largest is a Giant Sequoia (Sequoiadendron giganteum), with a volume 1486.9 cubic meters .[8] The thickest, or tree with the greatest trunk diameter, is a Montezuma Cypress (Taxodium mucronatum), 11.42 meters in diameter. The oldest is a Great Basin Bristlecone Pine (Pinus longaeva), 4,700 years old.[9] 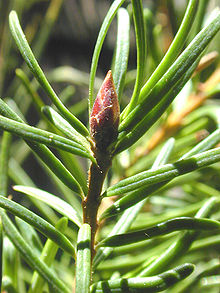 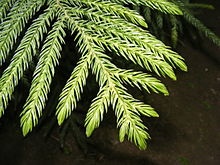 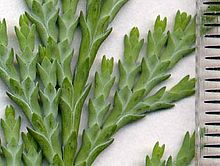 Since most conifers are evergreens,[1] the leaves of many conifers are long, thin and have a needle-like appearance, but others, including most of the Cupressaceae and some of the Podocarpaceae, have flat, triangular scale-like leaves. Some, notably Agathis in Araucariaceae and Nageia in Podocarpaceae, have broad, flat strap-shaped leaves. Others such as Araucaria columnaris have leaves that are awl-shaped. In the majority of conifers, the leaves are arranged spirally, exceptions being most of Cupressaceae and one genus in Podocarpaceae, where they are arranged in decussate opposite pairs or whorls of 3 (-4). In many species with spirally arranged leaves, the leaf bases are twisted to present the leaves in a very flat plane for maximum light capture (see e.g. photo of Grand Fir Abies grandis). Leaf size varies from 2 mm in many scale-leaved species, up to 400 mm long in the needles of some pines (e.g. Apache Pine Pinus engelmannii). The stomata are in lines or patches on the leaves, and can be closed when it is very dry or cold. The leaves are often dark green in colour which may help absorb a maximum of energy from weak sunshine at high latitudes or under forest canopy shade. Conifers from hotter areas with high sunlight levels (e.g. Turkish Pine Pinus brutia) often have yellower-green leaves, while others (e.g. Blue Spruce Picea pungens) have a very strong glaucous wax bloom to reflect ultraviolet light. In the great majority of genera the leaves are evergreen, usually remaining on the plant for several (2-40) years before falling, but five genera (Larix, Pseudolarix, Glyptostrobus, Metasequoia and Taxodium) are deciduous, shedding the leaves in autumn and leafless through the winter.[1] The seedlings of many conifers, including most of the Cupressaceae, and Pinus in Pinaceae, have a distinct juvenile foliage period where the leaves are different, often markedly so, from the typical adult leaves. 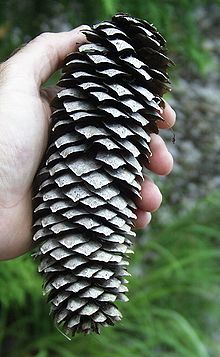 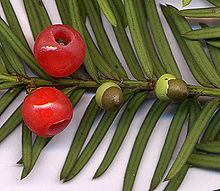 Taxaceae: the fleshy aril which surrounds each seed in the European Yew(Taxus baccata) is a highly modified seed cone scale 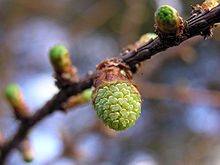 Most conifers are monoecious, but some are subdioecious or dioecious; all are wind-pollinated.[4] Conifer seeds develop inside a protective cone called a strobilus. The cones take from four months to three years to reach maturity, and vary in size from 2 mm to 600 mm long.

In Pinaceae, Araucariaceae, Sciadopityaceae and most Cupressaceae, the cones are woody, and when mature the scales usually spread open allowing the seeds to fall out and be dispersed by the wind. In some (e.g. firs and cedars), the cones disintegrate to release the seeds, and in others (e.g. the pines that produce pine nuts) the nut-like seeds are dispersed by birds (mainly nutcrackers and jays) which break up the specially adapted softer cones. Ripe cones may remain on the plant for a varied amount of time before falling to the ground; in some fire-adapted pines, the seeds may be stored in closed cones for up to 60–80 years, being released only when a fire kills the parent tree.

In the families Podocarpaceae, Cephalotaxaceae, Taxaceae, and one Cupressaceae genus (Juniperus), the scales are soft, fleshy, sweet and brightly colored, and are eaten by fruit-eating birds, which then pass the seeds in their droppings. These fleshy scales are (except in Juniperus) known as arils. In some of these conifers (e.g. most Podocarpaceae), the cone consists of several fused scales, while in others (e.g. Taxaceae), the cone is reduced to just one seed scale or (e.g. Cephalotaxaceae) the several scales of a cone develop into individual arils, giving the appearance of a cluster of berries.

The male cones have structures called microsporangia which produce yellowish pollen through meiosis. Pollen is released and carried by the wind to female cones. Pollen grains from living pinophyte species produce pollen tubes, much like those of angiosperms. When a pollen grain lands near a female gametophyte, it undergoes fertilization of the female gametophyte. Alternatively, the gymnosperm male gametophytes are carried by wind to a female cone and are drawn into a tiny opening on the ovule called the micropyle. It is within the ovule that germination occurs. From here, a pollen tube seeks out the female gametophyte and if successful, fertilization will occur. In both cases, the resulting zygote develops into an embryo, which along with its surrounding integument, becomes a seed. Eventually the seed may fall to the ground and, if conditions permit, grows into a new plant.

In forestry, the terminology of flowering plants has commonly though inaccurately been applied to cone-bearing trees as well. The male cone and unfertilized female cone are called "male flower" and "female flower", respectively. After fertilization, the female cone is termed "fruit", which undergoes "ripening" (maturation).

A number of conifers have become invasive species in parts of New Zealand. These "wilding conifers" are a serious environmental issue causing problems for pastoral farming and for conservation.[10]