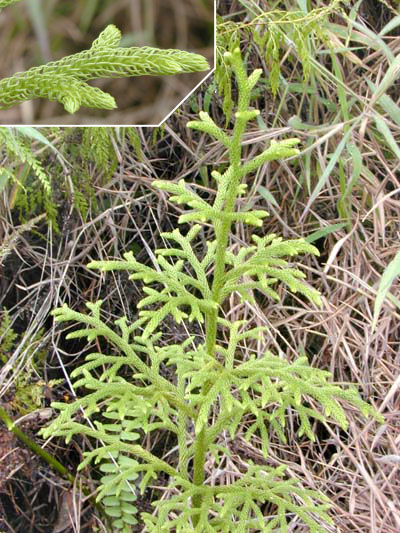 The Division Lycopodiophyta (sometimes called Lycophyta) is a tracheophyte subdivision of the Kingdom ae. It is the oldest extant (living) division at around 420 million years old,Fact|date=February 2008 and includes some of the most "primitive" extant species. These species reproduce by shedding s and have macroscopic , although some are while others are . They differ from all other vascular plants in having s, leaves that have only a single vascular trace (vein) rather than the much more complex megaphylls found in s and .

The members of this division have a long evolutionary history, and s are abundant worldwide, especially in coal . In fact, most known genera are extinct. The species "" represents the earliest identifable Lycopodiophyta, while some "" seem to be related.

Fossils ascribed to the Lycopodiophyta first appear in the Silurian period, along with a number of other vascular plants. Phylogenetic analysis places them at the base of the vascular plants; they are distinguished by their s and by transverse dehiscence of their sporangia (as contrasted with longitudinal in other vascular plants). Sporangia of living species are borne on the upper surfaces of microphylls (called s). In some groups, these sporophylls are clustered into strobili.

During the period, tree-like Lycopodiophyta (such as "") formed huge forests and dominated the land. Unlike modern trees, leaves grew out of the entire surface of the trunk and branches, but would fall off as the plant grew, leaving only a small cluster of leaves at the top. Their remains formed many fossil deposits. In Fossil Park, , , fossilized Lycopodiophyta trees can be found in . The trees are marked with diamond-shaped scars where they once had leaves. The spores of Lycopodiophyta are highly flammable and so have been used in .