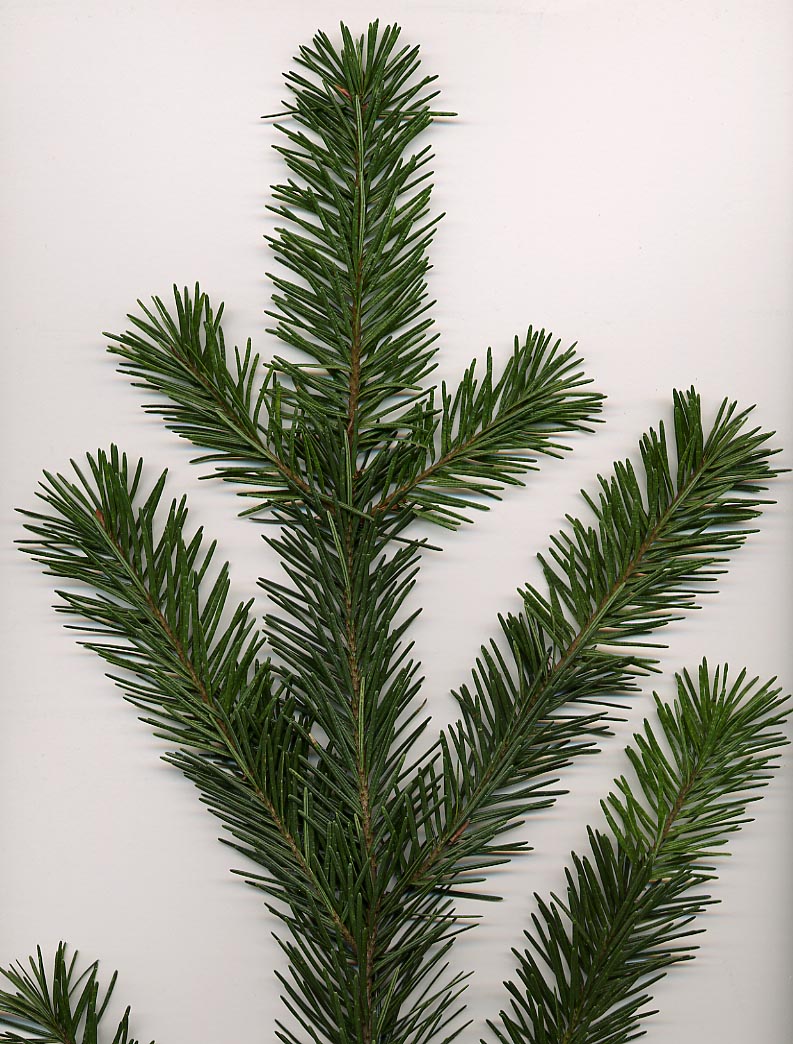 The Coast Douglas-fir ("Pseudotsuga menziesii" var. "menziesii"), a variety of , is an native to the coastal regions of western , from west-central , southward to central , . In and its range is continuous from the Cascades crest west to the . In California, it is found in the Klamath and Coast Ranges as far south as the , and in the Sierra Nevada as far south as the Yosemite region. It occurs from near sea level along the coast to 1,800 m (6,000 ft) in the Sierra Nevada. Further inland, Coast Douglas-fir is replaced by the related ("Pseudotsuga menziesii" var. "glauca").

The on young trees is thin, smooth, gray, and contains numerous resin blisters. On mature trees, it is 10-30 cm thick (4-12 inches) and corky. The shoots are brown to olive-green, turning gray-brown with age, smooth, though not as smooth as shoots, and finely pubescent with short dark hairs. The s are a very distinctive narrow conic shape, 4-8 mm long, with red-brown bud scales. The leaves are spirally arranged but slightly twisted at the base to lie in flattish either side of the shoot, needle-like, 2-3.5 cm long, green above with no , and with two whitish stomatal bands below. Unlike the Rocky Mountain Douglas-fir, Coast Douglas-fir foliage has a noticeable sweet fruity-resinous scent, particularly if crushed.

In conditions, old individuals typically have a narrow, cylindric crown beginning 20-40 m (65-130 feet) above a branch-free trunk. Self-pruning is generally slow and trees retain their lower limbs for a long period. Young, open-grown trees typically have branches down to near ground level. It often takes 70-80 years for the trunk to be clear to a height of 5 m (17 ft) and 100 years to be clear to a height of 10 m (33 ft). Appreciable seed production begins at 20-30 years in open-grown Coast Douglas-fir. Seed production is irregular; over a 5-7 year period, stands usually produce one heavy crop, a few light or medium crops, and one crop failure. Even during heavy seed crop years, only about 25 percent of trees in closed stands produce an appreciable number of cones. Each cone contains around 25 to 50 seeds. Seed size varies; average number of cleaned seeds varies from 70-88/g (32,000-40,000 per pound). Seeds from the northern portion of Coast Douglas-fir's range tend to be larger than seed from the south.

Coast Douglas-fir is the dominant tree in the , occurring in nearly all forest types, competes well on most parent materials, aspects, and slopes. Adapted to a moist, mild climate, it grows larger and faster than . Associated trees include , , , , , , , California Incense-cedar, Lawson's Cypress, , and several others. Pure stands are also common, particularly north of the in Oregon. associates in the central and northern part of Coast Douglas-fir's range include ("Acer circinatum"), ("Gaultheria shallon"), Pacific ("Rhododendron macrophyllum"), ("Mahonia aquifolium"), ("Vaccinium parvifolium"), and ("Rubus spectabilis"). In the drier, southern portion of its range shrub associates include California Hazel ("Corylus cornuta" var. "californica"), ("Holodiscus discolor"), Creeping Snowberry ("Symphoricarpos mollis"), Western Poison-oak (""), ("Ceanothus" spp.), and ("Arctospaphylos" spp.). In wet coastal forests, nearly every surface of old-growth Coast Douglas-fir is covered by epiphytic es and s. It is sometimes parasitized by the Douglas-fir Dwarf Mistletoe. The ing habit of Coast Douglas-fir is not particularly deep, with the roots tending to be shallower than those of same-aged Ponderosa Pine, Sugar Pine, or California Incense-cedar, though deeper than Sitka Spruce. Some roots are commonly found in organic soil layers or near the mineral soil surface.

Mature or "old-growth" Coast Douglas-fir is the primary habitat of the and the . Home range requirements for breeding pairs of spotted owls are at least 400 ha (4 km² / 1,000 acres) of old-growth. Red tree voles may also be found in immature forests if Douglas-fir is a significant component. This animal nests almost exclusively in the foliage of Douglas-fir trees. Nests are located 2-50 m (6-160 feet) above the ground. The red vole's diet consists chiefly of Coast Douglas-fir needles.

In many areas Coast Douglas-fir needles are a staple in the spring diet of . In the winter, s primarily eat the inner bark of young conifers, especially Douglas-fir. Douglas-fir snags are abundant in forests older than 100-150 years and provide cavity-nesting habitat for numerous forest birds.

The leaves are also used by the "Adelges cooleyi"; this 0.5 mm long sap-sucking is conspicuous on the undersides of the leaves by the small white "fluff spots" of protective wax that it produces. It is often present in large numbers, and can cause the foliage to turn yellowish from the damage in causes. Exceptionally, trees may be partially defoliated by it, but the damage is rarely this severe.

The shade-intolerance of Douglas-fir plays a large role in the forest of lowland old growth communities of the Pacific Northwest. While mature stands of lowland old-growth forests contain many Western Hemlock ("Tsuga heterophylla") seedlings, and some ("Thuja plicata") seedlings, Douglas-fir dominated stands contain almost no Douglas-fir seedlings. This seeming contradiction occurs because Douglas-firs are intolerant of shade and rarely survive for long within the shaded understory.

When a tree dies in a mature the canopy opens up and sunlight becomes available as a source of energy for new growth. The shade-tolerant Western Hemlock seedlings that sprout beneath the canopy have a head-start on other seedlings. This competitive advantage allows the to grow rapidly into the sunlight, while other s still struggle to emerge from the soil. The boughs of the growing Western Hemlock limit the sunlight for smaller trees and severely limit the chances of shade-intolerant trees, such as the Douglas-fir. Over the course of centuries, Western Hemlock typically come to dominate the of an old-growth lowland forest.

Douglas-firs are pioneer trees, and possess thicker bark and a somewhat faster growth rate than other climax trees of the area, such as the and . This quality often gives Douglas-firs a competitive advantage when the forest experiences a major disturbance such as fire. Periodically, portions of a lowland forest may be burned by wildfire, may be logged, or may be blown down by a wind-storm. These types of disturbances often create conditions where Douglas-firs have an advantage over less drought and fire-tolerant species.

s dominate the climax forests of the Coastal Douglas-fir. All of the climax conifers that grow alongside Douglas-fir can live for centuries, with a few species capable of living for over a millennium. Forests that exist on this time scale experiences the type of sporadic disturbances that allow mature stands of Douglas-firs to establish themselves as a persistent element within a mature old-growth . When s survive in a natural state, they often look like a patchwork quilt of different forest communities. typically dominate old growth forests, but contain sections of Douglas-firs, Redcedar, , and even Redwood forests on their southern extent, near the Oregon and California border.

The logging practices of the last 200 years created artificial disturbances that caused Douglas-firs to thrive. The Douglas-fir's useful wood and its quick growth make it the crop of choice for many timber companies, which typically replant a clear-cut area with Douglas-fir saplings. The low-moisture conditions that exist within a clear-cut also naturally favor the regeneration of Douglas-fir. Because of clear-cut logging, almost all the Pacific Northwest forests not strictly set aside for protection are today dominated by Douglas-fir, while the normally dominant climax species, such as and are relatively rare.

Coast Douglas-fir is one of the worlds best timber producers and yields more timber than any other tree in North America. The wood is used for dimensional lumber, timbers, pilings, and . treated pilings and decking are used in marine structures. The wood is also made into railroad ties, mine timbers, house logs, posts and poles, flooring, veneer, pulp, and furniture. Coast Douglas-fir is used extensively in landscaping. It is planted as a specimen tree or in mass screenings. It is also a popular .

Douglas Firs became an iconic symbol in the television series and later on, .
The "Doug Fir" is also the name of a popular concert venue in Portland, OR.
The 'Doug flag', the popularly proposed flag of the Cascadian Independence movement incorporates the Douglas fir as a central part.