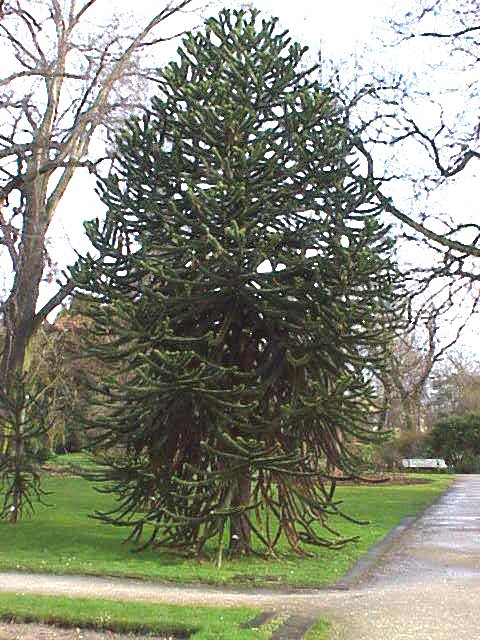 The Araucariaceae are a very ancient family of s. They achieved maximum diversity in the and periods, when they existed almost worldwide. At the end of the Cretaceous, when dinosaurs became extinct, so too did the Araucariaceae in the northern hemisphere.

There are three genera with 41 species alive today, "", "" and "", all derived from the and distributed largely in the . By far the greatest diversity is in (18 species), with others in southern , , and , where "Agathis" extends a short distance into the , reaching 18°N in the . All are s, typically with a single stout trunk and very regular whorls of branches, giving them a formal appearance. Several are very popular ornamental trees in s in subtropical regions, and some are also very important trees, producing of high quality. Several have edible seeds similar to s, and others produce valuable and . In the s where they occur, they are usually dominant trees, often the largest species in the forest; the largest is "Araucaria hunsteinii", reported to 89 m tall in , with several other species reaching 50-65 m tall.

The of the famous east of are Araucariaceae. During the Upper (Late) Triassic the region was moist and mild. The trees washed from where they grew in seasonal flooding and accumulated on sandy delta mudflats, where they were buried by silt and periodically by layers of volcanic ash which mineralized the wood. The fossil trees belong generally to three species of Araucariaceae, the most common of them being "". Some of the segments of trunk represent giant trees that are estimated to have been over 50 meters tall when they were alive.