Unlike synonyms in other contexts, in taxonomy a synonym is not interchangeable with the name that it is a synonym of. In taxonomy synonyms are not equals, but have a different status. In general, for any taxon (with a particular circumscription, position and rank) only one scientific name is considered to be the correct one at any given time (this correct name is determined by applying the relevant Code of Nomenclature). A synonym is always the synonym of a different scientific name and cannot exist in isolation.

Synonyms may arise whenever the same taxon is described and named more than once, independently. They may also arise whenever existing taxa are changed, as when a species is moved to a different genus, or two genera are joined to become one, etc.

To the general user of scientific names, for example in agriculture, horticulture, ecology, general science, etc, a synonym is a name that used to be in the handbooks as the correct scientific name but that is no longer being used, having been displaced by another scientific name, which is now correct. In handbooks and general texts, it is very convenient to have synonyms mentioned as such, after the current scientific name, so as to avoid confusion. For example, if the much advertised name change should go through and the current name of the fruit fly would be changed to Sophophora melanogaster, it would be very helpful if any mention of this name is accompanied by "(syn. Drosophila melanogaster)".

Such name changes may have two causes: they may be taxonomic or nomenclatural. A name change may be caused for taxonomic reasons, when the circumscription, position or rank of a taxon is changed, representing a change in taxonomic, scientific insight (as would be the case for the fruit fly, mentioned above). A name change may be caused for nomenclatural reasons, that is, based on the rules of nomenclature, like when an older name is (re)discovered which has priority over the current name. Speaking in general, name changes for nomenclatural reasons have become less frequent over time as the rules of nomenclature allow for countermeasures, so as to promote stability of scientific names. 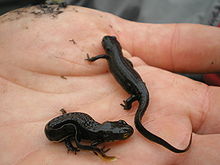 The Latin Caudata and Greek Urodela both mean "tailed" and have been used as a scientific name at the rank of order for the salamanders (as opposed to the tail-less frogs). Thus they are synonyms.

In zoological nomenclature, codified in the International Code of Zoological Nomenclature, synonyms are different scientific names of the same rank that pertain to the same taxon, for example two names for the same species. The earliest such name is called the senior synonym, while the later names are junior synonyms. One basic principle of zoological nomenclature is that the earliest correctly published (and thus available) name, the senior synonym, takes precedence and must be used for the taxon, if no other restrictions interfere. Synonyms are important because if the earliest name cannot be used (for example because the same spelling had previously been used for a name established for another taxon), then the next available junior synonym must be used for the taxon.

Objective synonyms are common at the level of genera, because for various reasons two genera may contain the same type species; these are objective synonyms.[5] In many cases researchers established new generic names because they thought this was necessary or did not know that others had previously established another genus for the same group of species. An example is the genus Pomatia Beck, 1837,[6] which was established for a group of terrestrial snails containing as its type species the Burgundy or Roman snail Helix pomatia – since Helix pomatia was already the type species for the genus Helix Linnaeus, 1758, the genus Pomatia was an objective synonym (and useless). At the same occasion Helix is also a synonym of Pomatia, but it is older and so it has precedence.

It is possible for a junior synonym to be given precedence over a senior synonym,[7] primarily when the senior name has not been used since 1899, and the junior name is in common use. The older name may be declared to be a nomen oblitum, and the junior name declared a nomen protectum. This rule exists primarily to prevent the confusion that would result if a well-known name, with a large accompanying body of literature, were to be replaced by a completely unfamiliar name. An example is the European land snail Petasina edentula (Draparnaud, 1805). In 2002, researchers found that an older name Helix depilata Draparnaud, 1801 referred to the same species, but this name had never been used after 1899 and was fixed as a nomen oblitum under this rule by Falkner et al. 2002.[8]

Such a reversal of precedence is also possible if the senior synonym was established after 1900, but only if the International Commission on Zoological Nomenclature (ICZN) approves an application. For example, the scientific name of the red imported fire ant, Solenopsis invicta was published by Buren in 1972, who did not know that this species was first named Solenopsis saevissima wagneri by Santschi in 1916; as there were thousands of publications using the name invicta before anyone discovered the synonymy, the ICZN, in 2001, ruled that invicta would be given precedence over wagneri.

To qualify as a synonym in zoology, a name must be properly published in accordance with the rules. Manuscript names and names that were mentioned without any description (nomina nuda) are not considered as synonyms in zoological nomenclature.

The common dandelion Taraxacum officinale sensu lato is an extremely widespread group of apomictic lineages, and some scientists apply the "biological species concept" to divide it into many distinct species; other scientists regard all the names for those independent species as synonyms.

In botanical nomenclature, a synonym is a name that is not correct for the circumscription, position, and rank of the taxon as considered in the particular botanical publication. It is always "a synonym of the correct scientific name", but which name is correct depends on the taxonomic opinion of the author. In botany the various kinds of synonyms are:

In botany, a name treated as a synonym does not have to be a valid name: a listing of synonyms often contains names that for some reason did not make it as a formal name (unpublished or manuscript names (invalid names), names that were validly published but did not fulfill all the requirements of the code of nomenclature (illegitimate names)). Such a synonym must have the form of a formal name: it must look like a proper 'Latin name'.

Comparison between zoology and botany

Although the basic principles are fairly similar, the treatment of synonyms in botanical nomenclature differs in detail and terminology from zoological nomenclature, where the correct name is included among synonyms, although as first among equals it is the "senior synonym":

Scientific papers may include lists of taxa, synonymizing existing taxa and listing references to them. The status of a synonym may be indicated by symbols, as for instance in a system proposed for use in palaeontology by Rudolf Richter. In that system a v before the year would indicate that the authors have inspected the original material; a . that they take on the responsibility for the act of synonymizing the taxa.[9]

The traditional concept of synonymy is often expanded in taxonomic literature to include "pro parte" (or "for part") synonyms. These are caused by splits and circumscriptional changes. They are usually indicated by the abbreviation "p.p."[10] For example: