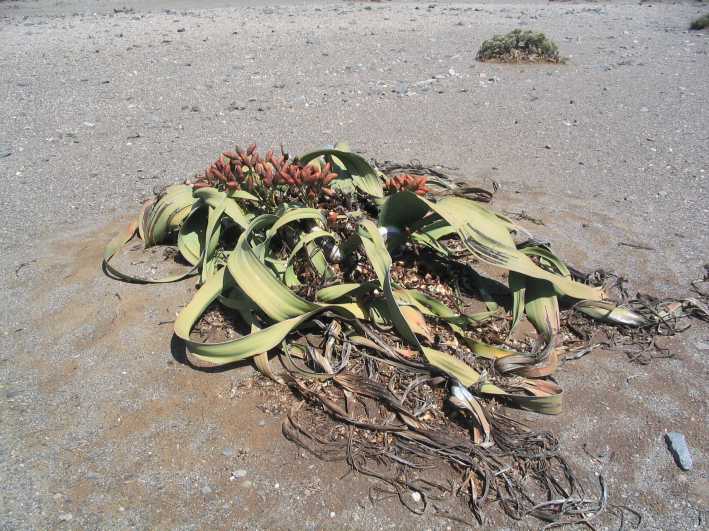 The division Gnetophyta or gnetophytes comprise three related families of s grouped in the s. The gnetophytes differ from other gymnosperms in having s as in the s (Angiosperms or Magnoliophytes).

"" species are mostly y climbers in tropical forests. However, the most well-known member of this group, "", is a tree. Its seeds are used to produce a crispy "" snack known as "emping" or "krupuk belinjo".

"" comprises only one species, "Welwitschia mirabilis". It grows only in the deserts of and . The plant is strange in having only two large strap-like leaves for all its life. These grow continuously from the base, and are usually tattered at the ends by flapping in the winds.

Plants of the genus "Ephedra" are known as jointfirs because they have long slender branches which bear tiny scale-like leaves at their nodes. "Ephedra" has been traditionally used as a , but is a today in many jurisdictions because of the risk of harmful or even fatal overdosing.

In some classifications all three genera are placed in a single order (Gnetales) but in others distributed among three orders, each containing a single family and genus.

"Gnetum" and "Welwitschia" diverged from each other more recently than from "Ephedra".

Molecular phylogenies of extant gymnosperms have conflicted with morphological characters with regard to whether the gymnosperms as a whole (including gnetophytes) comprise a or a one that gave rise to angiosperms. At issue is whether the Gnetophyta are the of , or whether they are sister to, or nested within, other extant gymnosperms. Numerous fossil gymnosperm clades once existed that are morphologically at least as distinctive as the four living groups, such as , "Caytonia" and the glossopterids. When these gymnosperm fossils are considered the question of gnetophyte relationships to other seed plants becomes even more complicated.