The Cupressaceae or cypress family is a conifer family with worldwide distribution. The family includes 27 to 30 genera (17 monotypic), which include the junipers and redwoods, with about 130-140 species in total. They are monoecious, subdioecious or (rarely) dioecious trees and shrubs from 1-116 m (3-379 ft) tall. The bark of mature trees is commonly orange- to red- brown and of stringy texture, often flaking or peeling in vertical strips, but smooth, scaly or hard and square-cracked in some species. 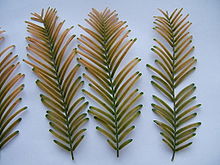 The leaves are arranged either spirally, in decussate pairs (opposite pairs, each pair at 90° to the previous pair) or in decussate whorls of 3 or 4, depending on the genus. On young plants, the leaves are needle-like, becoming small and scale-like on mature plants of many (but not all) genera; some genera and species retain needle-like leaves throughout their life. Old leaves are mostly not shed individually, but in small sprays of foliage (cladoptosis); exceptions are the leaves on shoots, which develop into branches, which eventually fall off individually when the bark starts to flake. Most are evergreen with the leaves persisting 2–10 years, but three genera (Glyptostrobus, Metasequoia, Taxodium) are deciduous or include deciduous species. 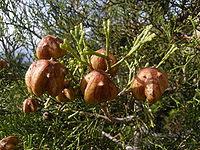 The seed cones are either woody, leathery, or (in Juniperus) berry-like and fleshy, with one to several ovules per scale. The bract scale and ovuliferous scale are fused together except at the apex, where the bract scale is often visible as a short spine (often called an umbo) on the ovuliferous scale. As with the foliage, the cone scales are arranged spirally, decussate (opposite) or whorled, depending on the genus. The seeds are mostly small and somewhat flattened, with two narrow wings, one down each side of the seed; rarely (e.g. Actinostrobus) triangular in section with three wings; in some genera (e.g. Glyptostrobus, Libocedrus) one of the wings is significantly larger than the other, and in some others (e.g. Juniperus, Microbiota, Platycladus, Taxodium) the seed is larger and wingless. The seedlings usually have two cotyledons, but in some species up to six. The pollen cones are more uniform in structure across the family, 1-20 mm long, with the scales again arranged spirally, decussate (opposite) or whorled, depending on the genus; they may be borne singly at the apex of a shoot (most genera), in the leaf axils (Cryptomeria), in dense clusters (Cunninghamia; Juniperus drupacea), or on discrete long pendulous panicle-like shoots (Metasequoia, Taxodium).

Cupressaceae is the most widely distributed conifer family, with a near-global range in all continents except for Antarctica, stretching from 71°N in arctic Norway (Juniperus communis) south to 55°S in southernmost Chile (Pilgerodendron uviferum), while Juniperus indica reaches 5200 m altitude in Tibet, the highest altitude reported for any woody plant. Most habitats on land are occupied, with the exceptions of polar tundra and tropical lowland rainforest (though several species are important components of temperate rainforests and tropical highland cloud forests); they are also rare in deserts, with only a few species able to tolerate severe drought, notably Cupressus dupreziana in the central Sahara. Despite the wide overall distribution, many genera and species show very restricted relictual distributions, and many are endangered species.

Phylogeny of the family Cupressaceae (Callitropsis is missing.)

The family Cupressaceae is divided into seven subfamilies, based on genetic and morphological analysis (Gadek et al. 2000, Farjon 2005): 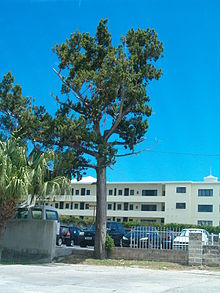 Juniperus bermudiana was the key to Bermuda's shipbuilding industry, and used in building houses, and in furniture. It also comprised the habitat for other endemic and native species, and provided Bermudians with shelter from wind and sun.

Many of the species are important timber sources, especially in the genera Calocedrus, Chamaecyparis, Cryptomeria, Cunninghamia, Cupressus, Sequoia, Taxodium, and Thuja. These and several other genera are also important in horticulture. Junipers are among the most important evergreen shrubs, groundcovers and small evergreen trees, with hundreds of cultivars selected, including plants with blue, grey, or yellow foliage. Chamaecyparis and Thuja also provide hundreds of dwarf cultivars as well as trees, including Lawson's Cypress and the infamous hybrid Leyland Cypress. Dawn Redwood is widely planted as an ornamental tree because of its excellent horticultural qualities, rapid growth and status as a living fossil. Giant Sequoia is a popular ornamental tree and is occasionally grown for timber. Giant Sequoia, Leyland Cypress, and Arizona Cypress are grown to a small extent as Christmas trees.

Sugi (Cryptomeria japonica) is the national tree of Japan, and Ahuehuete (Taxodium mucronatum) the national tree of Mexico. Coast Redwood and Giant Sequoia were jointly designated the state tree of California and are famous California tourist attractions. Redwood National and State Parks and several parks including Giant Sequoia National Monument protect almost half the remaining stands of Coast Redwoods and Giant Sequoias. Bald Cypress is the state tree of Louisiana. Bald Cypress, often festooned with Spanish moss, of Southern swamps are another tourist attraction. They can be seen at Big Cypress National Preserve in Florida. Bald Cypress "knees" are often sold as knick knacks, made into lamps or carved to make folk art. Monterey Cypress is another famous picturesque tree often visited by tourists and photographers.

Baton Rouge, Louisiana ("red stick") was named after the decay-resistant red wood of Juniperus virginiana, used by Native Americans in the region for waymarking. Its heartwood is fragrant and used in clothes chests, drawers and closets to repel moths. It is a source of juniper oil used in perfumes and medicines. The wood is also used as long lasting fenceposts and for bows. The fleshy cones of Juniperus communis are used to flavour gin.

Calocedrus decurrens is the main wood used to make wooden pencils and is also used for cupboards and chests. Native Americans and early European explorers used Thuja leaves as a cure for scurvy. Distillation of Fokienia roots produces an essential oil used in medicine and cosmetics.

The pollen of many genera of Cupressaceae is allergenic, causing major hay fever problems in areas where they are abundant, most notably with Sugi in Japan.

Several genera are an alternate host of Gymnosporangium rust, which damages apples and other related trees in the subfamily Maloideae.