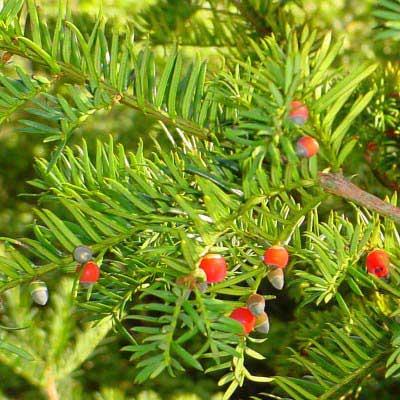 The family Taxaceae, commonly called the yew family, includes three genera and about 7 to 12 species of ous s, or in other interpretations (see Classification, below), six genera and about 30 species.

They are much branched, small s and s. The leaves are , spirally arranged, often twisted at the base to appear 2-ranked. They are linear to lanceolate, and have pale green or white stomatal bands on the undersides. The plants are dioecious, rarely monoecious. The male cones are 2-5 mm long, and shed in the early spring. The female cones are highly reduced, with just one ovuliferous scale and one seed. As the seed matures, the ovuliferous scale develops into a fleshy partly enclosing the seed. The mature aril is brightly coloured, soft, juicy and sweet, and is eaten by s which then disperse the hard seed undamaged in their droppings.

The Taxaceae is now generally included with all other conifers in the order , as analysis has shown that the yews are monophyletic with the other families in the Pinales (Chase "et al"., 1993; Price, 2003), a conclusion supported by studies (Anderson & Owens, 2003). Formerly they were often treated as distinct from other conifers by placing them in a separate order .

The genera "Torreya" and "Amentotaxus", previously included in this family, are better transferred to the , as genetic tests show they are more closely related to "Cephalotaxus" than to "Taxus". Alternatively, they may be included, with "Cephalotaxus", in a broader interpretation of Taxaceae as a single larger family (Price, 2003). In this sense, the Taxaceae includes six genera and about 30 species.

The differences between the Taxaceae and the Cephalotaxaceae are as follows:

A few botanists have transferred "Austrotaxus" to its own family, the Austrotaxaceae, suggesting it may be closer to the than to the other Taxaceae, but genetic evidence does not support this transfer.