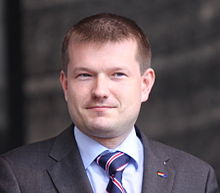 Martin Kastler (* June 18th 1974 in Nuremberg) is a German politician of the CSU and member of the European Parliament.

After attending the Martin-Behaim-Gymnasium in Nuremberg Kastler studied History and Political Sciences in Erlangen and Prague. From 1996 to 1997 he gathered experience in the field of European policy as an employee in the Foreign Policy Department of the President of the Czech Republic, Václav Havel. Thereafter, Kastler became press spokesman for the Nuremberg Metropole region and editor for DATEV. Since 1996 Kastler works freelance as a journalist and publicist. From 2004 until his re-entrance into the European Parliament in December 2008 he was head of the Development Policy Department and Coordinator for EU-Projects for the Hanns Seidel Foundation.

Martin Kastler is married, has two children and lives in Schwabach.

For the first time Martin Kastler took his seat in European Parliament for the CSU from 2003 to 2004 as successor of Emilia Müller who was called to government by the former Minister-president of Bavaria, Edmund Stoiber. After the Bavarian regional elections in September 2008 Kastler succeeded Alexander Radwan. At the European elections 2009 Martin Kastler was elected for Member of the European Parliament for the whole legislative period 2009-2014.

Kastler is member of the parliamentarian group of "Europa Union".

Martin Kastler is Chairman of the Sudeten German-Czech 'Ackermann Gemeinde', Former Scholar of Hanns Seidel Foundation, member of the Malteser emergency service, member of 'Christdemokraten für das Leben', District Chairman and Board member of the 'Pan-Europa Union', member of the Görres Society, member of the local history club of Schwabach and circumstances and founding member of the Catholic Mission Circle 'Schwabach Theresienverein e.V.'.

In 1999 Kastler acquired the Czech Language Certificate. Occasionally, Kastler plays the organ in the area of Nuremberg, having played regularly in a Nuremberg parish for a longer period of time.

Martin Kastler is initiator of the First European Citizens' Initiative whose aim it is to protect the Sunday Europe-wide as a day of rest. To that end, he presented the Online-Campagneportal "Mum and Dad belong to us on Sunday!" on February 10, 2010 at the European Parliament in Strasbourg.

Kastler shares the conviction that the Sunday needs to be protected as work-free day of family and rest in order that children do not run the risk of suffering most from today's flexibilisation of our business world anymore. The key to a successful protection of children is giving parents time for their children. Thus, the introduction of a work-free Sunday contributes to turning Europe into the world's most child-oriented area. Besides, Kastler hints at the historical entrenchment of the work-free Sunday in the European social welfare net as well as at the proven advantages of a free weekday on health.

Up to now, Kastler can rejoice at the support of the 'Verband der Katholiken in Wirtschaft und Verwaltung' (KKV), the 'Bonifatiuswerk' as well as the 'Ackermann Gemeinde'.