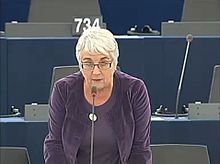 Nicole Kiil-Nielsen (born 21 August 1949, in Larchamp) is a French politician and Member of the European Parliament elected in the 2009 European election for the West France constituency. She is a member of The Greens.

She has been a feminist and anti-nuclear activist since the 1960s. She won her first elected office in the 2001 municipal elections in Rennes as a candidate on Edmond Hervé's winning left-wing coalition list. She became assistant to the Mayor in charge of decentralized co-operation and international solidarity. However, in the 2008 municipal elections, she did not join Daniel Delaveau's left-wing union list and led her own list, Rennes verte et solidaire, which won 8.93% in the first round and did not participate in the runoff.[1]

In the 2009 European elections, she was the second candidate on the Europe Écologie list in the West region and was elected to the European Parliament.