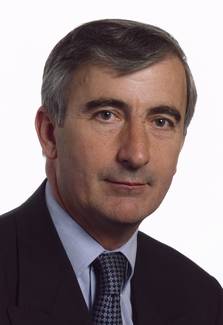 Gabriel "Gay" Mitchell (Irish: "Gabriel Ó Maoilmhíchil") (born 30 December 1951 in ) is an Irish politician and for since 2004. He is a member of , part of the , and a former for Dublin South Central from 1981–2007.__TOC__Gay Mitchell was born in , in 1951. He was educated at St. Michael's Christian Brothers School, Emmet Road Vocational School, College of Commerce and .

Mitchell first became involved in politics in 1979 as a member of . He was first elected to as TD at the 1981 general election for the Dublin South Central constituency. Since then he has served as a Minister of State at the and the Department of Foreign Affairs with special responsibility for European Affairs. He was the Irish Representative on the Reflection Group which prepared the .

Following 's resignation as Fine Gael leader in 2002, Mitchell was a challenger in the subsequent leadership election, losing out to the victor, . Before his election to the , Mitchell had been party spokesperson on Foreign Affairs, writing the party's "Beyond Neutrality" policy document. In November 2006, Mitchell announced that he had taken the difficult decision not to contest the 2007 general election and concentrate on his European seat. [ [http://www.rte.ie/news/2006/1124/tds.html Fox & Mitchell not standing in election] &ndash; "" article, 24 November 2006.]

Mitchel is a Vice Chair of the .

His late brother Jim was a long-serving TD and former government minister.

During the 2008 referendum on the , Mr. Mitchell supported the Yes campaign and was Fine Gael's director of elections for the referendum. He was widely praised for the role he played in the Lisbon campaign.