The constituency was created in 1979 for the first direct elections to the European Parliament. From 1979 to 2004, it elected 4 MEPs; this was reduced to 3 for the 2009 election. Its geographic remit is the Dublin Region which includes Dublin city and the administrative counties of Dun Laoghaire-Rathdown, Fingal and South Dublin.[1]

Note: The columns in this table are used only for presentational purposes, and no significance should be attached to the order of columns. For details of the order in which seats were won at each election, see the detailed results of that election. 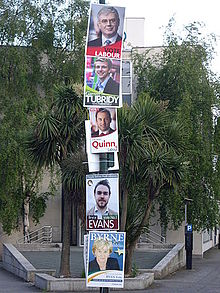 For the 2009 election, the constituency was reduced from 4 seats to 3.