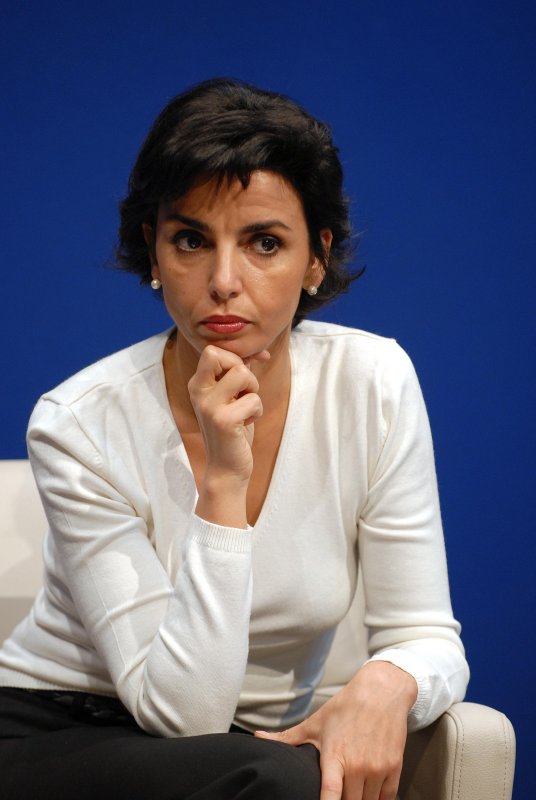 Rachida Dati ( _ar. رشيدة داتي, born ) is a French politician. She holds two nationalities, French and Moroccan (French by "" and Moroccan by "") &ndash; although she calls herself "a French woman of French origins". [ [http://www.linternaute.com/video/politique/5364/qui-est-rachida-dati/ Rachida Dati : "Je suis Française d'origine française"] ] She was a spokeswoman for French presidential candidate in the election of 2007. Sarkozy appointed her Minister of Justice on .

Dati is the first woman from a non-European immigrant background to occupy a key ministerial position in the French Cabinet. [ [http://news.bbc.co.uk/2/hi/europe/6596235.stm Profile: Rachida Dati] , BBC.co.uk. Last updated 18 May 2007.]

She was elected mayor of the of on .

Born in Saint-Rémy, , to a Moroccan father, a , and an n mother, Rachida Dati is the second child of a family of 12. She spent her childhood in in Burgundy.Fact|date=September 2008

After attending Catholic school, she began work at 16 as a paramedical assistant. She then worked for three years as an accountant at while continuing her studies in economics and business management.

After meeting in 1990, she entered the audit management team of Matra Nortel communication. She later spent a year in at the , in the records management and archiving department. In 1994, she was an auditing supervisor and secretary-general of the bureau of urban development studies at Suez (then Lyonnaise des Eaux). From 1995 to 1997, she worked as a technical advisor at the legal management division of the Ministry of Education.Fact|date=September 2008

In 1997, she was admitted to the École nationale de la magistrature, a public educational institution which offers courses necessary to become a magistrate. Upon leaving in 1999, she became a legal auditor at the "tribunal de grande instance" (high court).

She went on to become judge for collective procedures [Equivalent to bankruptcy courts in the U.S.] at the " _fr. tribunal de grande instance" in and eventually an assistant to the of the Évry tribunal.

In 2002, she became 's advisor, working for him on an anti-delinquency project. In 2006, she joined the (UMP) party. On 14 January 2007, she was named spokeswoman for Sarkozy on the day he was chosen as UMP candidate for the presidential elections of April 2007.

Dati has been criticized by the satirical weekly "" for her methods (perceived as rushed and uninsightful) and her demeanour (seen as excessively authoritarian), and for her alleged tendency to show off in costly clothes, mostly . [ [http://www.bakchich.info/article2239.html Rachida Dati : fashion victim?] ]

In September 2008, Dati announced that she was pregnant and would be a single mother. She revealed her pregnancy to a group of reporters who questioned her about mounting rumours. "I want to remain careful, because . . . I am still in the risky stage. I am 42," she was quoted as saying. [" [http://www.welt.de/politik/article2392235/Sarkozys-Liebling-Rachida-Dati-ist-schwanger.html Sarkozys Liebling Rachida Dati ist schwanger] ", "". 3 September 2008.]