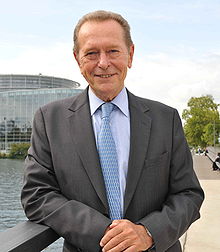 Dominique Baudis (born 14 April 1947 in Paris) is the French ombudsman. Formerly a journalist, politician and Mayor of Toulouse, he had been a member of DL and later of the leading centre-right Union for a Popular Movement.

He led the UDF-RPR list in the 1994 European election.

In 2009, the UMP nominated him to lead the UMP list in the South-West for the 2009 European election. His list won 26.89% and he was elected to the European Parliament for a third time.[1] For the first time, the Presidential Majority (meaning all the parties gathered around Nicolas Sarkozy) scored four Seats in the European Parliament, two more than the Socialist Party, French South-West's leading force. In some urban areas, as Toulouse, Bordeaux, Bayonne or Montpellier, he scorded more than 30%.

In July 2009, he was elected Vice-President of the Commission of Foreign Affairs of the European Parliament, and on November 2009 he was named rapporteur on the Association Agreement with Syria.

Baudis was nominated by the Prime Minister to the new office of Defender of Rights, essentially an ombudsman role, and was appointed by the Council of State with effect from July 2011.