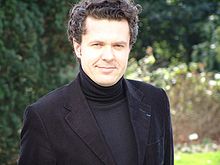 Christophe Béchu (born 11 June 1974 in Angers, Maine-et-Loire) is a French politician, President of the General Council of the Maine-et-Loire department since 2004 and Member of the European Parliament elected in the 2009 European election[1] to 2011 for the West France constituency. A former member of DL, he is now a member of the leading centre-right Union for a Popular Movement.[1]

He has represented the Canton of Angers-Nord-Ouest since 2001, and was re-elected there during the French cantonal elections, 2008. However, he was narrowly defeated by the incumbent PS mayor of Angers, Jean-Claude Antonini, in the 2008 municipal elections.

In 2009, the UMP selected him to lead the UMP list in the West constituency ahead of the 2009 European elections. He was elected to the European Parliament as a result. His list won 27.16% of the vote and three MEPs. He resigned in January 2011. He losted the regional election of 2010 to become president of Pays-de-la-Loire region, but was elected regional councillor. In September 2011, he was elected senator of Maine-et-Loire, he resigns from regional council of Pays-de-Loire.